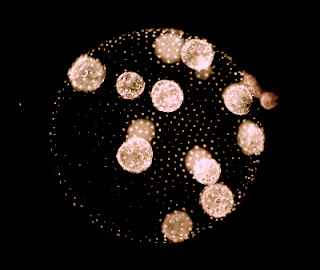 Here is what your character knows about Seeking Orbs:

Here is what your character does not know about the Seeking Orb, but you do:

How about a list for keeping track of who has had the ball, and who has it currently, for the titillation of the public?

How exactly does the Ball hop between gameworlds? Does it only go from gameworld to gameworld when characters are used in multiple games?

Either way, cool idea! Love it.

Never mind... missed the "some campaign somewhere" after Orb dissolution.

there is a provision for that in the rules here

I just might put one of those in one of my games... It's probably not going to be even a D&D campaign, or maybe not even fantasy. But if it's a multiverse anyway, what does that matter?

Who creates the next orb when one dissolves?

I'll tell you when it happens.

So long as it doesn't have a chance of overlapping FLAILSNAILS games I think it's ok. If there's more than one at a time int he same bunch of campaigns it might dilute the idea.

Maybe call it something else, too...

let a character keep the orb for longer periods. the longer you keep it, the bigger the bonus gets, but there are increasingly unpleasant side effects.

the orb records all actions of the character using it and the creature created when the orb dissolves is shaped by the character (and his actions) that had it the longest. the longer you keep it, the more the creature is either similar to/interested in/attracted to/whatever the "creator-character".

that way it's more than just a bad guys on a timer.

That would completely defeat every single element of its purpose.

It has to move from PC to PC quickly and not be something that distorts anyone's campaign very much or that people would fight over or that a PC would keep.

And of course it is a villain on a timer, the interesting element is _whose campaign does the villain appear in_.

It is not a highlight, it is a device to use to highlight other things.

make the penalties harsh enough and the orb will still be passed around quickly. somep players will hold on to it a little longer to benefit from the bonuses. these will shape the creature.

in what way would anything be "distorted"? isn't the idea of player actions creating a monster appealing?

If someone holds on to it (or has to think about it at all, really) then it isn't doing its job.

The idea you have is interesting, it's just a whole separate idea

I have never been involved in Flailsnails games, I don't get around multiple games. That aside I love every thing about this idea, wish I could implement it.