Go forth, Mount your Beasts, and into their Gullets stuff Bread Crumbs Of Divers Sizes, Part 3

In Chapter 2: The Red Hand Of Doom module powerfully evokes all the ignoble and fascinating terrors of war.

No, wait, it doesn't do that, this table on the Middenmurk blog does.

Use it if you get it in your head to run this ridicularious wad I'm in the middle of reviewing...

...summarized by Mandy as follows:

The implacable horde trudges ever forward laying waste to everything in its path.

The PCs can hang around the wartorn villages and deal with all the murder and pillaging or go seek aid elsewhere.

A bunch of hobgoblins. BUT WAIT! "These hobgoblin warriors are armed with composite longbows instead of javelins as described in the Monster Manual." Whoa. THAT'S NUMBERWANG!

These are mainly disappointing for the amount of space they take up on the printed page, but shouldn't be actually that bad to play out. The better ones include...

One of the injured townspeople is actually a shapechanging spider-woman wizard spy.

The monsters set a trap for the PCs using fake prisoners to lure them in.

There are detailed contingency plans for if the PCs get captured (down to which room of which dungeon they'll be locked in depending on what version of their plan the horde is enacting) and if they try to sneak into the main camp and assassinate the army's bosses (down to the names of the pair of ladies sharing Kharn's bed. I told you everything I know I learned from Tiamat.)

The advice on handling interpersonal roleplaying using skill checks is solid: if the PCs' approach is good, add a bonus to the check, if it isn't, deduct a penalty from the check. Not that anyone should need that advice, but it beats a lot of modules I've seen, where the player's tactics are completely ignored outside combat. Again: Expedition To The Ruins of Greyhawk, it is in the direction of you which I am looking.

The random encounters here have more hydras and manticores on them. Why they aren't invisible I'll never know.

I won't say I expected it to be. Official D&D modules are always like that, you ever notice? Dragon Mountain is about a bunch of towns and then a bunch of kobolds and a dungeon set up like It's A Small World, not a dragon, Expedition to the Barrier Peaks is about going to a space office building, Temple of the Frog is more about laser guns than a creepy amphibian religion, Dwellers in the Forbidden City is about monsters in caves, Castle Greyhawk has Spock and Kirk drinking beer with Spider Man with four arms in the background, and even Ravenloft is not a gothic horror but a themed dungeoncrawl about as spooky as Frankenstein meets the Wolfman. Why can't anyone at D&D ever seem to just decide that after you name an adventure after an evocative and cool idea then make the goddamn adventure about that cool idea?

Anyway the elves have giant owls and don't even have the decency to therefore live in a weird owl-accessible aerie with crazy beams or levels or a giant dovecote or whatever. They just live on a hill. If you're gonna have 6th level PCs face an army with ninety manticores and ten dragons in it you might as well take advantage of how nuts you just made everything.

Here's a nice touch: evidence of a dead elf is found in the what-i'm-just-gonna-call-a-dragon's teeth, so the elves have a funeral. That gives the PCs something to interact with once they come back, and they can make some Perform checks to impress the elves at the no doubt Burning-Man-esque festivities afterward.

Then the PCs have to infiltrate a city of lizard men and reptile women and there is another good GM tool: a list of what PCs see if they observe for one, then two, then three hours, etc.

Only even though it is an abandoned, flooded city, the lizard people don't get cool sword & sorcery digs like the Fiend Folio told us they did... 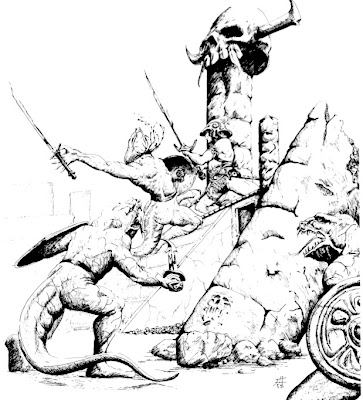 A long dagger has been thrust up through the table from below, its thin blade protruding from the table's center. No less than three dead frogs are impaled on the blade....Their latest favorite game is one they invented called Stupid Frog, in which the hobgoblins lake turns trying to impale frogs on a dagger blade stuck in a table.

This is where all of the creativity went in this module: into making up games for humanoids to be playing when you interrupt them so you can have a Level Appropriate Tactical Encounter. See also Let's Eat Beetles from last chapter.

This module would be a million times better if the default supported path was trying to fool goblins by murdering frogs and eating bugs instead of trying to impress elves by dancing at a funeral.

There's a dragon. But, more importantly, his boss, Wyrmlord Saarvith (hobgoblin ranger) is, just like Wyrmlord Koth (ambitious bugbear sorcerer and last episode's boss) an amateur taxidermist. He's stuffing a stirge when the PCs show up.

What? The? Fuck? Is going on in the Elsir Vale taxidermological community? Is it all Wyrmlords? Did they meet in the same class? Was there a classified ad? "Are You An Evil Humanoid With Class Levels? Do You Enjoy Putting Stuff In Animals After They're Dead? Do You Know A Dragon? If So, Contact Azarr Kull At Location K--No Experience Required!" Or maybe this is the Teachings of Tiamat...

This goes wholly unremarked in the module and so far as I know no-one on-line has noticed it either.

I wasn't expecting Numberwang to show up here.

Clearly the module designer had some strange Yojimbo notion in his head where the PCs could promise to find various dead monsters for the two bosses to stuff and thereby play them off against each other.

Having had this central idea for the module nixed by the main editor he's cleverly sneaked it in anyway.

For bonus points, he even managed to reference it in the title of the adventure without anyone realizing who's hand it was, and why it was red. The stirge, however, knows only too well.

Oh god I am dying here. The doom that came to dead stirge.

I want the prequel adventure where you play as the future wyrmlords who all try to impress Azarr Kull with their taxidermy. They have to find exotic creatures from Witchwood and fight teams of competing amateur taxidermists.

It's almost like this module was written for this review. So everyone would have a great laugh and then play a real adventure.
On the other hand: I never thought about the Taxidermy skill level my evil warlords had. Maybe that's the reason my players always won the adventures in my campaigns. A crucial element in every warlords skill set was missing...

Gotta say, the Numberwang skit never made me laugh but the out of context reference here had me laughing out loud.

Red Hand of Doom is pretty bad, and it's a great read when you destroy a crappy module, but wouldn't you like to try reading a better adventure for change? From the 3e era, as far as I know, Silver Marches is pretty good. If you ignore the stuff on additional classes, monsters, etc, you get a decent - I think! - sandbox setting with a Sword&Sorcery feel.

I don't believe you because I have, honestly, yet to see a decent published adventure of any size, ever, in history, from any company. But I have never seen Silver Marches so I'd look at it.

Have you (Zak) read any of the Pendragon adventures? On balance, I think the short ones, as well as Stafford's long ones, are really good.

I have read The Great Pendragon Campaign. It is a bunch of dead-simple railroads strung together.

But given the Pendragon structure I think that's somewhat the point. I don't see any use for them otherwise however.

Even though I laff at the the hippie Starsong hill elves, I can see myself DMing a similar portrayal of elves... albeit because I would find it a hilarious skewering of elf cliches.

I don't know if that was the case in this instance of just burning man otherkin crystal collectors writing for wotc?