After being my usual blindly-angry-that-things-written-for-children-half-a-decade-ago-are-crap self yesterday about the introduction to the Red Hand of Doom module, we now move on to the actual adventure...

-Exciting restatement of some stuff we already read.

-Players, depending on the dice, get ambushed or would-be-ambushed by a mixed party of hobgoblins with hellhounds.

-Our first designer notes! They just amount to How Hard Should I Make This? advlce.

-One of the orcs is invisible. Those of you who have read my rundown of Greyhawk (or any high-level 3e module) will be less than shocked to hear that invisibility, a power so potent and wyrd that Red Hand's most obvious literary and cinematic stylistic forbearer saw fit to grant it to but one creature at a time and even then only with the help of the most powerful object in its entire mythopoeic structure is being thrown around in the first encounter by some CR 3 yutz. Get used to it.

-The town of Drellin's Ferry and its people are detailed in 29 entries and 3 pages. These reveal: it's a town. The only details even remotely unusual enough to be worth the column inches are:
The rest takes such a long time to say so little that it could give Undermountain a run for its money. Everyone responsible is a bad person, let's move on.

-So the PCs roll up on the town, meet the town watch and probably don't fight them. Then an NPC shows up, explains the plot and offers them a Quest: there's a titular horde of monsters in the Witchwood (which is a good name for a wood)--slay them.

-Then you gotta see a man in a cabin about a trail. He has pets, which is the worst thing to have after 1999 in D&D because, this being the WOTC era, it necessitates spending another page explaining the CR of the dogs and what happens if the PC fights the dogs and how much cover the logs outside the cabin provide and how many hit points their collars have and Wild Empathy checks and generally takes a rusty grater to your beaten broken battered gamer soul and saws and saws until the visions begin to come and these visions are dark.

-"Wouldn't surprise me if some of the goblins are holed up there. Just the sort of thing damn goblins would do." SERIOUSLY ALL GAME DESIGNERS: STOP WITH THE RUSTIC CABIN BUMPKINS. Rustic cabin bumpkins make everyone's life worse. Yes, this includes the one in Death Frost Doom.

-In a shocking twist, the bumpkin does not like the goblins either and wants to help you find them.

-Hydra in the water under a bridge. Hydras are fun. Fighting on a bridge is fun. Ok.

-The gatehouse is partially collapsed, as is a section of wall to the south. A small wooden building sits next to the remains of a long-abandoned garden in front of the structure. The walls surrounding the keep are about fifteen feet high, with a two-story tower looming in the southeast corner of the courtyard within. Large boulders lie strewn amid the ruins of the two watch towers, and a massive humanoid skeleton slumps amid the ruins of the northern one. This skeleton still wears tattered fragments of hide armor, and a large club lies next to one of its bony arms.

I was at the Gore family estate in Virginia once. It looked exactly like that--except the skeleton, of course. It was normal-sized. I think it was Adlai Stevenson.

Anyway, here we are in the gatehouse, which is the main fightin' here.

-An entire column given over to say A warrior was slain by giants here, it is said his ghost still haunts the gathehouse except plus a lot of details that don't affect anything in the game or matter and are boring. 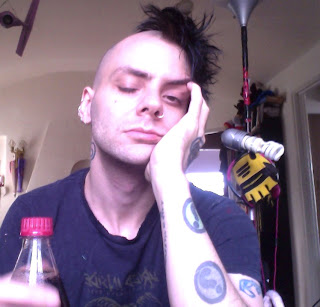 ...I flip a few pages to see how much longer this chapter is.

-On page 27, some goblins are playing a beetle-eating game. That's fun. This also marks the first original idea in the book.

-There is a manticore in a room and a minotaur in a different room. Also I am listening to the Stones' Sister Morphine right now.

-The ambitious bugbear sorcerer is an amateur taxidermist. He stuffed an owlbear. It's in room 8. What am I dooooing in this plaaaace, whyyyyy does the doctor have no faaaaace?

-Then there is the first awesome thing in the module (and another thing Expedition To The Ruins of Greyhawk should've had) a goblin battleplan picture that the players can actually look at with stuff that matters on it that players can use to plan, interdict and disrupt the upcoming goblin plans in the coming campaign and plus bonus stupid goblin graffiti saying "Death To The Humans!" and all whatnot. Inasmuch as this map may actually be worth paying for, I will only reproduce my favorite part of it here:

-On the roof there's a fake ghost that's just some old dead body rigged up by the bugbear to scare people away because I guess the ambitious bugbear sorcerer amateur taxidermist thought he was a villain in a Scooby Doo cartoon instead of a guy with his own manticore.

-In other news, there's a dragon. He drinks a Potion of Bull's Strength. I'm not entirely certain the authors know what a dragon is.

-He also drinks an invisibility potion.

-Now you're fighting on a bridge. They also seemed to have missed a trick with the monster selection here: the PCs have to demolish the bridge while fighting a young dragon. It'd be way more fun if they had to fight giants here because then the PCs could come up with the idea of trying to trick the giants into smashing the bridge for you with their boulders or their great galumphing stride. The dragon's kinda young and just breaths chlorine gas, not acid, so not up to the task, really.

-The text assumes the players will find the area on the charmingly graffitied battleplan that says "Vast Monster Horde Gathers Here", take a look at it and then run off to warn the townspeople in their path. There are provisions in the module for what is in my experience the most likely course of PC action: the players grab someone's invisibility potion, make a bee-line for the goblin camp and try to identify and assassinate the horde leader outright--but they're in the next section.

-While it doesn't set the world on fire, it's fair to note the book does do a good job of describing how townspeople will react to various things the PCs could say ("There is a horde coming.""By horde you mean like 12 right? Not like 100,000 or anything...."") and when it's time to discuss evacuating Expendableville the various positions the handful of council members' will argue for are concisely represented and cover the plausible spectrum, thus making the pre-Monster Katrina pow-wow an interesting and eminently runnable noncombat. These two bits are by far the most GM-friendly presentation of NPCs and how to deal with them I've seen in a WOTC module.

-There's some encounters provided to harry the town with before the main attack. They're just that: encounters. About as interesting as rolling the encounters randomly would be.

-The chapter ends with the horde rolling up on a wisely evacuated or foolishly defended town. We'll see what happens to PCs who aren't dead or off the rails cooking up schemes to polymorph into goblin wench spies next time in Chapter 2: The Ruins of Rhest...

I assume the only bright point is that they did not stat up Ambitious Taxidermist Ghost Faker as a prestige class.