Stuff in black by him, stuff in blue by me. 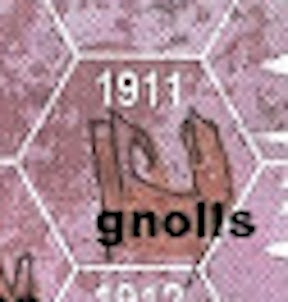 Besieging a Chaos Gnoll fort. ~50 Gnolls, Each one at least 4HD, and at least 2 Witches and 2 Superbadass warriors... Commanded by the exemplary GM,+Zak Smith.The PC force is Sir Manning's Warband (~130, primarily Amazons, with some goblins, elves, drow, panthermen and beastmen, mostly 1HD) allied with some Goblins of Gaxen Kane (~120 1HD Goblins).

(Recruited one unit at a time over the last few months and bought off with favors, gold, and promises of victory. -Z)


(This refers to the fact that Chris had earlier in the day consulted the Astrologer's Consortium and randomly rolled the fortune "One you hope to surprise will be expecting you and one you love will be set on fire". What witch wouldn't use those stars? -Z) 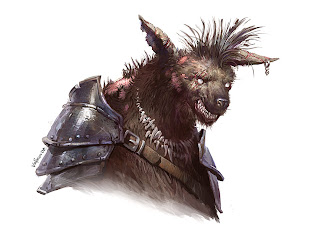 25 Gnolls charge forth from the fort! The jungle shakes with their roar, as their hooves churn the strange jungle earth. The vile, inscrutable creatures are met in the open with Bolts, Arrows, Bola, A Fireball (from +Ian Burns' Morgan) and a well placed Entangle. Despite this, many gnolls reach our line, where a fierce battle rages. Sir Manning duels their Extremely Strong leaderbeast, and Koot Druid-shifts into a bear to confront a sublieutenant. The beasts are strong and fast, delivering heavy blows with terrible weapons. Manning remains calm and defends as well as able, and Kootenai strikes home with ursine claws.
After a furious minute, Manning is on the back foot. Koot too is looking rough. Morgan raises his hands and draws power from strange places, before putting the largest beast down with a horrible Phantasmal Killer

Manning siezes the opportunity, removing and then flourishing the foul LeaderGnoll's head. 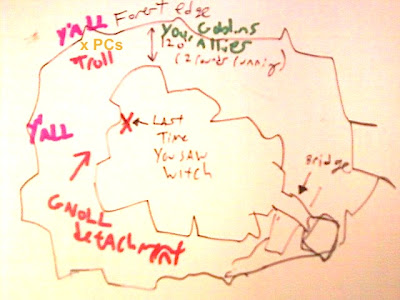 Some inspiring words and roars of victory force the surviving Gnolls to flee to their keep. The sublieutenant goes down in retreat, from a well placed Magic Missile, and several more beasts are trapped and slain from Amazon Bolas and Spears. A fortunate victory with minimal losses, team Manning, though PC resources are low.


Kootenai demands another Lightning Bolt leap out of the heavens, after Morgan dispels the Witch's barriers. She survives the tremendous blast, taking a crossbow bolt from Manning for good measure.... Gesturing menacingly, the creature descends farther into the keep, beyond sight. From within, she summons a Foul Shelled Troll to rush poor Kootenai, determined to end the torrent of electricity. Hurriedly, the thing is intercepted by Sir Manning, 3 Beastmen and some swift Panthermen, who bear down on it with broad weapons and scything claws.A fierce battle ensues, as the main forces exchange arrows across the field. Manning is knocked down and unconscious as the troll unleashes terrible blows, but is dragged to safety by the lovely and enigmatic Olgreth. Manning's loyal beasts continue to drive their weapons into the thing, as Kootenai's summoned Insect Swarm keeps it at bay.


Manning regains his feet, praise Vorn, to do battle again. A second sally of Gnolls spew forth from the gate, headed in the direction of the critical Troll Battle. Manning gives orders for infantry to intercept the push at the treeline, whilst death flies from the forest into their advance.

(Also, the trolls eyes roll out of his head, hit the ground, sprout spider legs and begin walking around on their own...)

(This is how it'll work:

Ok, so assuming you don't do anything especially tactically intelligent/relevant and just went ahead and ordered a charge on the battlements, a full on combat would be resolved something like this:

(superior gnoll losses have been accounted for in the smaller "model" versions of the combats)
(also: keep in mind gnolls have cover (+2 AC) and high ground (+2 to hit))
________

UNIT 1
White Elf Warriors: 13 (7 have Bows)
vs
3 gnolls (in cover behind battlements)
which will be resolved as
5 White elves
vs
1 gnoll

Warpig: 1 (I guess the Goblin Lieutenant has it)
(assume this is strategically irrelevant)

UNIT 4
Yellow Pterodactyl Tribe Amazons (w/bolas):50
vs.
12 gnolls
which will be resolved mechanically as
6 Yellow amazons
vs
1 gnolls

UNIT 5
Red Pterodactyl Tribe Amazons (with crossbows) 26
vs.
6 gnolls
which will be resolved as
5 red amazons
vs.
1 gnolls

I suggest that you assign, for convenience sake, a number of units (1-2) to each player (not necessarily PC) to control. ﻿

....
Essentially from now on, mathwise, every time a PC kills an ordinary gnoll, you can add 4hd worth of troops to your side in any unit you want.

If one of your units gets so big that the estimated model combat beneath is no longer inaccurate in your favor, you add a unit to the estimate.
Like: lets say Scrap kills a regular gnoll in personal combat.
You may then add 4 amazons to unit 5, making the total 31 red amazons vs 6 gnolls.

This means the 5-to-1 estimate is no longer accurate, it favors the gnolls. So the estimate is revised to 6 to 1.
You don't actually get more troops, of course, you just jigger the numbers more in your favor.﻿

...
Also, you can pull in NPC troops to help with the leaders, you just get less xp at the end and the number are less in your favor.﻿
_________________________
Will Kootenai's next bolt strike true? Can the incessant stream of stormy death continue to force the Gnolls from their bastion?Will the Troll go down before it destroys either Sir Manning or the valiant Kootenai? Will the Infantry reach the Gnoll's push in time? Or will Sir Manning be overrun?What cruel tricks have the Witches still remaining? Can the fort be taken, or are the foul magics too strong?

Join us next time, all ye PCs of significant/high level with ideally lots of magic or attacks or some way to fucking save our asses and would fit into Zaks game, because god dammit we can win this fight but I'm out of HP and both Chris and I are out of spells.

Check with me, opportunity is limited.

(Game is midnight on the cusp of Monday and Tuesday, Pacific time, if you want in.)


ps I love this game. We are constantly on the precipice of annihilation...

Also, it's worth noting that Manning has been hit for 19 damage by a single creature, twice. Also 11. Also 13. In about 6 rounds of melee. Manning has effective AC 23.

Come along, it will be great.

Now that was a fine recap. Sad that I'm on East Coast time.

Wow, i would love to be in one of your games.
But I fear Pacific Time and CET don't mix very well.

Same here. Been thinking about trying to join in on this for some time. If just for the experience. Just to say I did.

My 4th-level thief will save you!

How exactly do I get in on this?

Update: Victory! Thanks to the pool of FLAILSNAILS that came together for this, particularly Mr 103 damage Magic Missile Blackletter up here.

Also; divide and conquer is still a really great strategy.

Also; I still don't know how my fighter is supposed to work.