"Combat takes too long in (whatever game)".

You hear this a lot as if it means something, which it doesn't--in Warhammer 40k, combat takes 6 hours and it rocks and you don't do anything else.

What people mean is usually either:

Most RPGs I like have some mechanisms in common:

And sometimes:
Roll to dodge

These bits all should be treated in different ways depending on what kind of combat you've got going on.
__

There are two common categories of combat in these kinds of games, roughly break-downable to...
Hard-To-Hit-But-Low-Hit Points and Easy-To-Hit-But-Lots-Of-Hit-Points.

For convenience sake in this thing I'm saying here I'm going to call them Gritty and Swashbuckling.

Obviously this is a simplification.

Obviously this is a simplification. (Did I say that already?)

This is a place where GMing overlaps design--both of the system and of the encounter:

Anyway point is in a Gritty combat you have a pretty good chance of dying or at least being out of the fight decisively nearly every round (whether or not the method of death is actually genrewise "gritty"--for the sake of this thing I'm writing here, making a saving throw to avoid dying under a cotton-candy choke cloud is still "gritty"), in a Swashbuckling system you don't.

Long-term survival in Gritty systems is often about making sure the environment and the circumstances of the fight are on your side before the fight even starts, and sometimes the standard systems can be so volatile they're about trying to avoid interacting normally with the combat system period.

(...as Odyssey explains in this post. A post everyone who has ever believed the phrase "the game is about what the rules are about" needs to read.)

Swashbuckling systems are often about having a complex ebb and flow to combat once it starts, with extra room for unusual tactics and situations to develop after the initiative roll.

If you make every step in combat long and involved and interesting then people have to wait too long before it's their turn, so it's important to figure out what role the fight is playing in the game overall and then pay attention to the parts of it that should be fattened up and let the other parts starve.
__

In a Gritty system, initiative, to hit and damage are all psychologically gigantic. Because the players hang on every one of these rolls.

You lose initiative, everyone holds their breath.

But only if it's group initiative--if it's individual, the stakes are much lower. Then its just a logistical step (Mike-4, Lisa-5, Jack-3, Goblin-3) that has no immediate implications unless the players are particularly afraid of a given specific foe's abilities.

Then you roll to attack the players' characters...3 misses and one hit. Everyone's eyes get wider.

Then you roll damage for that last hit "Ok, if this gnoll rolls a 5 or better, Mandy's dead..."Everyone's on the edge of their seat.

In gritty systems, the idea is to take each of these steps and load them with the highest stakes possible (which may be why I prefer group initiative for this). They can be mechanically simple and can even be described in simple ways by the GM because the Vegas effect fully kicks in: much of the "storytelling" is done by the fact that so much rides on each toss of the dice.

On the other hand, you want to keep the steps in a combat round as a whole short because a lot of people are going to miss during a Gritty fight (they have to, or else everyone would die in every fight) and, as Jeremy D said "Missing sucks way more when the combat round is long".

So Gritty: a few steps, but load each step with high stakes you can watch unfold. The dice tell a lot of the story, because you've set it up so their contribution is interesting.

In a Swashbuckling fight, the idea is the combat round could easily be full of steps so long as it is complex enough to give everyone something to do all the time.  In Marvel FASERIP (one of the finest Swashbuckling engines ever devised) you might roll against your endurance on a Stun chart, (a chart with 4 possible qualitatively different results and an option to modify the roll) even when it's not your turn.

The key in a Swashbuckling engine is to use a long combat round to pass the "ball" around to as many participants as possible, so that one (long) round of Swashbuckling combat involves as much repositioning as 3 (short) rounds of Gritty combat.

Any mechanic that brings other PCs into a fight should be exaggerated in swashbuckling combat: area effects, movement effects, grapples, reverses, double-teams, etc. The trick in Swashbuckling combat is for the fight be a totally new fight at the start of each round.

Initiative in a system like this should probably be either extra simplified (simply the quality of "going first" divorced from an actual described action is not a visualizable moment on its own--it's not the main event, the player and NPC actions are, so as a step in describing the fight it's just in the way) or made maximally "gamable" (trading initiative could become a vital tactical minigame with all kinds of ways to game it and set up your friends). Regular once-per-round group initiative just slows down what should be a pinballing back-and-forth of characters tripping over each other.

Damage can be flattened in a system like this (lasers do 20 points, period) because damage alone is often less important than several other factors--where the body falls, who is close by, what round it fell, what it fell into, etc.

Dodging as a separate mechanic is great in these systems because it gives a player something to do even when its not his or her turn and adds more narrated detail, which, while helpful-but-ancillary in a Gritty fight, is essential to make a Swashbuckling fight sing.

Here's a still of me GMing and trying to do just that--performing a physics test to see which direction the Hulk would fall when the cyborg T Rex he was riding collided with the cyborg T Rex Iceman was fighting. The Hulk was represented by that bottlecap wedged between the green dinosaur's spines on the right... 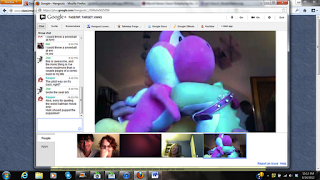 Like any comic book, there's no chance the Hulk is going to die in this scene and we all know that, so rather than rely on tension, we have to rely on making the event itself a mini-story.

The fun in a Gritty fight is a thriller or horror movie kind of fun about the tension of what's at stake, the fun in a Swashbuckling fight is an action movie about how exactly it goes down.

In a Gritty fight you want to control the camera and the film speed and the music, in a Swashbuckling one you want to concentrate on the choreography.

So, yeah, mix and match to taste-- Lotta continua and all that.

But didn't you just clearly and explicitly prove the opposite? By looking in a rule book I should be able to tell if the system is rigged more toward Gritty or Swashbuckling play, right? If they have lots of Marvel-Stun-like charts, and flat damage weapon lists, and no group initiative, etc-- we at least know what the designer thought combat in that game should look like.

Simply:
The game is *not necessarily* about what the rules are about.

So I guess pre-hitpoint-safety-net D&D is Gritty at low levels and Swashbuckling at high?

Zak, love the ideas here. Now that you are an award winning game designer(tm) have you given any thought to something like Vornheim the rpg system?

You could run a kick-starter type fundraiser for it so you could be sure it would cover the time investment before you started. You already have so many great rules insights in your posts and a kick ass test group readily at hand it seems like a perfect storm.