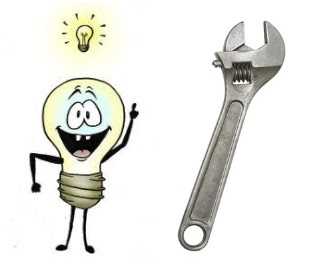 Ideas are like "Ok, it's like a sphere with a big eye and an evil little mouth and a bunch of eyestalks and all the eyes have different magic powers and I call it a Beholder".

Tools are like "Here's a way to generate 18 dungeon rooms complete with contents at once".

You judge ideas on whether you could have thought of them yourself and like them.

Tools don't have to have things you wouldn't have thought of yourself, they just have to organize and present lots of ideas (original or old) quickly and/or conveniently so you can build other things with them.

Both are great, naturally. But when people talk about RPG stuff they often talk past each other because one person's judging a thing's ideas and another person is judging the tools.

The AD&D DMG is fantastic for ideas. But while it has a lot of tools in it, they're hard to find and have been superceded by other stuff.

Retroclones, as tools, are frequently better than the original D&Ds they clone.

Products detailing tons of hexes, like the Wilderlands and Carcosa, are pretty sparse in the ratio of ideas-to-pages, but they're meant to be, they're tools for endlessly recombining a relatively short list of moving parts to create an environment.

Published modules have always kinda disappointed me on the idea front but people often defend them as tools. I find they often take longer to prep than it'd take me to write my own thing, so they fall down as tools as well.

The Monster Manual was fantastic as both. Deities and Demigods was all ideas and no tools (at least until now).

Rifts is better than most games for ideas, it's a disaster for tools.

My favorite RPG books, Realms of Chaos: Slaves to Darkness and Lost and the Damned, are mediocre tools (I rarely consult them) but bursting with ideas.

Ideas are more glamorous, but once you get them you don't need the book they came in any more. Tools are no fun to read but you can use them forever.

Random tables can be either....
You can have a Random Weather Table which is all weird stuff (rain of frogs, etc) or just interesting mechanical ways to express the effects of rain, wind, etc.--that is, a table of ideas, or you can have a Random Weather Table that's just totally realistic for a given place--that's a tool. Or, of course, you can have one with both.
-
-
-
And now a word from our sponsors...
TODAY IS THE LAST DAY TO VOTE FOR THE ENNIES

Am I being paranoid for thinking this is about my comment on PIG-PIP 0.o? If I'm interpreting this correctly as you saying that your intention for PIG-PIP is for it to be an idea rather than a tool, I think that's totally reasonable! That's just not the impression I got, but in that case I was mistaken. If I'm misunderstanding this as well, then I dunno :/. Or I really am just being paranoid and this has nothing to do with that, in which case feel free to ignore this comment!

You are being paranoid