Ennies We're Not Going To Win (But We Already Won) 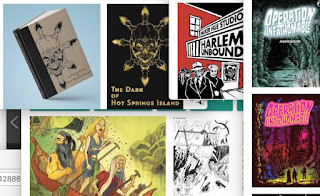 So on July 4 I found out Frostbitten & Mutilated was nominated for 6 Ennies this year! That's more than any other product but we're going to lose them all. This is good news--because we're not gonna lose because of the expectable backlash against a product about half-naked women giving people abortions in the snow, we're going to lose because there's so much that's fucking good this year.

This is the best Ennie year yet for DIY RPG stuff, and I feel like I already won everything I wanted to win just looking at the nominees:

I have been running this at home now for months. That's the highest recommendation I can give to an RPG product and literally something I've never said before. There's never been a hexcrawl book like this in terms of usability plus making Ela's eyes light up when she got the special players' "notebook" accessory. Wonderful.

The first time DIY D&D met the Ennies, Vornheim lost to a bunch of dungeon tiles. I'm 100% sure Cecil is gonna take this because it's something people actually use.

It's awesome to see some diversity in horror, and they had the good taste to hire some people I have a lot of respect for: Brennen Reece and Alex Mayo. And Brennen's cover is not the same photobrush-concept-art look. It references the Harlem Renaissance without being a bloodless pastiche. Harlem also gets a nod for best rules!

Best Art, Interior by me. But my book's black and white and up against Starfinder so fml.

Best Electronic Book: The Scenario from Ontario from Kiel of Dungeons & Donuts and Zzarchov Kowolski. Terrible title but these guys' credits are getting seriously impressive. Blood In the Chocolate Thulian Echoes: these are modules people will remember when the dust clears.

Best Free Product: Vaginas Are Magic by James Edward Raggi IV. Just having this said into a microphone at the Ennies is winning. The fact RPGs have gotten their head out of their ass enough to even talk about this dope magic system even though it has a title that scares nerds is a sign of how far we've come in the last 5 years.

Best Game: Zweihander by Daniel Fox. A Warhammer do-over, which is a good thing. If it loses to Delta Green that's ok--that's a good one, too.

Best Monster/Adversary: me again. And again up against Starfinder. Guh.

Best Podcast:Rey and Kiel Can Do! featuring Kiel Donuts and Reynaldo Madrinian of Break! who was my DM for a long-ass time also: I'd be happy to see Hobbs and Friends of the OSR win.

Best Setting: me again. But up against Harlem Unbound and Starfinder. Though the important thing here is Green Ronin and their sexual-harassment-complaint-flubbing-non-freelancer-paying-asses lose.

Best Writing: me again. Up against Delta Green and Harlem Unbound. Super ok with losing to them.

Spotlight Winners: Fever Swamp by Luke Gearing AND Operation Unfathomable by Jason Sholtis over at Hydra Cooperative. Pulpy slimy goodness all around.

Product of the Year: me again. Up against a lot of shit I'd be happy to lose to: Harlem, Hot Springs, all good.

So this is awesome!

When Ennie voting time comes around I'll probably be like "Hey vote for me!" but I really do mean it when I say I feel like we already won. There's an increasingly diverse body of work that truly deserves it and is often doing something totally new nominated in almost every category.

I'm proud of the people who got nominated and, seriously this is not a rhetorical gesture: I am proud that there is enough of a community to support all these folks. If you're not one of the authors on this list and want to be: you are looking at the tide that is going to carry the thing you make next.

Kicking the trolls out made all this possible. Unfortunately the trolls don't like that 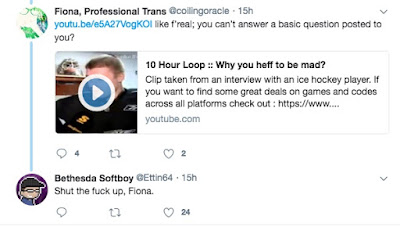 And here he is complaining I called out a sexual harasser. Please report Ettin.

Here's the Dungeon Bastard harassing me for having Charlotte and Stoya--who playtested my game--part of the team--come up on stage with me: 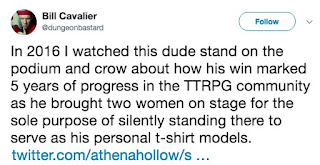 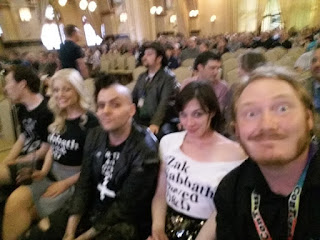 Obviously, as I always say, don't harass them back, but I am verified on Twitter and they are part of a targeted harassment campaign which is against their rules, so if you click over to their tweets and hit the "report" button, sometimes it works and they get suspended. And you're helping save creators a lot of grief in the future and guaranteeing creators and friends can do their game stuff in peace.
-
-
-

This may require more effort than you're willing apply, but I'd love to see the chart for what the group sees when a wandering monster show up, from the post http://dndwithpornstars.blogspot.com/2009/10/wandering-monsters-mandy-needs-your_19.html. The image is gone: it's a post from 2009, so I'm not surprised it may have gone astray in the last 9 years.
Anyway, thanks for all the good posts!

I'm happy that people heard the call to make better games if they wanted to compete. I doubt you walk away empty handed even with all the great material on the list this year. I'm sorry I'll be missing you guys this year but I'll be rooting you on from home!