Several of the Demon City stretch goals have been unlocked, including a whole handful of horrible Filipino monsters from new OSR hotness Mabel Harper, here's one hot off the press, not yet edited or illustrated: 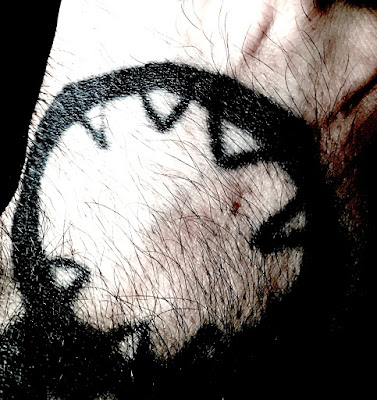 There are quiet parts of a city, far from the commercial zoning, expensive shops, and tourist traps, where the sounds of construction and honking cars and spitting, sneering people are distant echoes--those neighborhoods with abandoned pharmacies, rundown churches on every corner, and colorful graffiti decorating condemned architecture. Sometimes in these places, a baby cries in a dark alleyway. The cries naturally beckon gentle souls to the source; when they arrive, they find a child, small and terrified and alone.

The infant often looks a lot like the person who comes to the rescue. Same skin color and color of the eyes. Sometimes even facial features. The familiarity breeds further goodwill. It’s by design.

When the Good Samaritan picks up the child, the illusion dissipates. The child--no, no, the thing--transforms. The metamorphosis is sickening: bones lengthen and pop into place, flesh grows taut over a bestial visage, and pale, bloodstained fur sprouts over the soft baby skin. The resulting monster is much larger than the victim, and it will devour them.

This is the Tiyanak, a corrupted dead infant who seeks to destroy the good and caring people in this world. Despite what some say, abortions do not give rise to the Tiyanak; rather, its fate is woven by cruelty and carelessness, especially of the ones who should have shown the child care. The infant died young and violently, without a name or a proper burial. Feeling embittered at their fate, without an identity to anchor them, their ghost is reborn as a monstrous spirit to enact petty, violent vengeance against those who would show them kindness. Transference at its bloodiest.

There is only one thing that can end the Tiyanak’s reign of terror: the original infant corpse must be located, correctly identified and named by the closest living relative, and finally given a burial. Only then will the restless, vengeful spirit transform back into a mournful little ghost and continue on its way to peaceful oblivion.

An adventure featuring a Tiyanak is about identification. During the PCs’ investigation, the story of its violent past must be discovered, and either the original perpetrator of the abuse that killed it or a relative of theirs must be tracked down and forced to confront the truth of their transgression. Given that humans are not often willing to confront their own wrongs (the power of denial is strong), this usually isn’t as easy as just tracking down whoever can put the baby to rest. The PCs must also convince them that it’s their responsibility to do penance. This will be difficult, especially if the parent directly responsible for the infant’s death is still alive and is therefore the only person able to stop the Tiyanak.

Devouring Maw: In its true form, the Tiyanak’s maw is filled with hundreds of razor-sharp teeth and can open wide enough to swallow most humans. A successful attack inflicts standard damage and grapples the target. A creature of any size may be eventually swallowed this way.

Infant Cry: When in infant form, the Tiyanak’s cry beckons kind-hearted souls to it. NPCs cannot resist, but PCs aware of the vengeance spirit’s ways may resist by making a Calm check against an intensity equal to the Tiyanak’s Appeal.

Invulnerability: The Tiyanak can be harmed by ordinary weapons, but it cannot be slain by them. If defeated, it will simply dematerialize until the next night, when it will return in perfect health.

Manifestation: The Tiyanak appears near potential victims after the sun goes down, often in lonely alleyways, but really in any place in the dark far away from crowds and a lot of noise. After manifesting, it must move normally and will disappear before sunrise.

The holy symbols of any faith cause the Tiyanak to make a Calm check or flee until said symbols are out of sight. The intensity of the Calm check is equal to the degree of fervor of whoever is wielding it (1-9). In the case of an incidentally encountered symbol (a glimpsed church steeple, for instance), the intensity is 2.

Touching a holy symbol, including holy water, does damage to the Tiyanak as an ordinary physical attack.

If one wears their clothes inside out, the Tiyanak’s cursed infant cry will not attract them.

After the Tiyanak is given a name, but before its original corpse is buried (and therefore laid to rest), the Tiyanak becomes frightened when its true name is used. The monster must make a successful Calm check against the speaker’s Calm each round, or flee.

I'm crushed that I have to wait until next year for this to come out.

The Philippines have some of the nastiest monster legends I've ever heard of. I used to have a Filipina friend on tumblr who told me stories she heard from her family when she was growing up, and they scared the shit out of me.

Obvious questiosn, what if the monster has no living relatives that can identify it, or that had anything to do with he "transgression"?

Then the Host/GM designed the adventure wrong.

@ Charles: seconding what Zak said, but I guess you could have an adventure where the PCs desperately try & get some of the monster's hair or blood to DNA test it and then find the closest possible living relative??? but it'd involve DNA testing a lot of people in an attempt to find a relative ... like d1000 chance someone they just find on the street is somehow related to the thing

.......... yeah, honestly better to just design the adventure with having some relatives in mind