The Dream-Space of Abstract Threat

"Something real and tangible, yet fraught with infinite suggestions of nighted mystery, now confronted me."

The usual sort of nervous academic narrates a story of experiencing a strange split consciousness, being not wholly himself, strange visions and dreams of massive landscapes, compulsions to consult obscure texts. All this is wonderfully done--better than usual, I'd say, Lovecraft in top form: shadowy but crisp, obscured but never vague, never embedded more in the mundane than necessary to feel grounded.

The narrator does eventually get around to describing why all this is happening to him. Spoilers: 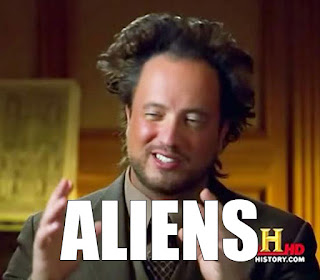 Specifically goofy-shaped psychic aliens that take over peoples' brains and zoom around in space ships, rovers and boats and zap each other with "cameralike" weapons. 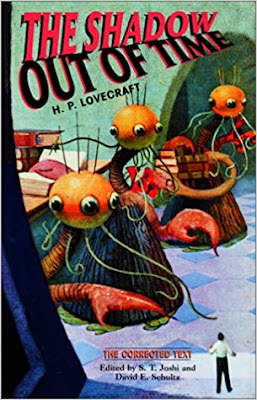 Fun, definitely, but ironically lacking all the emotional and aesthetic qualities that seemed to horror enthusiasts to be distinctive enough that someone decided to coin the adjective "Lovecraftian".

This is one of the paradoxes of Lovecraft: his actual inventions were, if not banal, at least, technically, almost wholly typical of the kinds of pulpy sci-fi of the era. It was how he described them and--moreover--their effect on people, that was magically creepy.

The quality of any given Lovecraft story tends to depend a lot on how he manages the transition from the dream-space of abstract threat (his forte) to actually telling us what the monster is (a big roll of the dice).

My restrictions as a prisoner gradually disappeared, so that some of the visions included vivid travels over the mighty jungle roads, sojourns in strange cities, and explorations of some of the vast dark windowless ruins from which the Great Race shrank in curious fear (Beautiful, awesome) There were also long sea-voyages in enormous, many-decked boats of incredible swiftness, and trips over wild regions in closed, projectile-like airships lifted and moved by electrical repulsion (Wait, you were in a blimp?)

It's not exactly the old cliche that "what you imagine is scarier than anything you could see" I think it's more that the dreamstate of only half-imagining is a more powerful evocative state than the fully described thing. That juxtaposition of that half of it that is nailed down with a few specificities with that other half that could still be anything and you haven't thought too hard about it is essential.

This is one reason why the actual Call of Cthulhu book and its laying out of the "mythos creatures" always seems a little disappointing--although these squidbeasts and tentacled pyramidheads are the lynchpin, justification and most identifiable characteristic of the Lovecraft stories, they aren't the actual heart of the magic.

The magic (as in most horror) is in the delirious prose evocation of the emotion of guessing at and anticipating them. The simple word "Azathoth" contains much more of it than the image or stats in the book. (Lovecraft's first mention of it was in a note to himself that just read "Azathoth--hideous name".)

I think a lot of weird fiction after Lovecraft (and influenced by him) recognized this--and tried to find ways to suspend that moment of not-knowing-what-the-fuck as long as possible. When Ligotti describes language and life itself as the horror he's trying to do this, when Grant Morrison describes a demon as made of the collective despair over like Hiroshima he's trying to do this: the story can't be let down by the final boss' banality because the final boss still has a gap of effective indescribability.

Lovecraft knew the trick, even if he didn't ultimately rely on it: the "non-euclidean angles" and the "concepts beyond our understanding"--these were word-constructs, not descriptions of mere things you could picture and get bored of.

To describe the indescribable space of dream, (by which I mean the consciousness characteristic of real dreams which films and books and games can sometime approximate) I'd say:

There is an unquestioned assumption that something is there and real, without the sobriety, distance and clarity that the mind constantly unconsciously uses to understand the thing's full shape and limits. The important questions that would establish how a thing is in the world are not answered but also never asked.

Games have one disadvantage in getting you into the dreamspace of abstract threat in that in even the spookiest situation you generally know the thing does have stats and is embedded in a world where foes are basically challenges that can be addressed. The possibility of uncontested annihilation is off the table. It always boils down to a bag of procedures or numbers.

On the other hand, games have one tremendous advantage: unlike a short story or film, the game does contain something that is there and is authentically of unknown and unknowable shape--the future of the campaign.

It is undeniable that the campaign will keep going and it is undeniable that no-one can describe in full detail where it will go. The campaign need not simulate the ecstasy of potential dangers and evolutions, metastasizing meanings, it is that. You are in the midst of a genuinely half-shaped and half-shapeless thing. With a book, you could skip to the end and the unknown turns into a package, a product, a mere evocation of infinity, not the actually infinite. In game, as long as the campaign is still on, you are still watching form solidify from a shadow that is not yet used up: continuously and in real-time.

The demon of RPGs means Tiamat is far more statted, described and knowable than she is in any story where she might appear, but it also means what will happen when I meet her is far less knowable. When I pick up the ring it might mean something and it might not.

And that--feeling being in the middle of that--is kind of great.
-
-
-

Hey Zak, have you ever read the necroscope and/or titus Crow Series? If so what is your opinion on them?

They seem to be inpired by lovecraft while still injecting their own personality int he world and charcters.

I was thinking similarly about Vampire: The Masquerade recently. The setting (as described in the 1e core book) was ideal for a game of political intrigue, because you could always add another layer - you thought this guy was the mastermind, but he was really being manipulated the whole time by someone else with a different agenda for an entirely orthogonal purpose, and so on. It's the same kind of thing - you could never get to the bottom of the (ugh) Jyhad, because there was so much left unknown (then, as is well-known, White Wolf gradually took that feeling away by providing long histories and many specific personae, turning it into a game of managing the metaplot rather than horror and mystery).

I strongly suspect the Necroscope books are, much like Doc Smiths Lensman series best first encountered as a teenager.

"Games have one disadvantage in getting you into the dreamspace of abstract threat in that in even the spookiest situation you generally know the thing does have stats and is embedded in a world where foes are basically challenges that can be addressed."

This is from where comes the idea of putting at least one "stone falls" death trap in a dungeon? :)

@elotar Some people who do that, maybe

The philosopher Graham Harman's book on Lovecraft, Weird Realism, sort of talks about the kind of gap you're identifying, between the monster and its qualities. For Harman Lovecraft's stories are a kind of intuitive account or literary dramatization of a fundamental truth about reality - that we never have full access to objects, and that objects are these ultimately strange, unknowable, withdrawn things, which only present us with a kind of sensuous mist of surfaces. The book is overall more interesting as a take on Lovecraft's aesthetics than as a contribution to philosophy.