At the Indiecade before last I was looking at a game by a well-known Indie RPG darling/gadfly:

It was a freeform LARP--presenting, as an avant-garde game, the following scenario: two players play a couple trying to decide whether to get an abortion or not and the third played a doctor. I think maybe they were in Northern Ireland. More or less freeform, with not many further instructions. It made me wonder...

Despite the fact that RPGs (like most art forms these days) are increasingly being called to the principal's office to ask what they're doing to improve the Republic, I've seen surprisingly little discussion of role-playing gaming's near-cousin: role-playing therapy. 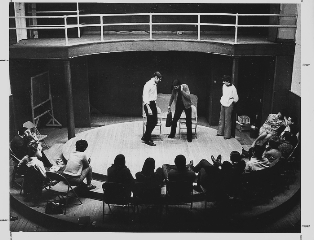 This may be because people don't know much about it, or perhaps because advocates of the socially therapeutic RPG generally like to present their product as radical and new, rather than reaching back toward a practice that's been around for a hundred years.

At any rate, it's an interesting subject, and one no theoretical discussion of the role of RPGs as self-improving or as "exploring difficult issues" can afford to ignore.

When any RPG is presented as intended to clarify or explore a player's real-world emotional or intellectual connection to serious issues we should definitely take a look at the work of the professionals who have been doing a similar thing (though usually without dice) since forever.

The basic method originated with Romanian shrink Jacob L. Moreno and, at least for his lineage, breaks down into two main types: psychodrama and sociodrama. Here he is "GMing" a psychodrama.

In psychodrama, the goal is to help a single person, and the other participants take on support roles which emphasize, reiterate, repeat or analyze that main character's role.

In sociodrama, the goal is to help a community deal with issues that affect the community as a whole, and people take on disparate roles in that community.

Practically speaking, the "deep" exploratory RPG might have elements in common with both.

They both make extensive use of a very storygamey technique (I use this adjective advisedly--it is pointed out as specifically a storygamey technique by none other than Andy Kitkowski, the founder of storygames.com): scene-framing. That is: the group agrees a scene will begin in a certain place.

Many readers may have encountered a form of sociodrama at school--during one of those assemblies where a woman with a scarf comes and says "Ok we're going to talk about drugs! Franklin, you're going to be pressuring your friend Carl to smoke doobies".

The overall idea is: people act out the scene. Then, afterward, they talk about what things in the scene meant, what seemed true or false, what ideas or observations were or were not important. Issues emerge.

Some excerpts from the literature:

Moreno’s role theory of personality holds that the behavior and motives of human beings can be best understood by studying the collection of the various roles through which they interact with others and which give form to their inner realm of desires, fantasies, dreams and aspirations.

On the appropriate personnel for a sociodrama:

Three to five of the participants can be players, while the other 10 to 12 participants have an important role as audience members.


The method--each person improvises inside a given character:

They should not plan exactly what they will say. It is better to have the players act out more or less spontaneously what comes to mind.

Remind the players that they will not be acting as themselves – they should present a normal or real scene from their community. You may encourage players to act as a person of a different age or gender if they feel comfortable doing this, as it can be more entertaining for the audience.

Suggest the following to the players: speak in a loud voice; utilize body expression, movement, and gestures; try not to have more than one person speak at the same time

Instruct players to discuss where the scene will take place, what characters will be in the
drama, and what they will do.

Tell the players that they should act out normal life (what people say and do), the whole setting, not just the exact topic they are given.

Tell the players that they should perform a series of scenes.

Suggest that they make the scenes “interesting” by acting out what typically happens in the particular setting, regardless of whether it concerns the selected topic.

Remind the players that they should act out what actually happens in their community –not what they think is proper or the “correct” answers. Remind them again that they are not playing themselves, but are showing what is generally done.

1) A 14 year old girl is being teased by her friends about how they have sex. They try to convince her that she should try it, saying that she is silly and young because she has not tried and they will not chat as much with her if she does not try. The girl tries to resist the pressure. (3-5 girls)

2) A 15 year old boy who has never had sex decides to wait for marriage, or until he is much older. He lives in the boys’ quarters with his friends and older brothers. His friends try to convince him to change his mind and get a girlfriend. (3 – 5 boys)

3) A 12 year old girlfriend tries to persuade her boyfriend that they need to have sex as part of their relationship. Later, his friend can join the discussion (1 girl, 2 boy(s))

4) A 15 year old boyfriend tries to convince his girlfriend to have sex. (2 people)

I don't have much of a thesis here, just some questions--we are watching some parts of the RPG community move very much in this direction--whole games are being designed around "healing" the players. Obviously people are doing this because they want to and see value in it, but I haven't yet seen anyone articulate what the value of doing these kinds of games in an RPG space rather than in a medical space or theatrical one is for them personally. And I haven't seen much development of ideas around which spaces are better for what purposes or how a group goes about deciding what proportion of therapy to what proportion of entertainment a game might contain (and does "catharsis" land someone in the middle?).

I suggest the whole subject is worth further investigation. 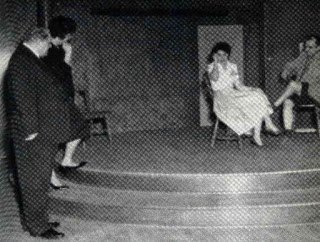 Very interesting indeed... Can you give some examples of RPGs that pursue the concept of "healing" players?

It's less RPGs than it is specific ways of playing RPGs.

Ima sure some of you have seen this "Escaping Prison with Dungeons & Dragons" going around...

Larp scholars have talked about Moreno for many years. Here's a recent iteration of a talk on the history of larp by Norwegian larp designer and researcher Eirik Fatland that references Psychodrama extensively: https://www.youtube.com/watch?v=KNY_qT_1xpQ

Another aspect of RP worth thinking about is its use as a training tool. For example, mediation training incorporates a mock mediation with the trainee mediator mediating a dispute between 2 role players (usually other trainees). From personal experience, such RP can be nearly as harrowing as the real thing.

Whenever I hear about scientific research into the possible therapeutic applications of psychoactive drugs, they are always very careful about emphasising that the environment needs to be controlled in order to reduce the risk of harmful or damaging outcomes.

Obviously games can be therapeutic, and that's fine; and one can decide to use a game to explore traumatic ideas in a safe space, that's also fine. But when game designers with no psychological training decide to intentionally create games as therapy, I start getting wary. The risk of damaging or harmful outcomes is too high to allow a dilettante to muddle around. Not to say that good results would be impossible, just that it's irresponsible to take risks with people's well-being without having at least some kind of understanding of what those risks are.

I've both played and run games and am currently training to be a psychodrama therapist, so I think I've got both perspectives.
It seems to me that this is a question of goals, obviously both RPGs and psychodrama contain role-taking in their structure, but the aim of RPGs is primarily to have fun (hence role-playing GAME), with emotional catharsis as a way to escape from reality and create playful conflict, whereas psychodrama focuses on personal issues, often working through painful scenes and emotions.

But there are people who will openly discuss focusing on personal issues, and often working through painful scenes and emotions in RPGs and that is why I wrote a blog post about it.

@Zak
Right, I get that, and I'm glad you did, because psychodrama seems to be rarely mentioned (or maybe less frequently than it deserves).
I think @Charlie also makes a good point, adequate psychological care requires training and a method.