Those Who Are Obscene

DEMONS OF THE NINTH ORDER—Those Who Are Obscene 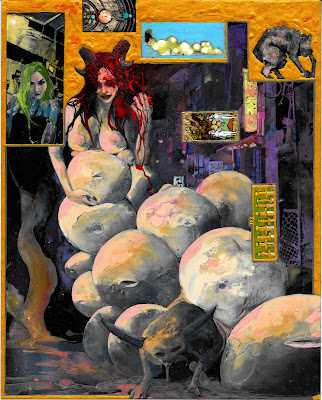 These demons, also called Gamaliel, Obscene Ones, and divided into the succubus (female) and the incubus (male) are capable of assuming an impossibly attractive appearance and seek thereby to tempt humans, and thereby spawn half-demonic children tainted by dishonest congress.

In order to attract a succubus or incubus, a human must be willing and the prospect of intercourse must involve the mortal in a lie or broken promise. As the act progresses the creature becomes ever more monstrous. The true and final form of a succubus is a horned woman 15’ tall, its many bellies awrithe with polluted offspring, the true form of the incubus is a curled and clutching abomination with skin like an eel.

Demonic: Demons don’t need to breathe or digest, don’t age, and are immune to poison, etc. and cannot be mentally controlled with psionic abilities. Animals will avoid the demon in any form. Technological contrivances like firearms and explosives can hurt but never kill these demons—they must be manually decapitated, have their hearts cut out, or be dealt with by magic.

Shapeshift: These demons can appear to be ordinary humans, though always with a missing finger.

Emerge from the Darkness: If unwitnessed, Gamaliel may step into any shadow in the city where they are summoned and reappear through any other in the same city.

Corrupt Eye: A single look from one of these demons will cause a pregnant woman to give birth to nine children in total over nine years. Each will despise the others. If she has more than nine already, the others will die—if she has nine precisely, she will serve the demon for nine years.

Those Who Are Obscene are always missing a finger in any form.
-
-
-

I just sort of picture one of these critters setting up a casting call for women with nine children. Tell 'em it's a "real people" ad campaign for Dove or Gerber or something. Bonus points for the agency rep lying for nookie.

I really like the phrase "the planet that is not a planet". Such a great poetic way of describing the status of that particular celestial object.