Things To Do With Salad and Styrofoam

So this is the Sandman: 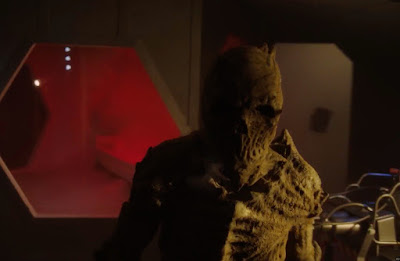 ...the Sandman is on set, starring in a Sci Fi Channel original movie. Somewhere in Hollywood.

The Sandman's cell phone has rung.

Now, Sandman's wearing a lot of make-up and a mask which make it pretty hard to put a phone to your ear. So it's on speaker.

"Can Poppy borrow the Lady Nine Bones Necklace from Arafel?"

"Ok-good luck in the Maze!"

Sandman looks around to see the cast and crew staring, cocking its collective head. 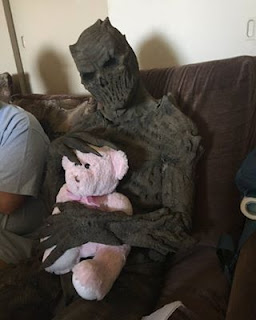 So, a few weeks ago the party traveled to Hot Springs Island.

They hexcrawled their way across many hazards... 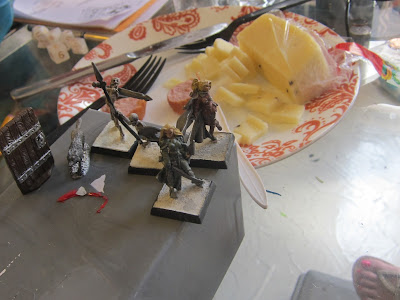 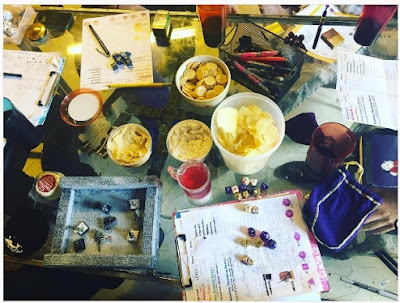 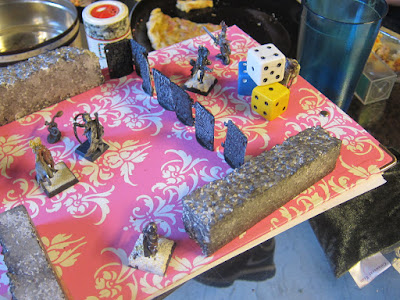 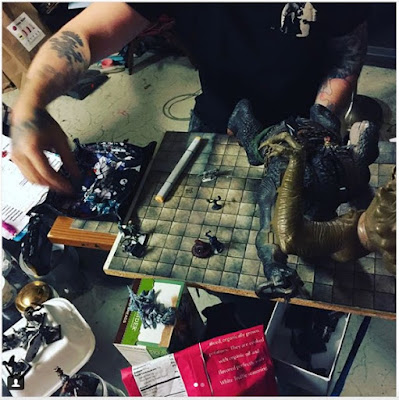 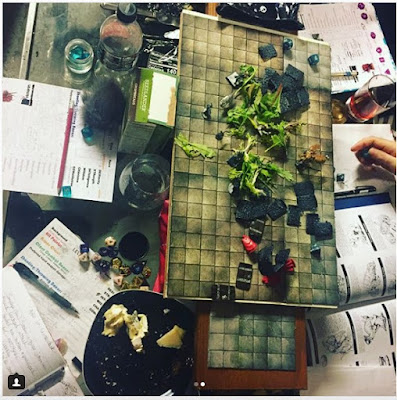 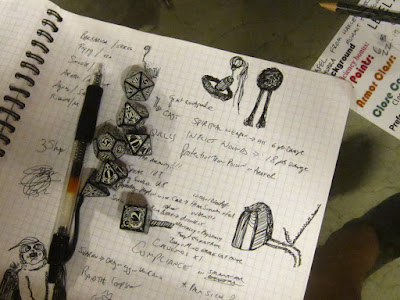 ...and eventually stumbled on the remnants of an elven army cowering on a mountaintop a few miles from the great volcano. 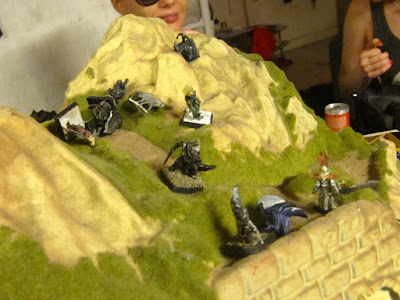 The proud fair folk were suspicious of a party of mostly half-elves and--possibly worse--tieflings--but they camped together for the night.

They were then--of course--attacked by lizardmen. One of them hurled a globe of mutation at one of the basically totally incompetent elven princes (a second eye and then head began to emerge from the side of his neck) but the party eventually fought them off. 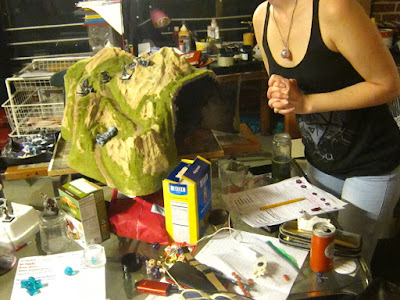 In the morning, the party asked the elves they'd just saved for help finding the volcano and the dragon egg inside, but, terrified, they politely begged off and hiked out into the jungle.

Agnes Steelheart burned with contempt at their cowardice "Good luck with your extra face, loser!"
-
-
-
Also, somewhere along the line the party picked up two things:

1. Smudge the elf thief who sucks at rolling dice

2. 11 doses of a potion form Hot Springs Island that makes "the body and mind forget the last hour"

Also the cleric was drinking a lot of wine.

This lead to the following situation no less than three times:

Agnes Steelheart would get really pissed at how useless Smudge was in a fight.

Agnes would get knocked out and be almost dead (and, in one case, actually dead).

So I got in the elevator and there were three people and one of them had a big box with styrofoam sticking out.

"Hey," (lightbulb) "is that box all packing material?"

"Uh...." they thought I was going to yell at them about the environment "yeah?"

So then I threw it together with some stuff I already had and proceeded to build a Temple of Mariyah on the kitchen table... 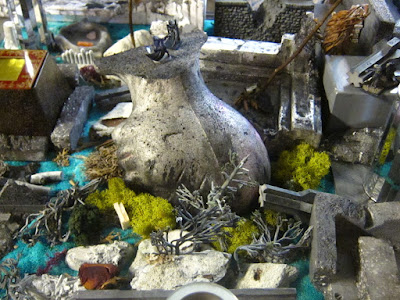 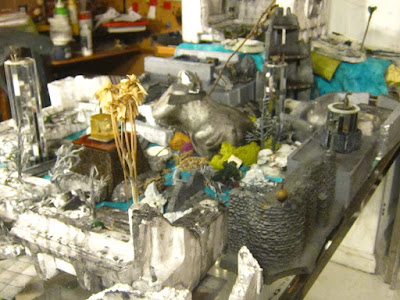 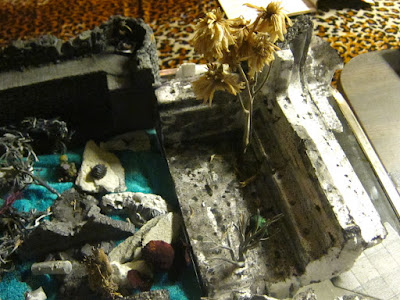 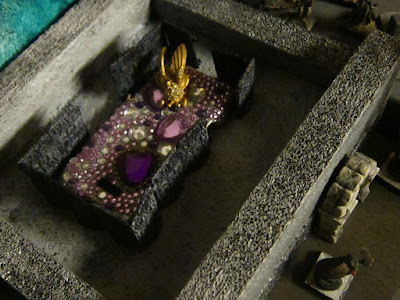 I got pretty into it. I made a whole key of the secrets hidden under all the rocks and crannies.

I was fucking prepared... 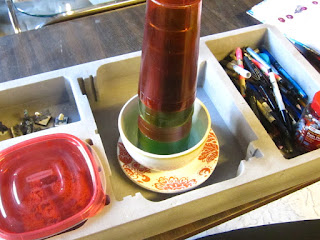 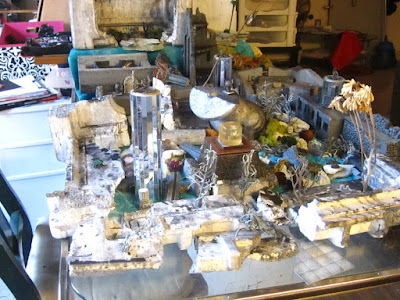 ...but you know how players are, spending all that work on something pretty much guarantees they'll be like "This looks scary, let's go fart in a pumpkin". 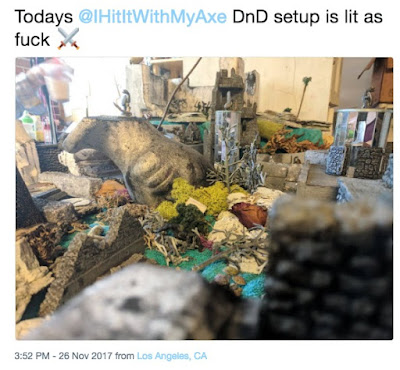 (You can hear me yelling at them to shut up and enjoy it on this clip here). 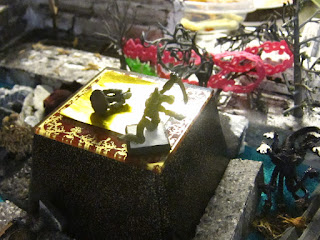 Even better, though, there was a massive, brutal fight with a near tpk. The serpentmen had a hydra that almost bit everyone's head off until Arafel used the 9 Bones Necklace to get possessed by the Blue Medusa.

So we solved the Who Would Win In A Fight Between Medusa and Hydra question the Greeks somehow never got around to answering.

Then Medusa will then be like "Where am I?" because she wasn't the one who decided to possess this tiefling and then wander in a random direction (roll 40k scatter dice) and...oh dear...look right at one of those reflective pillars. 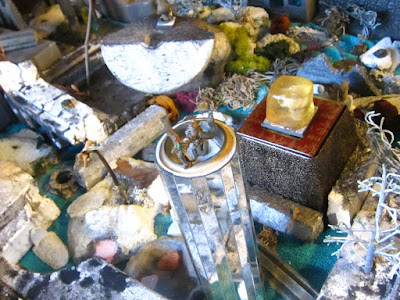 Notch off one more dose of Rewind Potion.

Anyway it was a fun game. The cleric of Mariyah kept staring dazzled at the temple

what is the terrain mod for a cheese platter?

It’s difficult terrain plus you have to save versus spells or you lose a turn to eat the cheese.