Here's how the party doubled their xp:

So in the Maze of the Blue Medusa the party got in a fight with the obnoxious and imprisoned Milo DeFretwell.

DeFretwell then yelled a lot triggering a random encounter with some Nilbogs I think.

The Nilbogs were clever and dragged off a party member through a secret door.

It was also the secret door between the 2 sculptures in the maze where, if you walk between them, your eyes turn into gems.

So....a lot of chaos and blind-firing later they extricate themselves.

Now, in other news they'd gone to the Goblin Market (chaos ensued, a goblin merchant stole all of someone's stuff then shrunk down and hid in a pumpkin, which pumpkin the PCs are still carrying around. The girls' last idea was to fart into it until he comes out but its best not to dwell on your friends' shortcomings)

...but the upshot is someone got ahold of the curse removing nut from the market.

So the gem-eye thing was removed with the nut and the gem-eye curse was in the nut, ready to be transferred elsewhere.

The Maze, as those of you of wealth and taste such that you own a copy of Maze of the Blue Medusa may know, has an exit leading to the island of Eliator, where the inhabitants believe the Maze to be their underworld, and believe anyone coming out of it is a god.

The "gods"/PCs (whose previous relations with the Eliatorans have been...complex) arrive to find the villagers gone and the village burnt as bad breakfast.

A sole remaining Elatoran says that evil men came and stole them all taking them....to that distant island on the horizon!

The players there that week go "Sure, let's hit this side quest."

This turns out to be Hot Springs Island.

If you don't know the gimmick, it's a system-neutral hexcrawl made to be super-immediately useful laid out by people who have been paying attention to the OSR RPG-design best practices and it also comes with a separate book--a "Field Guide" which is a partially-accurate guide to the hazards of the island written in-universe style which you can give to your group's Hermione and they'll love it and spew facts at everyone.
(This worked exactly right. Ela Darling, Queen of All Porn Hermiones immediately took the Field Guide "Is it ok if I buy my own so I can read it?")

Anyway the important part here is soon there was a 20-foot-long 8-eyed centipede with 75 hp (I made it proportional to the cat toy I was using as a miniature) trying to pry open a giant crustacean on the beach and a cleric with a 4 Dex trying to sneak past it.

Shockingly a fight broke out.

It was pretty desperate, until the sorceress had an idea: pack a bunch of dead lobster around the cursed nut and shove it in the centipede's mouth.

This acorn bisque worked out. The party made quick work of the blind beast and scooped 8 eye-gems, each the size of a cantaloupe, out of its stupid face. 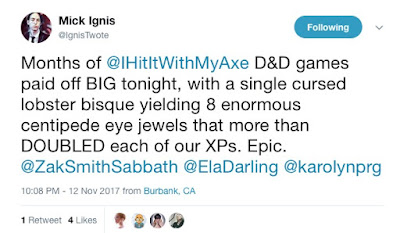 When the day is saved by deez nuts!

Do your players have a way of getting in and out of the Maze?
I'm asking because I am thinking of placing the painting in my game but I don't want it to be a one way trip for low level characters.

My players came in at level 1--

-up the stairs to Eliator

I am insanely jealous I was not there for this. (p.s. Morgana: Good one!)

Thanks, I always thought the painting was more of a one way deal.

Adorable kitten! What is it's name?