This is for a project on The Planes with art by me, Scrap Princess and a writer who is neither of us but is a secret for now.

The Planes in this version, courtesy of the art-brief I was given, are:

The Elemental Plane of Air: Inside the hollow bones of a giant bird: dead and petrified. Floating. The bird is being torn apart and disassembled by an extremely slow moving elemental maelstrom. It will take eons.

The Elemental Plane of Earth: Walking the halls of a house that is being perpetually reconstructed. The Winchester Mystery House meets Frank Gehry's home. The ghost elementals of long-dead mineral miners.

The Elemental Plane of Fire: An asbestos-shrouded research facility that harnesses the perpetual energy of Fire. They are trying to turn the event of fire into a tangible thing. Ever-burning Pripyat trapped in the moment of meltdown. Manned by jinns of science.

The Elemental Plane of Water: A calm, highly-structured village spread across a misty island chain. The aesthetic of Mad Max in the waterways of a crumbling Vienna where scrap cars are boats. The elemental people here follow a strict, unyielding schedule.

The Quantum Plane of Absence: Everything that didn't make it into the book, provided without context. Surreal and meaningless (within the lack of context). The Cremaster Cycle meets Italo Calvino's If on a winter's night a traveler. [replaces the Positive Energy plane]

The Quantum Plane of Presence: All things on all other planes, except forced into hazy, indeterminate meanings by new context. Slaves in the employ of a well-defined god who promises them meaning but never delivers. Eraserhead meets On a Silver Globe. [replaces the Negative Energy plane]

The Meso-Elemental Plane of Asepsis: Beneath an ultraviolet sun, lead-shielded outbuildings ring a bubbled field. It looks like an armored poppy farm: a Tank Girl biodome. Nothing is native to this plane. Short-lived outsiders, toiling in a hazy atmosphere of breathable, purple-white iodine harvest one dose of the Cure-For-All-Ills every thousand years. It will only grow here. They produce and age other cures like wine. Powerful men contract diseases just to experience the wonder of their cures.

The Meso-Elemental Plane of Decadence: A living flesh-city run through with veins of neon. It’s the excesses of the 80s and New Wave fashion filtered through the lens of Cronenberg or Yuzna's Society. Primitive, biological cyberpunk. Neon elementals who hypnotize with dance.

The Meso-Elemental Plane of Extinction: A crooked monastery high upon a mountain, visible only from a certain angle. Perfectly ringed by a spiral of clouds. At the base of the mountain: a party and temptation to stay behind. Visually influenced by Jodorowsky’s Holy Mountain and Daumal’s Mount Analogue.

The Meso-Elemental Plane of Rot: Inside a bulbous dome insulted by pus. Rot-technicians and disease elementals. They catalog all the sickness in the metaverse. The CDC, except the inmates are running the asylum. A syringe smokestack injects plague clouds into the Material planes.

(1) A garbage dump plane, all broken and lost things end up here.

(2) The living plane of Neth, except it's dead and in the process of merging with the Plane of Rot.

(3) A luxurious, interdimensional inn that connects all inns everywhere.

(4) A prison plane where languages are physical beings and kept imprisoned. If killed, a language ceases to exist everywhere.

(5) A generically-evil castle surrounded by a pile of fallen Paladins. Whenever a Paladin over-zealously swears to "thwart evil," a copy of them ends up here where they fruitlessly assault the castle and die atop the mound.

(6) A lush jungle plane that is home to an elusive, primitive tribe.

(9) An infinite garden of flowers on a finite island.

(10) A throwback to the Lady of Pain: an endless, abandoned maze plane 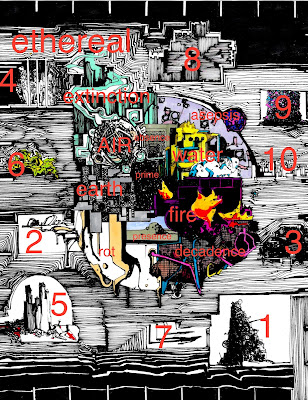 I know very little about this project other than what's above, but Our Mystery Benefactor pays a fair wage, is patient and eloquent, and dwells in a vast manor where the light from high windows swims restlessly across the tiles in a criss-cross of silent halls.

I'd much rather toy around with something this strange than the uber-generica of standard TSR-era planescape.

This sort of experimental writing is exactly what I love most about the OSR. It is a sort of literature you just don't see in anything else.

I also think the original idea of 'The Planes' is what sets Dungeons and Dragons apart from the grumbling general population of intellectual properties that proliferate contemporary fantasy.

It would be great if this project gains sufficient steam to mature into a healthy finished product. The more iterations of the planes we have, the better. There should be a dozen manuals of the planes, from a nuanced studied historic approach to gonzo balls to the wall conceptual spitballing. Keep adding well made tools to the box.

I wonder if this is Christopher Mennell's project finally getting started.

If you don't mind my curiosity, what is your reading schedule, alongside all your writing, drawing, playing, and testing?

I keep seeing all these references to literary works and/or other large works of writing (whenever you reference a historical event or some scientific concept, I assume that means more reading).

I'm not sure how to structure that sort of breadth of knowledge into my current life. I dunno if it's just stuff you've accumulated with time, if it's a time management trick, or if it's just a commitment of some sort to learn voraciously and continuously.

Just looking for any comments on that, really.

i read when I travel, or when I'm too tired or sick to do anything else, or when I've started reading something and decide I can't stop because it's too good.

That said, this list of planes was written by the Mysterious Benefactor, so not all the references are mine.

I'm curious if you will be adopting this for your Vornheim campaign and where it fits into the concept of the megadungeon cubeworld?

There's an art brief that only a surrealist could get any use out of.

So, how's Patrick's part coming along?

I know you cannot tell us anything about this mysterious benefactor, so this is pure conjecture...but I do wonder if it might be Wizards of the Coast; hiring you and Scrap Princess to resurrect Planescape. Y'alls art styles would definitely be a nice contemporary answer to the work of DiTerlizzi and Ruppel from the 90s TSR stuff.