The Anti-Design of the OSR 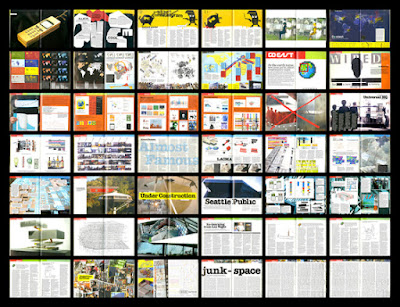 Quotes from avante-garde architect and architectural theorist Rem Koohaas with one or two words replaced rewritten to be about elfgames:

1. If there is a method in the OSR, it is a method of systematic idealization -- a systematic overestimation of what exists, a bombardment of speculation that invests even the most mediocre aspects with retroactive conceptual and ideological charge. To each bastard, a genealogical tree...

2. If there is a plot, in modern game design, it is the eternal one – simple Darwinian imperative maybe – of each generation trying to incapacitate the next under the guise of educational process. Here it is very noticeable and very expensive.

3. Flexibility is not the exhaustive anticipation of all possible changes. Most changes are unpredictable. Gygax could never imagine the present use of the alignment chart. Flexibility is the creation of margin--excess capacity that enables different and even opposite interpretations and uses.

4. GMs knows what modern design will never learn: that modular coordination is at most postponed failure, a temporary rollback of the frontiers of chaos.

5. Mainstream game companies need OSR consultants to demonstrate their "modernity" but are finally unwilling to assume their radicalism, conceiving then aborting successive "could have beens" to prove first their adventurousness, then their sobriety.

6. "Incoherence seems to me preferable to a distorting order"
-Jeff Rients, On Ron Edwards and GNS

7. Evil Hat is not a movement; it is a new form of professionalism, of game education, not one that creates knowledge or culture, but a technical training that creates a new unquestioning, a new efficacy in applying new, streamlined dogma.

8. The construction of situations begins on the ruins of the modern module. It is easy to see the extent to which the very principle of the module--noninvention--is linked to the alienation of the old school.

9. Finally, we insist that at no time have we presumed to have produced a designed hexmap. We have confined ourselves to devising a framework capable of absorbing an endless series of further meanings, extensions, or intentions, without entailing compromises, redundancies or contradictions. Our strategy is to confer on the simple the dimension of adventure.

10. A complex like Rappan Athuk consists exclusively of mediocre, if not ugly, if not completely failed and flawed rooms, but has, nevertheless, a certain grandeur, and when seen in a certain way on certain days, appears absolutely positively beautiful. The only (most drastic) explanation is that almost all dungeons beyond a certain scale possess a kind of beauty in their sheer overwhelming presence.

11. "Most of the visual maps that are being made in the world are slaves to text."
-Luka Rejec

12. If there is to be a 'new rpg design' it will not be based on the twin fantasies of order and omnipotence; it will be the staging of uncertainty; it will no longer be concerned with the arrangement of more or less permanent objects but with the irrigation of territories with potential; it will no longer aim for stable configurations but for the creation of enabling fields that accommodate processes that refuse to be crystallized into definitive form; it will no longer be about meticulous definition, the imposition of limits, but about expanding notions, denying boundaries, not about separating and identifying entities, but about discovering unnameable hybrids; it will no longer be obsessed with the story but with the manipulation of infra-structure for endless intensifications and diversifications, shortcuts and redistributions - the reinvention of psychological space.

That is quite clever.

This is like reading a college thesis all over again. This is fucking roleplaying, not biomedical theory!

Can you do a blog post about Evil Hat and why you think FATE is bad for RPGs? It would be enlightening to see your full perspective on it.

Nah I don't want to bring attention to it by complaining or invite that INCREDIBLY toxic community to talk about my post.

Here is Fred's rap sheet though: