The Maze Claims Its First Victims (And Nominations)

Maze of the Blue Medusa has claimed its first local victim--dark elf thief Rosalyn, who laid eyes on the beautiful woman hanging in the vine room and was set upon by flesh-eating orchidmen.

Sendrelle the witch had just passed through the door that charms you and was smitten with Rosalyn, so decided to burn....basically the entire wing of the dungeon down in retaliation. Also broke her foot.

Emergency back-up PC I rolled for the dead Rosalyn was a Chameleon Woman fighter (spy background) which Hannah named Jenevere and decided to hold on to after the session ended. Which means I've got to make a new one...

Other highlights include Hygeia the witch playing her first game of D&D ever and realizing you could blind the snake mosaic by throwing ink in its eyes, players weaponizing a randomly found bag of flour twice (once to blind the inky eyes that hold people, once as firebomb) plus a bunch of had-to-be-there shit which lead to the Cleric of Mariah sounding like Tony Soprano on account of being really bad at remembering who's dead and who's alive and why.

On account of people being available odd days, 3 almost not-overlapping groups of players have gone in to the Maze. "You were supposed to be on guard while your friend stole a painting..." Pictures below show only the bits explored so far. 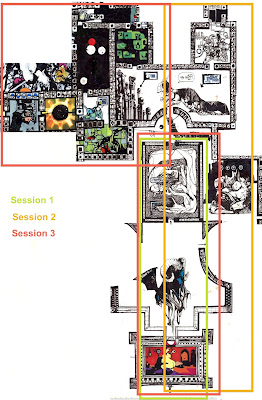 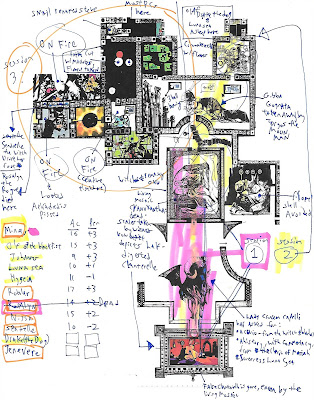 As is the way of such things, the harassment has started immediately, with Alex Norris / Lemon Curdistan / Lemon-Lime from Ettin's Something Awful group piling on first and storygame veterans Robert Bohl and William Nichols joining quickly after. Anna Kreider / Wundergeek has now joined in, maybe to distract from her attacks on lgbt people.

I wonder if people will walk out again if we win--and I wonder if they will do us all a favor and keep walking this time.

I was just getting ready to type you asking if I could use your awesome Wavecrawl kit to make a great Sword & Sorcery supplement for random sea encounters. You know, build off your work, put in enough effort to call it mine and share it. Give credit where credit where credit is due. And I see some f#%^wit takes the time to call you out and try and smear you and your friends top quality work. I don't get it. I really don't. What I do get is the nominations. Those are not gifts, they are not party favors. Rightly deserved for hard work of all involved.

Congrats on the ennie nods! Surprised it didn't grab one for production values too, but cest la vie. Given your incumbancy, any plans to accept some wins in person?

Congratulations on the nominations, Zak.

Excellent! And Congrats.
I picked this up on PDF a bit ago and trying find a place in my campaign for it.
I think it might end up being it's own thing.

Again congrats on the nomination. I'll be at the awards show as well so we'll see if there is any drama this year.

If there is, the thing to do is point and laugh.

I heard you got a nom too, Tim?

I got my book in the mail last weekend and have been reading the pdf for a week now. Your layout designs are great. I think they'll really cut down on flipping back and forth to find charts. It feels like a lot of thought went into how to actually present the information.

Content-wise it's just berserk. So excited to run this thing. Thanks!

Seeing these ppl cry only reason i follow awards

Bought Maze sight unseen based on the amazing work of RPL! So glad I did, my wife and I can't wait to run it. Ignore the haters, its amazing they exist

Yeah this is a pretty deluxe dungeon crawl, what with the hardback and bookmark and full color. Your books keep getting bigger, and richer, and better. Congratulations!

I bought it. Drank the Kool Aid. Who the fuck is Robert Bohl?

Congrats on the nom!

Well done on your nominations. The best you can say of your quoted critic is the spelling is fine and he knows when to use an exclamation mark. The substance of his position is, however, a little light.