Long time readers will probably be aware that me and the D&Dw/Porn Stars Girls have been through a lot of harassment at the hands of prominent members of the indie RPG community, including Cam Banks, author of Marvel Heroic RPG, Fred Hicks of FATE and Shannon Appelcline and Christopher Allen, who run RPGnet.

What's been frustrating is how many of their friends, coworkers and business partners gleefully joined in these attacks (and still do). And how the prominent folks in that scene never call each other out for bad behavior.

Well, that's changed. Somebody prominent, who people listen to in the indie/postForge/StoryGamer clique has finally admitted they're fucking up. 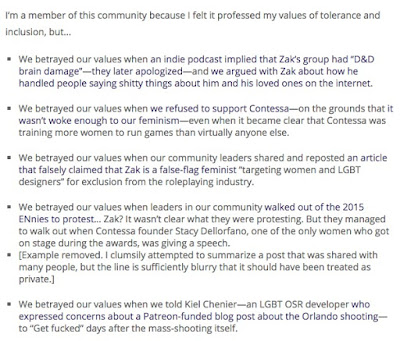 You'll notice Mark was forced to anonymize the names for fear of attacks from his own people, but the walkout on Stacy was Cam Banks and Adam Jury (of Eclipse Phase) and Anna Kreider / Wundergeek was the one who fucked with LGBT folk after Orlando.

I was about to compare this to prominent Republicans finally admitting Trump is an ass, but that's not fair--there's nothing inherently fucked-up about the Drama Club's approach to games, it's just their approach to other humans that sucks.

As you might expect he's experiencing a lot of pushback and attacks because of this, which you can see here. (EDIT:: Holy fuck just realized one of the people harassing us works at Paizo. What the hell?)

What Mark doesn't say is where all this bad faith behavior comes from--but it's pretty obviously on display in that thread I just linked--lots of accusations and dogpiling, no links to evidence and  nobody even asking for links or evidence--and no acknowledgment of any of the D&Dw/Porn Stars women as even existing or having experienced harassment. The underlying problem here is the Drama Club's culture, which is, unlike the DIY D&D scene, avoids confronting abusers consistently-- and can be summarized as: 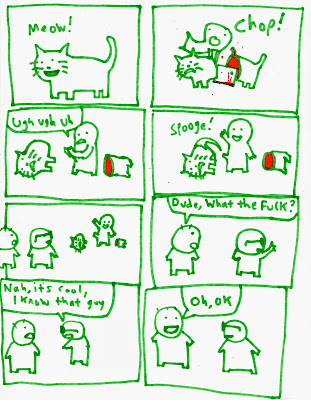 And a serious lack of: 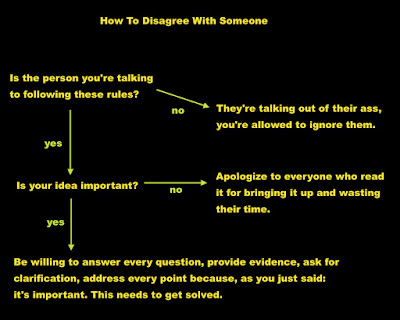 Individuals feuding is a necessary evil; gaming communities feuding is a waste of time and energy. My open letter post to both the OSR and story gamers will be posted on my blog later today.

Individuals feuding is a necessary evil; gaming communities feuding is a waste of time and energy. My open letter post to both the OSR and story gamers will be posted on my blog later today.

In- grouping is an extremely powerful thing, and can't exist without out- grouping. Feels good to be reassured that you're right when others are wrong. What's insidious is that people aren't often aware that they're doing it, and it's a natural human tendency. It's also poisonous to principled disagreement and nuance.

Ranges from nationalism to extremely niche concerns. Fascinating when looked at from the outside; there's a website devoted almost entirely to slagging off different martial arts that I read for some time, because I found the nature of the discourse to be so bizarre. Sometimes the stakes are very high, as you've experienced a lot. In following the "community" for some time, I came to the conclusion that "Zak" had become a symbol and some people would only pay attention to you in order to confirm their perceptions. At some point they realized that fighting different approaches to RPGs was petty, so they had to raise the stakes. I'm generalizing out of necessity of course.

The portrayal of your players as thralls lacking agency in the name of feminism was certainly a virtuosic example of Orwellian doublethink. Seeing a mod post "I win!" after someone they didn't like getting banned really drove it all home for me. On seeing someone post "I disagree with Zak on many things but this is a great product." I was surprised. A pity that it was surprising.

I have literally NEVER run B/X.

Feel free to go over there an fact-check them, BTW, I have told MArk I promised not to comment so I can't call them on their BS.

I just decided to rewrite this comment to excise some bad faith snark. Goes to show how easy it is to fall into. Edit:

"On a more pedestrian note, have you written about running B/X, or are they mistaken about that?"

Then again, making unfounded statements without first investing 15s in a Google search is um...

I have literally NEVER run B/X.

Feel free to go over there an fact-check them, BTW, I have told Mark I promised not to comment so I can't call them on their BS.

-
I think there's barely any moral difference between lying and not doing the research (ie being mistaken b/c lazy) when:

Part of me was like, "I don't think he's written about running any TSR editions. You just making up stuff?"

But then I was like, "If this is true, I can't wait to read what he's written about B/X!"

Yup. Don't want the person to interfere with the symbol.

When did your tenure as leader of the majority of TRPG gamers start? Did you actually want the job, or realize that you had it? I observed that it's best to assume peoples' statements only reflect their own views until shown otherwise. Seems pretty obvious.

While I am the boss of no-one, it is important for people whose ideas tend to get repeated and echoed and acted on by other people to recognize that.

I am not the boss of DIY D&D, but if I, for example, put someone's blog on my blog roll it will be read more than if I didn't.

If I call out someone for acting like an ass, they will face more calls for accountability than if most other RPG bloggers do because I have a larger audience.

So, for example, I know it would be bad to host false information here.

Of course. I'm not sure if I was clear in my intent with that comment. I wasn't trying to minimize you. I was trying to get at something that happens a lot and I noticed on that thread, which is the attribution to all members of a (made up or poorly defined) group the views of one of them. It's not fair to anyone, and it invites bad faith arguments.

And thanks for all the great content. Long time lurker, first time... etc.

That thread was like a macrocosm of the internet side of the anarchist milieu, made so much worse for including so many more people.

There's some kind of dynamic involved that is extremely common across many different interests. My theory is that the social context that internet text communication lacks plays a significant role. Observing from the outside can provide the same kind of buzz that reality TV does. Maybe this is the buzz that trolls are chasing. Not a very noble motivation. And I say this as someone who has indulged in some bystander schadenfreude. On the other hand, one also wants to jump in, referee, and point out painfully obvious cases of failed communication.

I wonder how many anthropology PHD candidates have taken a shot at this one.

I made a small, careful effort to dispel some myths in that thread. Must say it's pretty disheartening to see huge misrepresentations. I mean, thinking Mr. Pundit and Zak are the same person, or that they agree on all relevant matters is pretty egregious. I wonder if they even want to know how wrong they are about stuff like this.

Zak, I can't imagine your frustration at constantly being thrown in with that guy.

Och. Coffee's kicking in and I feel like I need to make one more observation. I've read my fair share of implicit and explicit cases of "Almost everyone who plays rpg lack the self awareness to realize that they aren't REALLY enjoying it. They just think they are." I suggest to people that believe this to be absolutely the case that they keep their mouth shut about it. I can't shake the idea that in at least some cases the question shouldn't be "How can we attract mainstream players to try this cool thing?" but "Do we actually want that outcome?"

That said, Satanis, you're not even speaking the same language in your bridge building post, despite your intentions.