Clue The Movie vs Skipping Rocks

"State tracking" is keeping track of information specific to your game piece that can change--(hit points, demeanor, equipment held).

The more a fiction tracks your state the more RPG it is. That is, the great discovery of RPGs was tracking every single thing about your state (and the world's). It is the main thing. Chess is most an RPG when your pawn becomes a queen--a little story moment has happened.

Games have choices or at least different possible outcomes, pure stories don't. Stories have a sequence of events designed to be interesting in themselves regardless of your investment in a given outcome, games don't. 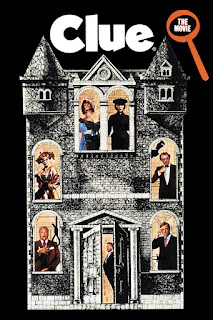 A game is differentiated from the least-gamey interactive fiction by the possibility of undesirable choices. If all choices make the story interesting it's less of a game, it's just walking up to the shelf and deciding what to read. If I read Batman and Robin #1 and then decide whether to next read the simultaneously-released but in-continuity Robin #1 or else Batman #1, I am not playing a game--I am simply planning my evening. But it's a thin line--for example, the 1980s Clue movie had three endings. You could see any one of them in the theaters and they were all supposed to be entertaining, of course (that is, whatever you were supposed to be getting out of the movie up 'til that point--post-Wodehouse comedy, Tim Curry, each ending was supposed to present more of that--more post-Wodehouse, more Curry). There was not much of a fail state, but there was a little bit of one (one ending might be subjectively worse than another). It was about as not-gamey as a thing could be while still being almost a game.

Compare Clue the movie to skipping rocks: skipping rocks has allllllmost no story ("the rock skipped 2 times", "12 times", "zero times", the possibilities are endless but very limited) but is definitely a game. The fail state is: the rock sinks rather than skipping. It is very very game and only a wee bit story.

Games are characterized by the possibility of frustration--frustration in a novel is nearly always a bad sign. In a game, it's a necessary danger that you attempt to overcome.

It's important to note that even in the most hippie style storygames you can fail and fail all the time, but the failure isn't necessarily "I died and had to stop playing that character and restart with a new status quo" it's "I got the story stick passed to me and didn't do anything interesting with it".  That is the exciting possibility of failure--one akin to live performance. It is the very possibility of not doing it right and it not being fun for a moment that makes it gamey.

A game is an experience designed to subject the player to fun via the vertigo of being suspended over the abyss of nonfun. As a roller coaster makes you feel alive by reminding you of the possibility of death. Oh no, what if I die? The nonfun will consume me. I am, therefore, highly motivated to keep on. I am gripped then by a great tension.

Everyone has a threshold for this tension--everyone has a point at which the stakes are so high it's no fun anymore. Like if it's like if you lose this hopscotch match they'll drop trucks on your house and pets and loved ones then you might not have fun even at the funnest game. The point at which the stakes feel so high it goes beyond the level needed to emotionally invest the player and spills over to "no fun because it's so scary" is a subjective emotional preference and, as such, both nothing to scream about and something inevitably screamed about.

Now here's a word from our sponsor:

I like this. It helps to clarify an issue my players and I have. For them, the specter of PC death is so not fun that it interferes with their ability to fully immerse in the game. Some respond by playing too cautiously while others throw themselves into repeated suicidal attacks after they lose a character or two. The trick, I guess, is to find a lovely middle ground where the comfort level of both the DM and PCs overlap.

I hope Mandy is feeling better. I read about the main line feeding via the nutrition gel and it sounds like a long, rather uncomfortable experience. I hope she is on the mend soon and free of the marshmallow-colored goo.

Say, in a game group, you have some players that like the tension of potential character death, and a couple who really do not. They're all good people and players and fun, but have that important difference in approach.

Might you just give all the players the option to have their character be unkillable? Like they can be captured or whatever, but let the players dictate the risks to suit them? Like say "ok my guy can't be killed, mutated, or have his hair damaged" or whatever, because, for that player, all of those things are too horrible?

I suppose, were you to do that, you would assume your players have a solid understanding of their line, which might not be true.

Also, like computer games and cheating, you think "oh I can change this and it will be more fun" but then it actually undermines the joy of the game but you don't realise until it's too late and you've played for months and now everything is ruined because you chose to cheat/be-unkillable and it's boring and you got all this treasure and you can't go back etc...

But still - Might that initial idea (allowing players to set their own risk-threshold) be valuable, do you think?

Keith Baker's new game Phoenix is built all around that.

Though, in practice, many games have lots of choices which allow people to negotiate their risk level.

Okay, I couldn't resist and I wrote an RPG poem about stone skipping this morning:

Thanks Zak. That is one of the better articulated explanations of the story <---> game continuum.