Smart Campaign with Intrigue And Relationships And Also Lava Babies

When last we left our heroines, they had just defeated a massive Decimator in front of the Pale King.

Impressed, the Pale King offered the group a round and kingly sum if they could hold off a force of Nephilidian vampires approaching that bridge up there until he had time to rally reinforcements.

The ladies agreed, contacted the approaching Nephilidians, told them that if they'd hold off their assault for one day and pay them off, the girls would sabotage the bridge for them so it'd crumble after the first thrust. One persuasion roll and...hey look at that.

(An interesting effect of converting from my 3e/1e hybrid to something more like 5e is people are better at stuff and worse at stuff than they used to be. Connie's thief is now very charming.)

Then everybody took a cigarette break and then fuck yeah our Red & Pleasant Lands came! 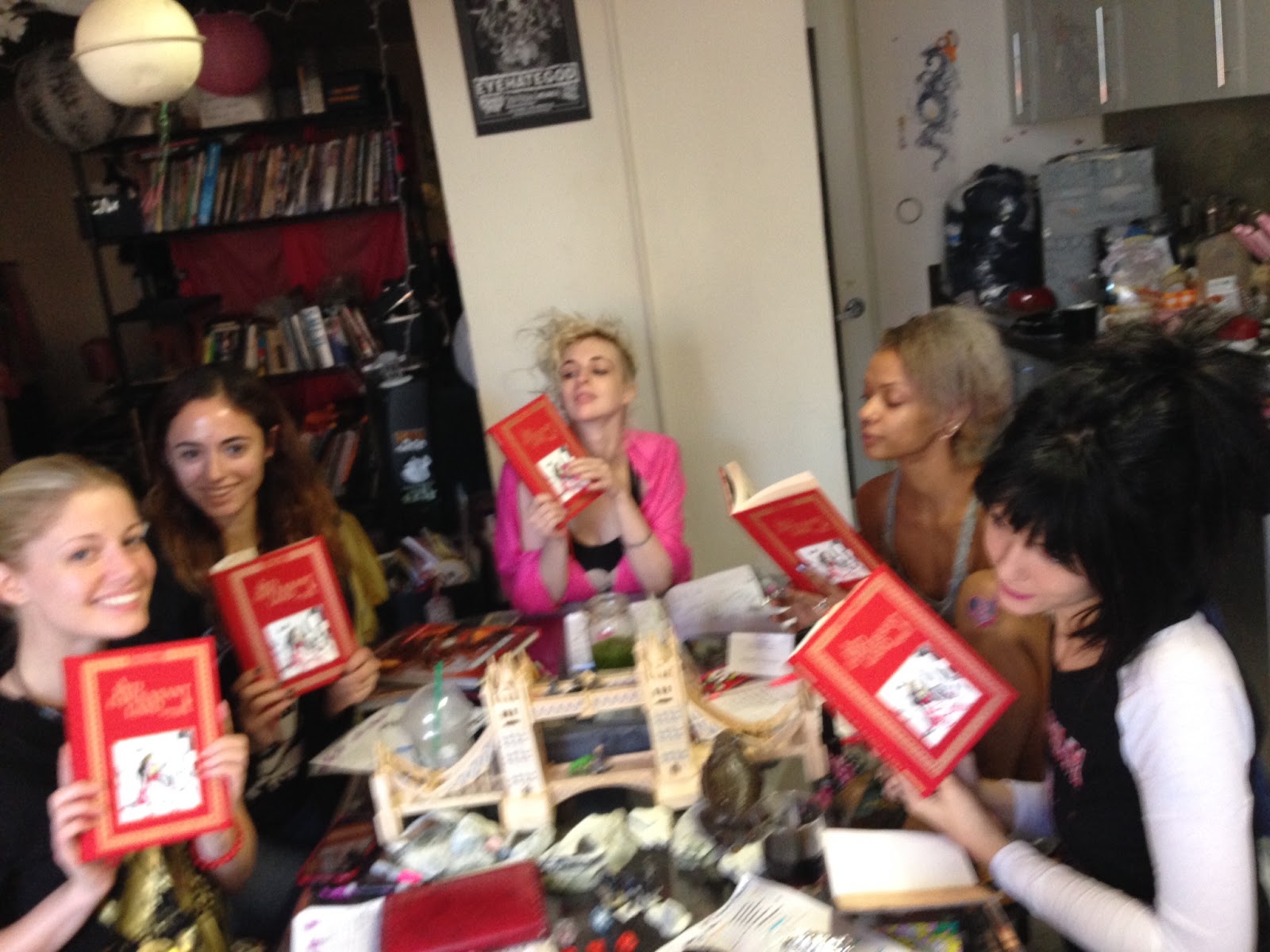 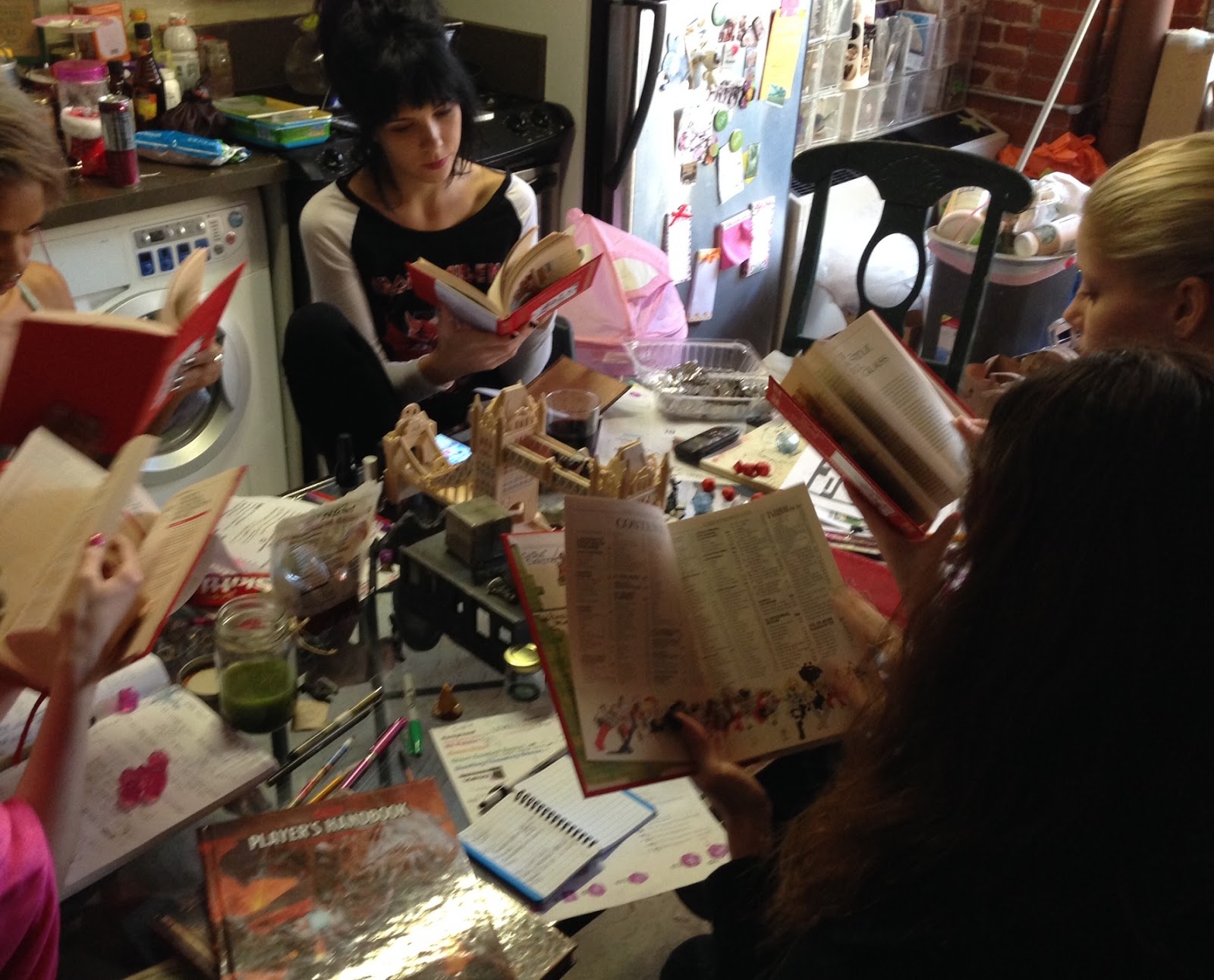 (That bridge on the table is one of those 10$ wooden model kits and comes in handy a lot. I like the look of that sailing ship, too.)

So anyway after a lot of flipping through the book being like "Oh fuck those guys, I hate them!" the PCs proceeded to get day-drunk and have a bridge-trashing party to make it look like there'd been a savage battle there.

Since the session up 'til then had been a lotta skulking and negotiation, almost everybody took the opportunity to carouse for bonus xp.  This resulted in Connie getting into a brawl with three Nephildians Alondra and Laney had offended during the ad hoc reception for Stokely's drunken wedding to a Nephilidian bishop.
...so that was weird. Stokes told the wife to meet her in two days at the Heart Palace while the party tried to get as far away as possible from the angry in-laws and from whatever was going to be left of the probably-going-to-be-pretty pissed Pale army.

So 2 hours in and all we've had is weddings, double-crosses, and breaches of etiquette. And all because why? Giving experience points for gold and for getting drunk.

Anyway after buying three dogs they went dungeoning away until there was room 5' deep in some kind of lubricating oil.

Then there was a hatch.

Then a noise like GooOOOOooogoowooIhiHikittoooo! behind the door and then Laney was like That sounds cute I open it and then...

...4 lava babies actually, luckily I have a bunch of these... 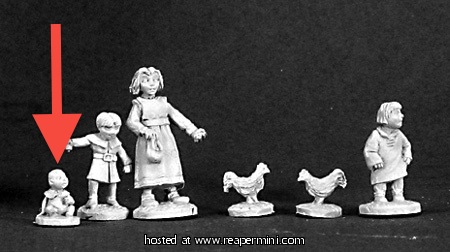 When I show he picture Laney and Mandy both immediately go "Oooooh, weird babies!" and Stokely Alondra and Connie all go "Eww, weird babies." Which I'm gonna say is the mark of a quality monster--good job Fiend Folio.

Anyway so the thing about these lava children is they aren't very tough but as soon as you see them you have to save vs charm or...

That's 2d30 damage per hug right there. ProTip: if you're running a 5th edition D&D where the players are like level 13, invest in d30s.

Though nearby, just above the room full of (now boiling because lava) oil, newlywed Stokely is spider-climbing round the room's rim when she locks eyes with the incendiary infants gurgling through the goo and begins to creep down, fascinated.

Then we all stopped playing to go to a party and there was famous people and cake and a big Hollywood house and a rockstar gave me a hat and Mandy almost punched a rapper but didn't. Got home at 7. 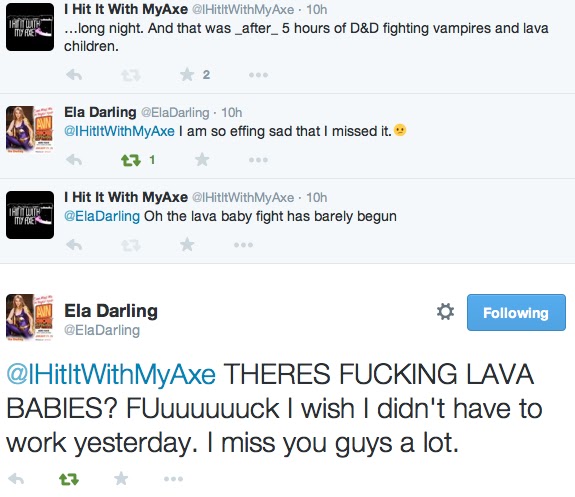 Is it an evil hat?

Leave it to a table of broads to screw up a perfectly good vampire bloodbath.

It was Marilyn Manson's, so maybe.

Was the Nephilidian rite of engagement enforced at the wedding or was that just more etiquette dispensed with?

Check the book-Nephilidians only require a sacrifice.

And now I want to insert an encounter with a vast cauldron of boiling vampiric blood in which there are lava children and a switch to enable the uncharmed party members to 'throw the baby out with the bathwater. Am I alone in this?

Hi. I read recently in an interview that you may do something influenced by the RoC books. I will drop in from time to time to remind you of this statement. This may only contain a page number such as LotD P 235 or STD P32. This is because you are carrying the fire and I very much appreciate this.

I read that interview as well. Intriguing!