Winter. 1953. John Ronald Reuel Tolkien knocks on your door, frantic again, hair awry, stressed and staring. You make coffee. He has this massive manuscript--three books worth, he can't make head or tail of it.
His publisher wants a sequel to The Hobbit, and he
just
can't
do it.
It doesn't work, he's sick of it all--The characters don't like him, the plot dribbles off the paper time he picks up a notebook. He is moving on.
"Here," he says, shoving the files and stacks of what would, in an alternate Earth, become the Ring Trilogy "you're smart: you take it. Do something good with this mess, use whatever you need. It's a collaboration now."
You go "Ok, no problem" and you set to writing--what do you do with it?﻿

I asked this on G+ and got way better answers than I expected.

At first there was lot of the expected handwringing about how Tolkien is Tolkien and you can't mess with his vision or it all falls apart, but eventually everyone got over it and came up with some gameables... 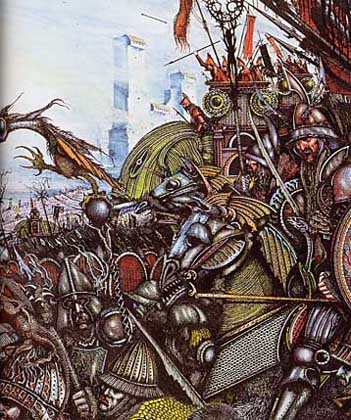 My first thought is to make Skeletor be in it somewhere. My second thought is that is prob terrible. My third thought is him saying "QUIET YOU FOOL MIDDLE EARTH WILL BE MINE AHAHAHAH"

So Skeletor is in it now. Instead of whoever was in charge before. Let us call this new dark lord Skeletoron. He will do that eye thing but he will then appear and belittle the fellowship. The Fellowship is much the same with the hobbits being scared little good hearted fish out of water. Legolas will keep talking about the elves and their importance and grandeur and everything. His stories keep changing and he doesn't acknowledge this. Sometimes the hobbits wake up and he has been watching them sleep . He sometimes smiles like he is the only thing that is real. He rarely makes eye contact. He does all that cartoon kung fu stuff that showed up in the hobbit and it's terrifying . He eats people. Well he cuts bits of things he kills and puts them in his mouth and chews them thoroughly and then delicately spits them into a handkerchief and throws it away and tells everyone how elves do not need to eat. And smiles. Strider/Aargorn is a large dog that has been made crudely into a man like Moreau thing. Gandalf is cheerful and appears and disappears and makes plans that makes little sense and the hobbits hate him more than burnt cakes. The Dwarf is cheerful and hearty and sings but refuses to acknowledge the insanity of anything around him. He occasionally recites utterly grim dwarven ballads about people being buried alive or eating rocks until they die in barely controlled muttering frenzy.

The forces of evil are factionalized between various scheming warlords like the guy with a skeletonal elephant head or the guy who is a vase of blood.

There is never any talk of any culture without talking about what bizarre monsters they breed with , what implausible war machines they have , and what giant insect they go forth on.

At some point the hobbits murder gandalf out of desperation and start standing on each others shoulders and pretending to be him.
They try and make things better but succeed in uniting a collation of forces against the Shire at which point they give the ring to Skeletoron in exchange for him saving the Shire. He instead uses the ring to sculpt the moon into a likeness of his own head and then claims that everyone will be forced to follow him now. No-one does , but the collation breaks down under complicated age old grievance  anyway. The hobbits go home and spent the last 4 pages discussing cakes. ﻿

And Nate gave us this (which is just a cool idea for giants and liches even if you don't want to read this book):

Sauron is a dragon and the Doom Mountain vomits his flame. Sauron is an intelligence that moves from wraith to wraith and has no settled form or place. Sauron is a deity worshipped by the Mordorans who have created an immense heirophantic quasi-Catholic religion and is curated by the Pope of Mordor, but he's also a real moldering dead thing on a throne in Bara-dur, and maybe the Pope is unsure whether they should allow Sauron to find the ring and place it on his dead finger, because it would challenge his power.

I still just love the idea of Sauron as a giant because then when Frodo and her wife Sam make it to Mordor they have to hide from the wandering gaze of a malicious colossus silhouetted against the fires of the Doom Mountain. And then you're allowed to imagine all the things a giant Sauron might do - sing unholy hymns to himself / anti-hymns to remake the world as he wants it; sit quietly with eyes open for several months; eat anointed elephants and stitched together groups of captive slave-elves and drink lava and foul water; bathe; piss; have the Weavers of Mordor create him godly raiments and wear them for a day and then rip them off his body and go naked for a while; etc.﻿ 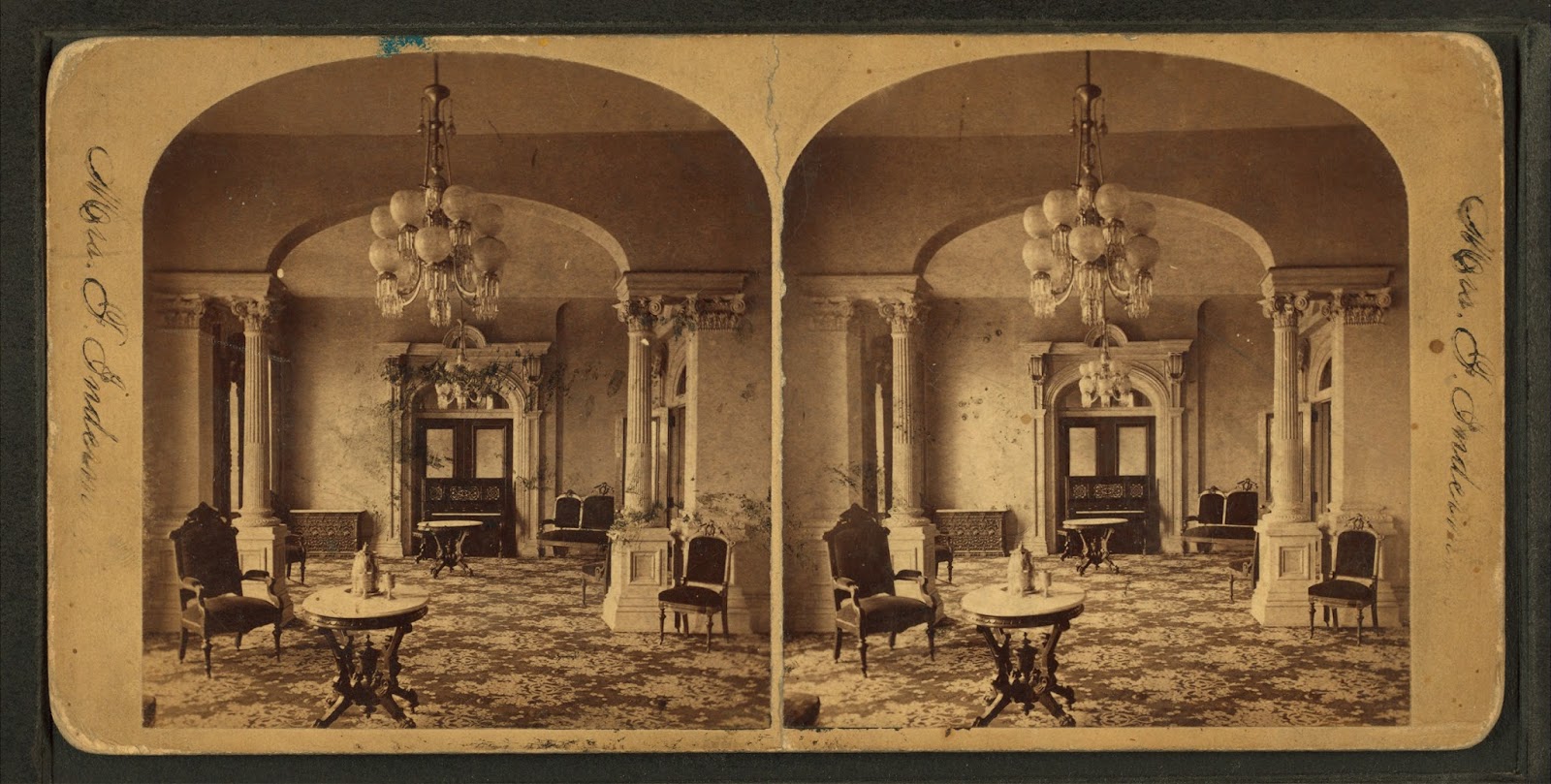 This was probably my best one:

Rewrite it almost exactly the same only it all takes place in a Gigastructure-like universe with no actual exterior spaces or hallways. So the hobbits are just crawling from parlor to parlor for the first 50 pages.﻿
-
-
-

Scrap is always wonderful, and her Tolkien makes me think of Mervyn Peake.

I'd say write it as the tragic tale of the last fallen angel trying to remake a broken world. The angel is opposed at every turn by the inhabitants of the dying world who would rather suffer through their miserable hate filled world rather than let the angel make creation "right" once again.

Set it in earlier era with more monsters, more post apocalyptic wastelands, more warhammer battles and explosions. Halflings might be 8 foot tall and change their sex at will. Adding the herculoids and some more females might help. Dinosaurs. Lots of DInosaurs. Also by the end all good guys have renounced kingship.

Set it in Darksun/Dragonlance (maybe dirtbag dragonlance: http://talesofthegrotesqueanddungeonesque.blogspot.com/2013/01/dirtbag-dragonlance.html )
hobbits are kender, Palidine/Fizban is Gandalf, Raistlin is Saruman (who travels with the party) Legolas and Aragorn are twin Tanis's. Camaron and Tika are sibling Boromir's. Sauron/Smaug is Takhisis.
Also toss in the D&D 'toons premise that the party/fellowship is just some kids who want to go home, Who are being pursed by Venger as Sheriff Roscoe P. Coltrain and the Dungeon Master as Boss Hogg (like Pokemon's Team Rocket, with Golum as their Meouth)
Also, everyone with a "g" in their name is gender swapped.

A strange gas makes everyone stupid, and it's denser at lower elevations. The dumbest are those who live underground, like the half-orcs bred under Saruman, the Wood-Elves of Mirkwood, Goblins and Orcs, all Dwarves, and especially Gollum. The only slightly below-average are Hobbits, Elves, and various peasants. Minas Tirith was built to help make future citizens smarter because they will breathe less stupid-gas up there. Those with any intelligence desperately strive to live as high up as possible, such as in wizard towers, the tops of volcanoes, etc. Gandalf experiences a brief bliss of intellect and clear thought every time he flies on an eagle, to which he is hopelessly addicted. The One Ring is intelligent, and throwing it into the volcano doesn't destroy it - it plunges it into the center of the world where it can swirl around imprisoned in and tortured by its inability to make coherent thoughts.

Well, it's supposed to be a sequel. So it can retcon but should not contradict the Hobbit. So hobbits are still hobbits, Gandalf is still a wizard but a lot can change. Elves in the hobbit aren't exceptionally good or noble. Magical treasures are suspiciously common. We don't see any great kingdoms or empires. There's something of an After the End feel to the world - there's magic treasures no one can make anymore, Smaug is the last of the dragons, etc.

So run it as a Catholic take on the Dying Earth. Instead of "The world's ending, so fuck it", the sentiment is "The world's ending so let's make the best of it." Gandalf is a survivor of the old order who frankly gets bored and a little loopy which is why he keeps setting up these quests. Also why he likes to set things on fire. It's as much to keep himself busy as anything else. Dwarves, men and elves go on adventures to dig up treasure of old and keep themselves busy. The hobbits are the only ones with the sense to just want to live a pleasant life but a few get dragged along because every party needs a sane person. The monsters are all remnants - they're a little mad because their time past long ago. There are fabulous treasures scattered about left over from past ages. Legolas and Gimli are just out for adventure. Strider is the heir to a throne but would rather be a Ranger. There aren't epic quests to save the world - just loosely connected adventures. Yes, I know it sounds more like an adventure setting than an epic tale but that's kind of true of the Hobbit.

I've had a lot of ideas like this - makes me think I should set up a G+ and start following you Zak.

If I could change one thing, instead of just being Simple English Country Folk the hobbits now embody both good and bad stereotypes about the English: Pippin is an orientalist, fascinated and repulsed by the foreign peoples and places he visits, especially orcs. It's only through him that we get a sense of orcish culture, even though he love-hates it. He probably tells a horror story of being raped by orcs while captured, but like Seven Pillars of Wisdom, no one can tell if it actually happened or it's just a fantasy he invented.

Merry considers himself urbane and fashionable and hates any sense of discomfort, but agrees to come along after he claims to find Rivendell and the Shire tedious. He either is or affects to be a homosexual.

Sam is lower-class bloke, loyal to the end to his friends, but also prone to getting stone drunk and/or starting brawls. He takes every opportunity to go wenching.

Frodo, with a doting aristocratic upbringing, suffers from learned helpless and - oh. No change for Frodo.

Frodo, Merry and Pippin are always trying to collect souvenirs, keepsakes, stuffed monsters, etc. And of course they all smoke like fishes that smoke.

eToro is the ultimate forex broker for new and professional traders.