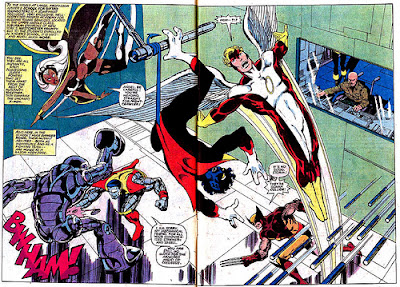 Was building my first Wild Talents PC today and...

...just realized I wrote "building". Yeah, I was building it. Then I gave up because the power system was so fiddly it evoked the word "building" and the GM was cool and built it for me and it took him like 15 minutes because he knew the system.

Which got me thinking how even though I like some things about build systems (one thing actually: as your points dwindle, you learn new things about your PC, like...she has Journalism and Engineering but no Library Use...so I guess she's some kind of charming mechanical savant) the main point of allllllll that headache in superhero systems of taking 3 points from here for Limited Range and adding 2 points there for Advanced Loudness is for people to be able to estimate the power level of the campaign.

Which, with stuff like Champions and Mutants and (Would you like Masterful Jump or Jumptastic Finesse?) Masterminds and Wild Talents seems like a tremendous amount of lonely work for a pay-off that's not too terribly grand.

Then I thought why not sum over all that?

So here's the Danger Room Funnel:

1. Everybody make a PC. Just throw together somebody that looks like who you wanna play, don't worry about the points.

2. GM starts the session: the players are performing a training exercise. They're fighting a bunch of clones or robots and each other in a massive battle royale. Anybody who gets knocked out immediatley gets healed up and sent back in.

3. GM and players monitor the results, then tweak their PCs according to their performance.

4. All the changes are explained away by a massive bombardment of cosmic rays or Bendis starting a run on the book or some shit.

5. Players who intentionally play half-assed in order to not have their powers adjusted are declared boring and excommunicated.

Yeah it takes 2 hours but so does deciding whether your guy has Advanced Smell or Smelling Acuity so why not spend those 2 hours playing?
-
-
-

This makes too much sense!

I love point buy systems because I made up my own superheroes before I discovered RPGs. So here's how I 'build' a character. I think of one. Give him a name, story, costumes and powers and than see what stuff in the rules does that.

M&M, Champions and Wild Talents don't really do all that nitpicky stuff by themselves. It's there if you want to buy it but generally I don't.

I don't understand what you mean.

I mean, a point buy system usually works like: you think up a guy in detail.

Then you spend an hour or more trying to get the system to express the idea you already had.

It doesn't do it "by themselves"? How does it not? Like as soon as I want to invent a power in Wild Talents I have to go the back and start building it out of Legos. Same with M&M.

"It doesn't do it "by themselves"? How does it not? Like as soon as I want to invent a power in Wild Talents I have to go the back and start building it out of Legos. Same with M&M."
Champions for instance, you can keep PC creation moving and buy your Cyclops Lite a 30pt energy blast. Or you can dive into fraction point cost hell and make his energy blast indirect (cost+1/2), armor piercing attack (cost +1/4), etc. But it was always more fun for me to build a PC that was close to my vision but didn't make me do calculus. But that was what worked for me.
I hope you intend to further flesh out the funnel, sounds like it would be more fun if you could play rather than number crunch your fantasy bad ass into being.

Here's a trick - Power Pool. I'll give it 60 points. Now I tweak it with, variable advantage, variable disadvantage, limitation: must be explainable as speed.

There. Wow, that took like 5 second and now I'm the Flash.

Thing is, I have overly complex and crunchie rule system but point buy games like these let me get crunchie or not depending on my mood and my vision for the character.

If you mean you havea choice of:

2. playing "build a power with legos"

...then neither of those options are appealing.

"Here's a trick - Power Pool. I'll give it 60 points. Now I tweak it with, variable advantage, variable disadvantage, limitation: must be explainable as speed.

"There. Wow, that took like 5 second and now I'm the Flash."

Is, I'm sure, very fast once you know what all the jargon in that 1st sentence means, but it's hardly self-explanatory to new players. Meaning they have to read all the power rules themselves or have the GM make the powers for them,

And since the power creation rules don't much intersect the actual combat adjudication rules, that's someone reading something that never matters _except_ during character creation.

@Zak S, Yes and you are not alone. I can totally see the turn off in those alternatives...

If you play thru "the funnel" I hope you post the play report . I've been gm'd thru char creation, white wolf, but I can't recall a game that put such mechanics in ink. That's some intriguing shit.

Why address this specifically to superhero games? D&D and similar class/race/level RPGs are far more "building" intensive than point-buy systems like Champions or GURPS.

Also, if you are averse to character building in a Superhero game, I would recommend the Marvel Heroic system, or a hack of its base system Cortex+. Me, I like character building when I'm the player but hate it when I'm the GM (as a player, I can devote all my attention to filling in details and working out strategies in depth for a single character, but it becomes a chore to be expected to do that for a whole cast of NPCs every session.)

Re: Why not just superhero systems?
Yeah, it could apply to a lot of games.

As for Marvel Heroic or Cortex, no fucking way. I've played it and it's waaaaaaay too story gamey for me.

I use FASERIP plus maybe this :
http://dndwithpornstars.blogspot.com/2011/01/here-have-universal-superhero-character.html if I was running the game.

One reason I really like Icons--very much in the vein of FASERIP, and even easier to roll up a character and start playing.

Point buy systems that include things like disadvantages or using limitations to discount power costs *can* create a sense of investment in the character, where you fine tune the workings and form a connection.

I agree such systems tend to be newbie-unfriendly though, so it's imperative that the GM be knowledgeable and help move the process along, or even better, does all the paperwork after listening to what you want, then giving you options for limitations (if needed to get the point total square) or suggesting extras (like range, potency, stats, or useful extras: 'I also gave you a 2 points in first aid')

The danger-room idea is also a good one, to help introduce players to a system and fiddle and tune their concepts...

All options come down to reading your players and catering to their personalities as best as possible.