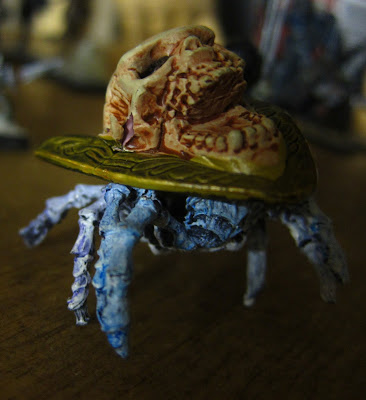 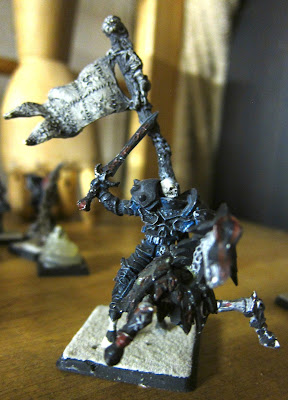 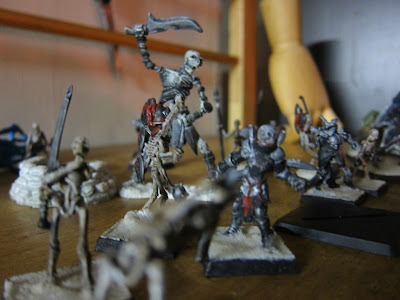 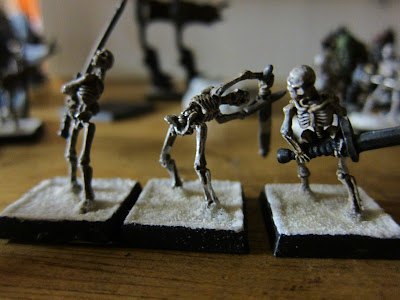 All these skeletons are left over from when Reaper dropped a dumptruck full of miniatures on us to shoot the documentary about our game a few years ago. These guys and about 99,986 other skeletons have been hording around my game ever since.

The group's plan for Sunday was to lounge by the rooftop pool picking through the 3.5 player's book picking spells and otherwise talking strategy while I repaired the miniatures, nailed down the army's mechanical gimmicks and kept an eye on the new pet gecko--and then to order delivery and have an epic fight at sundown until everyone was dead or too tired to move.

Which is a fucking Sunday right there.

I already had some character sheets for the new players... 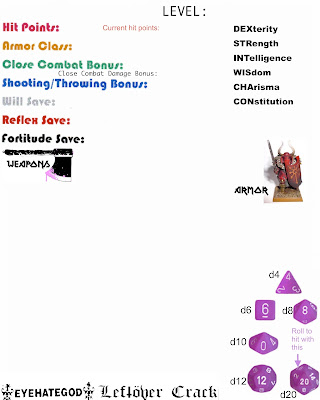 Unfortunately shit came up and we had to cancel...

Good news is I have at least a few more days to tighten the screws--I got terrain choices mapped out, army speeds, composition of the sides, some mass combat resolution rules, and some puzzley elements to the skeleton horde's combat profile but I am of the opinion that you can never have too much freakshow in a set piece like this if you know it's coming.

The ones going in so far...

1. Mulak the Bold has recently discovered the Immortal Zoo of Ping Feng wherein many powerful mystical animals are said to reside.﻿

2. Kaip Dorn owner of the Stuck Pig butchery has 20 50-gallon barrels of pig fat that can be turned in to napalm with a few simple additives

3. Roger: a large fellow with a series of different mining tools, he knows how to use them all and has a few different people in his employ to work them too.

4. Mildred Kack, midwife, has a bathtub filled with holy water, blessed by a vagrant (and slightly crazed) cleric

5. Laurent: A low level thief who runs a gang of child informants that are known as excellent scouts and look outs. They know the surrounding area well.

6. Kert Thew, a local chemist, has developed a musk that disguises living creatures as undead. Though it only works on the mindless ones. There is perhaps enough of the musk for d4+1 creatures, as it is difficult to gather the rare herbs during this season.

7. Obsessive compulsive hoarder Mikanos Raedronovic has amassed the largest collection of broken crockery the world has ever seen. It is organized and suborganized by place setting, general design, pattern design, color, and break location. He died of blood loss after falling in to a mountainous pile of: Soup bowls, Orside Revivalist, Classic Rust, Lip crack His well-known collection remains unclaimed.

8. Loris the weak minded: A simpleton who has memorized all sewer pipes, canals, and waterways within and up to the exit of the city walls including many secret exits. He cannot handle stress and will only speak about waterways. Has no social skills and does not know how to interact with individuals. Lives with his doting mother.

9. The antipope of Vorn Rhombicus I. could be found and convinced to come out of hiding helping with his turn undead abilities. That would probably cause the hitherto unknown rift in the church of Vorn to come to the public and may cause civil unrests when clerics of Vorn start taking sides on either pope's side.

10. Helvetica Black runs a small printshop off Delerium Lane. In one of her more drunken moments she swore she did the typography for the Book of the Dead— and she stole the printer's proof. (also, my next FS character).﻿

Yay! Gus made the cut! He's the Henry Rollins of pig farmers! But with dynamite.

Sorry shit got postponed man, but it'll be epic when it happens!

Love the character sheet with the dice on it. Wish I had that a few weeks ago when I started with some new players.

Nice newbie-friendly character sheet. The dice cheat sheet on the bottom is a great addition.

I thought that was a great idea, and helps new players quickly understand and pick out those specific numbers from all the other stats on the sheet.

If I was building it from scratch I'd probably do that. This was just a fast-and-functional thing

Wish I was in your google+ to see the wall. Those skeletons look badass though. I love the crab looking one. Is the one with the huge crown the leader, or spell caster type skeleton?

The one with the huge crown is the Hex King

To add me on G+, send me a link to your G+ profile and say you want to be in my RPG circles

K I have a google plus, but I rarely use it. So let me try to find your google email.

I can't find your email in the blog. Do I send you the link through hangout at the ZakS front page?

Sent though your google plus. I think you can click on me to get the link.

And the captain of the All Star Undead Lich Bowling Team is ...!