All Mouths Lead To One Stomach (The Concentric Dungeon) 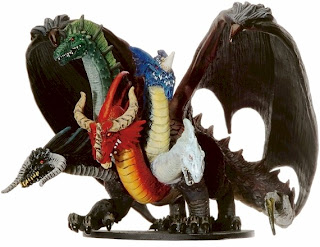 Ok, so megadungeons are fun, right?

But the problem is you have to tell your players like "This is where the action is, ok? Go in the dungeon a lot or else I've prepped all this shit for nothing."

And, in general, dungeons in a sandbox are like that: on the one hand you wanna dream crazy stacking dreams upon dreams, on the other hand, the players have to have the freedom to go wherever they want.

So often, instead of a big dungeon you end up with lots of little ones.

Now as you may or may not know, my solution to this in my game is that, just beneath a thin layer of opportunistic plants, my whole world's just solid dungeon. One big one.

The little ones all feed into the big one, like so...

So like ok first of all you know how one dungeon can have two geographically disparate entrances... 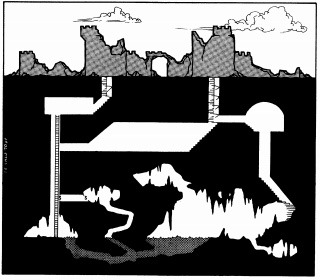 ...so then now imagine that points A and B below represent the location of two different small dungeons... 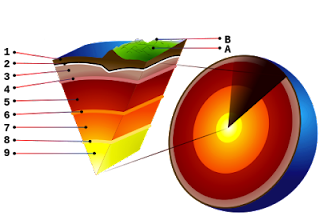 And both sit above (and are wrappped completely around) a level 2 that is smaller than this vast level 1, but which is accessible from many places on that big level 1.

And the still-vast level 2 leads (through various different exits) to a smaller level 3, and below that, a smaller level 4 etc etc on and on until at level 9 you have a really small dungeon with like Demogorgon and 3000 horribles and treasure and godhood.

Basically this allows each "separate" dungeon on the surface to maintain it's own identity (this is the lava dungeon, this is the undead dungeon, this is the dungeon under the mugwump castle...) while cutting down on your prep time as GM--you only have to make one big dungeon with lots of subgenrefied and differentiated "feeders".

There's no reason players even have to know this--they can go in, kill some local boss, find some treasure, then come back up without ever investigating that trap door underneath the sarcophagus--which is what will usually happen.

Also, in a sense, the megadungeon moves with the campaign:the players can sail from Pseudotolkienia to 1001Nightpasticheland and the megadungeon is still down there beneath them.

Now my campaign world is a cube, not a sphere, so it is more like this... 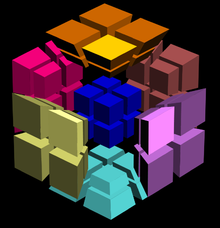 Here's a secret--this is my game's Big Diagram--it shows how various dungeons and dungeon entrances are connected. You have to imagine the big grey dots are ground-level dungeon entrances and the pentagram is at the center of the planet.
Each color is a distinct subdungeon, with its own stuff going on. Getting from one to the next usually requires tripping some lever or finding some feature the inhabitants don't know about.
-
-
-

did you ever see my dungeon techtonics blogs? Fits in nicely. I also have dungeon dimension connect all and populate any good hole.

Im reluctant to put link her but..
http://elfmaidsandoctopi.blogspot.com.au/2013/03/dungeon-by-fantasytechtonics.html

Neat little idea. I think the idea is one of the reasons why Undermountain does so well. It's a dungeon but there are other things to do.

Numenhalla lies beneath all cities, all mounts and valleys, and all lands.

That said, "We're playing Rappan Atthuk" is preety completely equivalent to "We are going to go through the Giant's series" or "This campaign takes place on Mystara"

I once did some brainstorming (in a post not worth linking to) on how many levels a megadungeon could have if descending 100 feet = descending 1 level:

"Working on the assumption of a spherical fantasy world that's equivalent to the Earth, the crust is about 164 to 165 levels deep in its thinnest locations (bottom of the ocean.) Thicker portions of the crust could in theory support 2,290 to 2,300 dungeon levels. Infernal domains in the mantle or core (reachable ethereally or astrally) could go down another 209,000 levels below that."

This makes me wonder what kind of funky shit occurs on level 146,234

I love repurposing maps, although I never would have thought to use a stadium seating chart as a dungeon map. Good job. My players have been "exploring" a map of Modesto for the last five years. Every now and then, I use an actual street name, just to give them a chance.

Well, in my scheme of things, levels 2,301 through 209,000 are ethereal; they aren't physical excavations. I use a "no planes" cosmology, where "astral" and "ethereal" are states of matter with funky properties and places like "hell" exist in physical locations.

So in my scheme, Level 146,234 is part of Hell or the Abyss. However you want to interpret that.

Has been done before, it was called Metroid :)

I believe you have made a profound error: Zebes in Metroid is hollow but its spaceward surface (the "hexmap") only contains a few entrances to the dungeon beneath.

This jives nicely with someone's... (Scrap's?)... idea of a living dungeon that infests a planet and has to be stomped out.

Someone else (Gus? Richard?) suggested rhizomatic dungeons, which is pretty much the same thing, but with a shift in emphasis.

I really like this. Even better, when the party does stumble on the back entrance/exit to an old, mostly-completed dungeon, they're running through it totally out of the original order, they may not at all get what's going on. You've got all this free, interesting content by playing the old dungeon backwards, so to speak.

EVEN BETTER: if the players/party ever does figure this out, it adds an entirely new, interesting dynamic to things: can we get the x from this dungeon over to the y so they can kill eachother, etc, etc.

How do the sub-dungeons actually connect, spatially? I'm assuming the planet's circumference is a few hundred or thousand miles, and you obviously can't map all that in 10-foot squares, so how does it all connect? Are there convenient miles-long slides that lead to the lower level? Or do you simply think with portals?

convenient miles-long tunnels "You walk for several hours, following the wererat tracks until..."

Hi Zak. I wanna write an article and I'd like to include some brief reviews from you/your group (kinda several Q&A). Would it be possible? In that case, how could we contact?

Sorry about the topic deviation but I didn't knew where to write this. And sorry for my english.

And great blog. Keep up with the good work :)

my email address is easy to find. if you can find it, you can interview us.

So basically the Underdark?

Hi. I think I already found a contact mail at zaxart dot com, but it's a hotmail one. Is that one? I'll just mail to check it, but because of my strange nickname, hotmail always puts me en the "spam" folder. Be aware :P

Think of it as a specific way of conceiving and mapping the Underdark relative to the world above.