Ok, so my players accidentally summoned Cthulhu and next week they have to fight him. Luckily I have the 1st printing of Deities and Demigods, with Cthulhu in it... 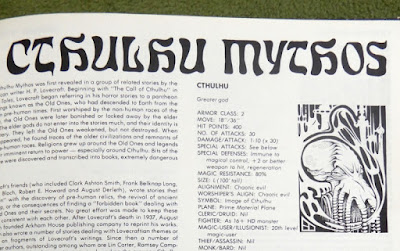 So I'm all ready to play on Friday.

Then a podcaster calls me up...

Podcaster: "Hey man, can I borrow your Deities and Demigods?"

Me: "Why would I do that? Your podcast is terrible."

Podcaster: "I'll give you a dollar!"

Me: "Ok, fine, as long as you get it back before my game on Friday. Because: on Friday, I am running a game."

The Podcaster has 10$ (per customer). However, they still need to get my book back to me before game time and they don't have it.

However however, The Podcaster knows that their friends have been saying that Old School D&D eats babies. So they have them on the podcast.

Podcast Guest: "First of all, Old School D&D eats babies, also I hear that The Podcast is selling hundreds of copies of Deities and Demigods so it's pretty easy to get them, they're a dime a dozen."

After hearing this, many people no longer want their copies of Deities and Demigods. 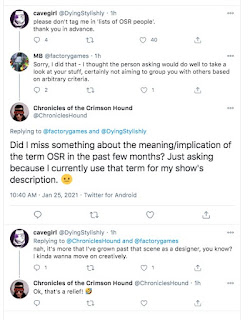 They want to recoup their losses, so they want to sell them back to The Podcast.
The Podcast's like "Sure, we'll buy them back...for 4$".
Everyone's like "Look, that's not a great deal, but I don't want to have to sell this book later when it's worth even less, so fine."
Now The Podcaster no longer has 10$ (per book) but they do have 6$ per book (they made 10$, bought it back for 4$) plus the book.
They have a nonzero profit from selling, plus they still have the original merch. They then give it back to me, having made a profit. This works because to the supplier (me) the main interest in the book is the book whereas Podcaster was mainly interested in buying and selling it. It's value to me is static, its value to him goes up and down based on what other people do or don't want.

So, now, what would happen if, once all those copies were bought, instead of accepting that the OSR eats babies, people just kept buying those copies of Deities and Demigods, kept wanting them?

Well, the price would go up instead of down, because they're in demand. Suddenly: 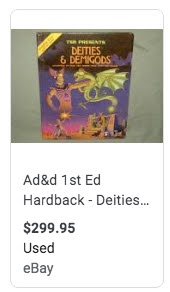 And the Podcast still needs to get my book back to me by Friday. We have a contract. That's the law. So not only is the price high, but they are obligated to pay it.

I get my book back, my players meet Cthulhu, they establish a psychic link using Psionic Ability I and decide to be friends instead of fight him. They're all happy.

So: everyone who bought a copy of Demigods off the podcast will get rich, I get my book back, and the only loser is the Podcaster who was trying to trade on the book declining in popularity.

I'd almost feel sorry for her.

It's difficult to tell if we'll ever get to a point where Chris McDowall, Shoe Skogen, Fiona Geist, Jared Sinclair, and all the other people who enabled Cavegirl will see enough percentage for themselves in cancelling her to admit what she did and that she manipulated them.

It would require a lot of people to admit what they did was stupid and that how they attacked me was influenced by her--so I'd lean toward no. On the other hand she's done so much harm it's hard to see how she'll last

She'll flame out of here, flame out of there. Lots of people who want to help out a trans woman(which is fine) and don't know someone well and don't the interest to google. It all gets washed away and its too much work to bring up deleted shit.

So what would have to happen to change that?

Besides: she fucks her Kickstarter up.

if we're playing the fantasy game, I'd like the internet to be reorganized so that everything is wiped, completely, and all websites agree to be a part of a network, or you don't get to be a part of the internet. There'd still be pirate net, sure, whatever.

Point is, the average joe needs to get a license, and thusly, analfart33's name can be clicked on to reveal it'd Raymond Smith of Chestershire new hampture. And I can see every site he posts on and casually browse EVERYTHING he posts. There are issues we can solve, many LBGT people use anon sites due to living situations, perhaps getting special dispensations from the government (with that information being easily retrieved by subpeona). Then we get sites to agree to do range-bans of people that are toxic. You're such an unlikeable shithead on gamefaqs that you're pre-banned from Reddit, etc.

On the bonus, you would've already tracked her down and wrung an apology out of her via court. If you'd have been cancelled in the first place. Since a lot of sex offender databases are public in the states and other places, just imagine being able to go "this man who accuses me of abusing my ex is a literal kid diddler/actual wife beater/has 14 DUIs, so who are you gonna believe?"

Of course, there's no real way. I thought the suits were gonna help, but it seems like the general vibe about you on sites like that is that you're still an evil maniac, still banned, etc.

Of course there's a way--people get cancelled all the time. This isn't a science fiction scenario.

So: what would have to happen to make people actually do the right thing for once and cancel Cavegirl?

as an aside, I dont think her shitting the bed on the kickstarter would do much. Don't you have many harassers with legions of failed kickstaters?

Olivia Hill is a meme completely outside of tabletop RPGs for her stupid "fuck all gamers" takes, especially that one about the cyberpunk genre. Or that one where she had a mega fucking meltdown because some gacha game used her character she came up with for a gacha game as a gacha game item, products designed to make (usually sexually) appealing characters to wring dopamine addicts out of their money.

And yet, I'm sure Olivia being the meme that she is can still go "zak did many rapes" and get all the regular trash liking her stuff.

It is, no doubt, a target-rich environment. And, yes, that involves many failed kickstarters.

But I'm still asking my question about Cavegirl.

"So: what would have to happen to make people actually do the right thing for once and cancel Cavegirl?"

If there was a way to track her down, pull her browsing history up from her IP and get the proof that she was one of the nazi trolls that plagued the /tg/ thread for years, that would be enough. Interesting timing that every time cavegirl posted "greg" would appear and start screeching the n-word and spamming swastikas and shit. Sure weirdos like that exist, obviously, but in my experience, a lot of shit like that is false-flagged. Channer culture requires a small amount of deception (replying to yourself to stimulate discussion, posting "wrong" answers to trick people into replying with correct ones, etc)

Ok, what else you got?

i dont know if this is a game but I feel like you have ideas of your own.

you cant use the people she has falling outs with because when she does, she leverages clout against them and does the whole "toxic people in my life cut them out" shtick. thats all i got.

Oh I certainly have my own ideas.

Sorry to hear you're tapped out, K.

Erased. No personal attacks. If you have a question for another commenter, ask it. Don't assume someone else's motive, emotions, etc. unless you can prove.

Erased. You don't get to comment until you address the last time you broke the rules. (In this case: attempting to spread misinformation.)