Inauguration day. This is only a little political but trust me, it'll be worth it. 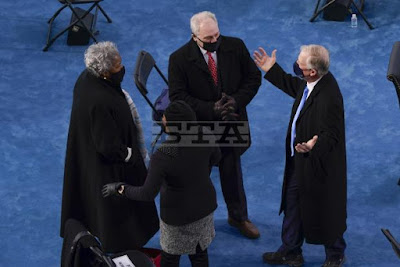 Over on the left of this inauguration photo there's Donna Brazile, former chair of the Democratic National Committee. She wrote a book a little while ago that mainly got press for revealing how, when she took over the DNC after an emergency, she realized the party may have been in the tank for Hillary all along in the primary against Bernie. While that's all interesting and important, what's been criminally overlooked is her book is well-written and fucking hilarious.

This is from during the campaign, while Brazile's staying with philanthropist Glenn Hutchins in Martha's Vineyard and working with Obama's team on disaster response in Louisiana.

So while I was supposed to be relaxing in the comfortable rocking chairs on Glenn's porch on Martha's Vineyard, I was on my phone and iPad communicating with FEMA and with the president's staff about the record flooding in Baton Rouge, making sure that resources were going to the places where they were needed, and fielding calls and messages from hundreds of people in my extended circle who were trapped or displaced by the flooding of ten rivers. And into the middle of all this walked the Damn Duck.

Evidently someone in a Donald Duck costume kept showing up at Donald Trump's campaign rallies calling him out for ducking the release of his taxes. Ha ha. With all the noise and confusion and flat-out fear of this campaign, the duck did not surface to the level of my other concerns until one of my bosses at ABC emailed me. The message was titled, "I hate to bother you on your time off…" and it read: "BUT—Richard Bates of the Walt Disney Company is trying to reach you about the DNC's using Donald Duck. He is desperate." Then the phone rang, and it was Robin Sproul, the DC bureau chief from ABC News.

"Donna, you have got to stop using the duck," she said.

"Well, the Clinton campaign and the DNC are using Donald Duck at these Trump events," Robin said.

I looked online to see what she was referring to and suddenly I was seeing that duck everywhere: in Los Angeles, in Charlotte, North Carolina, and even one going down the escalator in Trump Tower, just as the other Donald had to announce his candidacy. This duck got around! The Damn Duck was even issuing press releases, questioning if Trump was not releasing his tax returns because he was not as rich as he was claiming to be, or didn't really donate to charity, or didn't pay any taxes. And press reports said that Donald Duck was from the DNC, intending to follow Trump wherever he appeared to heckle him for not releasing his taxes.

I sat on the porch at Glenn's looking out toward Katama Bay, stunned by the idiocy of whoever thought this was a good idea. I have never been a big fan of people dressing up in animal costumes to make a political point. This was not the Macy's Thanksgiving Day Parade and it was not Mardi Gras, either. I'd been chair for less than a month, but I thought I'd taken control of all these different factions and finally calmed things down. Here was evidence that I still had to resolve many ongoing things lest the party continue to be embarrassed by these amateur stunts. Donald Duck is owned by Disney, which owns ABC. In addition to all the other trouble the party was in, we just might have a trademark infringement case on our hands. I had to stop the Damn Duck.

"A duck?" I said to Glenn Hutchins. "How the hell did a duck get past me?"

So I called Patrice at the office. She said she would have someone from the press office call me, because they had been coordinating it.

I hate the duck. When I was a kid people used to call me Daffy because my name was Donna. I don't want no damned duck, and now Richard Bates, the ABC vice president of government affairs is calling me. I called the DC office again.

"Why are you worrying about the duck?"

The idea that the campaign—and as far as I knew it was not the DNC—was paying someone to follow Donald Trump around in a duck costume struck me as the opposite of what we should be doing to keep the focus on Hillary's strengths as a candidate. And, by the way, was this not proof of paid protestors? Every time Donald Trump made the claim that we were paying people to protest his rallies, we denied it furiously. That was just not something that the Democrats would ever do, and then here was the Damn Duck. I started emailing up the ladder at the campaign to get to someone in a decision-making role to fix this, but the first person to respond was Brandon.

Brandon said this was no problem. The campaign and DNC lawyers had signed off on it and besides we had not heard anything from Disney.

The reason I was emailing was because we had heard from Disney.

I was sitting on the porch of this beautiful home hearing the soothing sound of the ocean just a few hundred feet away but I was spending all my energy on this duck. Glenn was part owner of the Boston Celtics, and inside the house in the kitchen were three very fine-looking basketball players making me breakfast, and I was out here where the WiFi signal was best, trying to get someone to pay attention to the risk posed by this Damn Duck. I was supposed to appear on that panel about the presidential race in a few hours, but I could not settle in and focus on the comments I was going to make. Who could I get to kill the Damn Duck?

By the afternoon I had made some progress in convincing some of the campaign leaders and lawyers that the duck had to go, so I could concentrate on making my case for Hillary at the panel, but the duck was always in the back of my mind. I sat at the front of the Old Whaling Church in Edgartown, my iPad on the table in front of me so I could follow the updates the Obama administration was sending me about its response to the storm. I was in touch with the governor of Louisiana and the mayor of Baton Rouge as well as with FEMA. In between notifications from them, I was getting distracted by messages about the Damn Duck.

By the next morning I got a call from Charlie Baker wanting to know why I was worried about the duck.

"Charlie, because I'm still—I'm on leave from Walt Disney, which owns ABC. I'm an ABC contributor, and it's their duck. Not my duck. Not the DNC's duck. It's their duck and they do not want us to use the duck. Please stop using the fucking duck."

I hung up the phone and looked online where I saw they were using the duck at a noon Trump event.

I'm slow to anger, very slow, but once I am angry, get out of Delores's way ("Delores" is Brazile's nickname for herself when she's angry -Z.). I called Marc Elias, the lawyer for the Hillary campaign, and told him that I had heard from ABC and Disney about the duck and he had to kill it.

"The duck is the intellectual property of Disney. They could sue us, okay? Do you want that story out there? Hillary's about to go to California to raise money and she's going to see Bob Iger, the CEO of Disney, who is holding this fund-raiser, and this is coming from him. What do you want to do? Have him cancel the fund-raiser? I know you all want that money. So get rid of the fucking duck!"

"Donna, this was Hillary's decision to use the duck," he said. He explained a close friend had suggested it to Hillary and she thought it was a great idea. Apparently someone wanted to use Uncle Sam but Hillary's friend vetoed that, saying a duck was a lot funnier.

Was he kidding? He was not. What a brilliant decision! Can someone get this message to her? Is she the only one who can kill the Damn Duck?

Marc Elias was the man to call. By noon he had killed the duck once and for all, and the next morning I was able to enjoy my breakfast with the NBA. I enjoyed it very much, in fact. 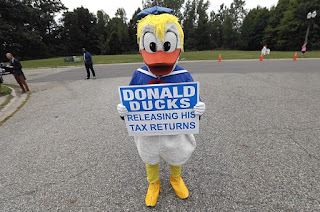 Email ThisBlogThis!Share to TwitterShare to FacebookShare to Pinterest
Labels: about books, etc, etc.

I have to read that book, it sounds fantastic!

Marc Elias is awesome too. He and his legal team lead the fight against Trump's lawyers all through the election cycle. 64 wins across multiple states, and the only loss was just a curing date dispute that was upheld for a couple hundred ballots in PA.

See? That's what every click bait headline aspires to: surprising, enticing, and ultimately delivered-on.
You penned a better article than half the output of the Atlantic.