So, if you're like me, you're sick of rolling random wilderness encounters in a sandbox campaign and then it just says like "57-Ghost" or "34-Venomous snake" and then I'm like "Fuck who wrote this table?" and then having to be like "Oh right, I did".

So I wrote a whooooooole big table of wilderness encounters with

100 Civilian encounters, like:
90 Halfling(s) moving to a new home in The Halfling City, or one of the Pudding Coasts (d4).
91 Halfling(s) moving to a new home in elven, human, or dwarven lands (d4).
92 Halfling(s) on so many drugs just vibing.
100 Dubious travelers, like:
265-266 Lone wererat disguised as (roll on Civilian table), it will be moving in the same direction as the party and share the journey with them, waiting for an ideal time to call in d4 compatriots, steal something valuable, cut their throats, and sneak off.
267 Wererats in their half-rat form (d6+1), chewing on dead horses just off the road.
268 Tracks enlarge and change from rat to human, leading to a wererat den beneath a bridge or in a ruin (2d6 wererats).
100 Military encounters, like:
309 Gnoll hunting party—clan out looking for big game or fast-moving enemies. 3d6+2 gnolls all mounted on giant boars, gnoll chief hunter, also mounted, with vulture or eagle.
310 Gnoll hunting party taking prey—as Hunting Party above. Taking: 1-7 Herd of deer, 8-11 sheep and goats, 12-17 wild horses, 18-19 giant monster, 20 unicorn.

600 A colossal hollow statue of Vorn, now in pieces, houses three ogres who live in its upturned head.

601 (Night) Inexplicable corpses, a few hundred feet from the road, the work of a banshee haunting a lonely moor—the ghost of a woman murdered by the local lord. Bringing the lord to justice sets her to rest. (Day) Just the corpses.

602 (Night) Inexplicable corpses, drowned in a shallow swamp, the work of a banshee—the ghost of a woman drowned by the local lord. Bringing the lord to justice sets her to rest. (Day) Just the corpses, visible from a bridge over the swamp water.

603 (Night) Inexplicable corpses, drowned in an old well near the road, the work of a banshee haunting a well—the ghost of a woman drowned by the local lord. Bringing the lord to justice sets her to rest. (Day) Just the corpses in the well.

604 (Night) Inexplicable corpses, dead in a ruin the road to which the party may be drawn by horrible weather, the work of a banshee haunting the ruin—the ghost of a woman drowned by the local lord. Bringing the lord to justice sets her to rest. (Day) Just the corpses in the ruin.

605 Massive extending graveyard, site of a first-war battle between goblins and elves. Possessing ghosts will attempt to take control of party and force them to kill each other.

606 Plague pit marked by crude stone grave markers. (Night only) Danse macabre skeletons will play their song and try to get the party to kill themselves.

607 Lonely farm, dilapidated and abandoned, a haunted scarecrow stands in the field. Only holy water or magic will exorcise it.

608 An ill hound is visible on the ridge. If it is not slain (by holy water or exorcism magic) before your next encounter you’ll be at disadvantage the whole time.

619-621 Road heads straight through a ruin, the caryatid columns are oddly intact. They come to life as stone golems and attempt to kill anyone within 10’ of the ruin.

622-623 Ruin in the center of a shallow lake, the caryatid columns are oddly intact. They come to life as stone golems and attempt to kill anyone within 10’ of the ruin.

624 Two-headed troll lives under a double bridge, second head is a wizard.

628 ...a spiralling thornchild.
629 ...a nymph whose song inspires victims to drown themselves.

A ruined church is home to...

A crumbling graveyard...
675 ...contains a black reflecting pool, in which dwells a black-eyed

looking for a second head.
678-679 ...where a massive hollow treant has fed for ages on the

riddles or be eaten.
686-687 ...is the only way over a broad river for miles, and a Hallow Treant has completely grown through it.

A hollow tree contains a valuable treasure but is home to...

An island in the center of a lake...

And if you're like "Oh what's a cannibal mermaid though?" so I also did a bestiary. It's still growing but it has all the monsters from these tables in them.

And I also wrote a bounty-hunting adventure to go with them, with a spooky swamp and a vampire. 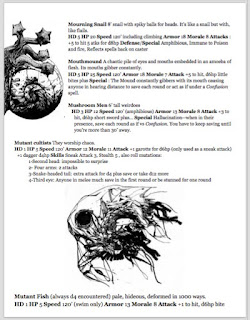 Excellent!
Do you think striking off these kind of unique things as you encounter them is a good vector to add innovation? I have been toying around with the idea of creating tables that get marked off as you go, and escalate when the number is rerolled. Things like one goblin on a roll of 75 , but once marked off, the next column would have perhaps D4 goblins on the same roll, and once rolled again would continue to escalate in this fashion.
Maybe this is a way to scale a random table in the wilderness or a large dungeon as the players get stronger without creating new tables or using tougher ones.
This would require smaller tables however, but I would love to know what you think!
I really dig the (Night)-(Day) rolls you have here, makes me wonder if you could also change rolls based on the amount of players that encounter them, or the amoumt of time traveled, or supplies...
Lots to think about, and this Cube World is one I might have to save up for, alongside some other cool looking ones!
Thanks!

This is really excellent!
This makes me wonder if marking off parts of a encounter table could be a good vector for innovation, I have been toying around with an idea of escalating rolls for a while.
I would love to know your opinion on this, the basic idea being as encounters get rolled, they get marked off and the next time the same number is rolled, there is a tougher version or more nuanced decision in the next column.
So for example, a roll of 75 might be a goblin, and once marked off the next box says D4 goblins, and so on an so forth.
This would potentially allow for a table to grow and become more challenging for players in a single wilderness or dungeon, and without changing tables or just adding numbers.
I really love the (Night)-(Day) rolls you have here, and like the tables you often include in your work where depending on the time different die are rolled, these table entries inspire me. Makes me wonder if time traveled, supplies held, or party level or count could be balanced and used the same way...
This Cube World looks excellent, and maybe it is time to save up and get a couple of the other ones I am interested in!
Thanks for the inspiring post!

My opinion is that monsters are smart enough to know when there's a big dangerous party and experienced parties are smart enough to know how to scare off minor creatures while traveling and so lesser monsters are less likely to step to a tough party and tougher ones might be hungry for treasure (intelligent) or confident of their ability to take out larger, louder prey (animal intelligence)

Not all encounters should be monsters

5. Wine has turned into vinegar

Yeah those are under civilians

Sorry that I'm late to the party... Is it still possible to buy a physical copy of Maze of the Blue Medusa?

if it doesn't work, email me: zakzsmith AT hawtmayle dawt calm