This will be my 15th post under this label:

So, one of the first people I'd never heard of to write a big post railing against me ("the Internet is screaming with the harm you caused" he said "What harm? Who is harmed?" I said "You know!" he said) was Sean Patrick Fannon. He eventually admitted to sexually harassing people.
Tyler Carpenter, an indie gamer who worked on Battletech, beloved by indie game community, and who also attacked me, admitted to sexually harassing people.
Elizabeth Sampat, another indie game darling attacked me for years, then admitted to enabling an abuser who also dated Zoe Quinn and then killed himself.
The moderators at RPGnet were also pretty early on in the hate train. Eventually an RPGnet mod, BlackHatMAtt, was accused of rape. His wife was accused of helping him cover it up (after she'd attacked me, of course).
The folks at Green Ronin games dogpiled into indie gamer hate threads about me and then, well guess what happened?
And we all know Adam Koebel of Dungeon World, who repeatedly harassed me ever since I played his game and didn't like it, was revealed as an abuser.
And now, this guy, Ben Chong: 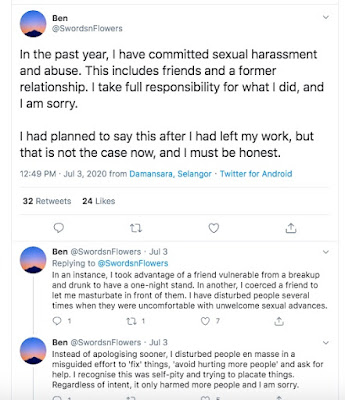 This dude, who I am not aware of ever having spoken to in my life, ran around tagging a message with Shoe Skogen's stupid #abuseisnotagame hashtag on every message from the witnesses who came out to  tell people the truth. He copy pasted the exact same text like six or seven times. Kimberly points out Mandy's not telling the truth, copy-paste, Frankie points out Mandy's not telling the truth, copy-paste. As always: he didn't engage, provide evidence, or seem to be able to even read what they were saying, just responded like a robot.
Everyone who cares by now has seen the thing where I ask for evidence of any of these peoples' claims against me and they don't have it, even for internet stuff. Everyone knows that people fell in line behind these claims because of instinct and "red flags".
Game community: your instincts suck.

People you think "seem safe" suck. It's almost as if the way to find the innocent person would be to look for the person who is always at odds with the endless, evasive, avoidant bullshit that let
...Adam Koebel
and Ben Chong
and Sean Patrick Fannon
AND Tyler Carpenter
and Elizabeth Sampat
and RPGnet
and Green Ronin...
...all slide for all these years.
The biggest red flag is when someone doesn't argue with you people.

Misinformation is not allowed on this page so your comment was erased.

For there to be "hype" to "fall for" would require dishonesty, and there wasn't any.

Well, I don't think hype is generally involving dishonesty. Some of it is advertising. To me, I don't consider MotBM to be "hyper-functional" as is, but I wouldn't call that a lie. There's a difference between say, UFC saying "THIS IS GOING TO BE THE BEST FIGHT IN MMA HISTORY" and UFC going "if you watch this match, you will literally and factually be cured of any back and knee problems and meet the true love of your life". Just like how "hyper-functional" comes off to me as ad copy and a statement like "this is literally the easiest dungeon to run in human history you can factually do ZERO prep and run it better than any other product in history" is probably dishonest.

Though this post doesn't really seem to feature any ad copy at all. So who knows.

The children have still not grown up.

I fail to see how any reasonable, self-respecting person can possible stay in reddit osr section after this.