I can't remember who wrote it, but there was a blogger post years ago about how every pre-modern weapon developed, from the dart to the bohemian ear-spoon, was developed for a reason. There weren't "good weapons" and "bad weapons"--they had niches they were meant to fill and they did. It's nice because it makes players think about what weapon they're using, and so think about the fight in more detail.

I used this idea a few times--in Demon City, for instance, because it's a game based on horror movies, nearly all weapons, whether a .45 or a flowerpot to the dome, do the same initial damage, but weapons that are better in a given situation vs whatever the other guy has get an advantage to hit.

Somebody recently commissioned me to write a "light and old-school but more tactical" D&D-variant and I used this same idea. The assumption in this game is all weapons do around d6 damage based on the user's class instead of damage by weapon type (in original Warhammer, damage is based on strength) but each has one or more simplified gamey rock-paper-scissors-style feature that make them better in certain situations. So instead of a flail making it easier to get past shields, a flail always ignores shields. 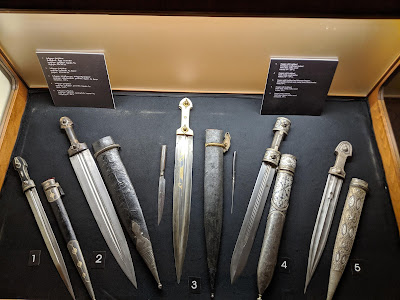 Some notes on these notes:

This game also includes a "block" option, which includes parrying or the like, so in games with no separate parrying step the rule would have to be slightly different.

If a weapon offers a bonus to block I'd usually just translate that into a +1 ac if the user is trained (aka a fighter).

Cestus: Bonus to hit and damage at hand range (up to arm's length). Minus to both any other time.

Chain: Ignores blocks and shields. Maximum 4 damage. Can be used to grab or grapple.

Club or Mace: Bonus to knock an enemy in heavy armor prone.

Dagger: Throwable. +2 to hit and damage if used in a melee sneak attack. Maximum 4 damage otherwise.

Garotte: Can only be used as a surprise or on a grappled enemy. Ignores armor. (Enemy must have a neck.)

Greatsword  Can’t be blocked by spears, staffs, pole-arms, can't be used in close-quarters. In a game without a block or parry I'd just make this work like the great axe.

Heavy pole-arms (halberd, pike, etc): Bonus to damage at spear range (10-12')  An extra block per round at spear range. Can’t be used in close quarters.

Net: No damage. A net can be thrown up to 30’ and acts much like a grab on the target’s legs and can be escaped using the same kind of rolls. If the attacker doesn’t hold onto the net (like, they’re killed that round, for example) it can be escaped in one round.

Sling: It's basically free and doesn't look like a weapon. Maximum 4 damage but can hit two adjacent opponents at once if you sling a handful of rocks.

Spears and tridents: Throwable. An extra block per round at spear range. Can’t be used in close quarters.

Staff: Doesn’t look like a weapon. An extra block per round at spear range. Maximum 4 damage. Can’t be used in close quarters.

Lance: Bonus to knock a mounted enemy prone. Minus to hit if not mounted.

Whip: Harmless against armor heavier than leather. Maximum 3 damage. Can be used to grab or grapple at a bonus.

-
-
-
To keep it light, I didn't go nuts with the different kinds of swords (sabres and scimitars supposedly being better from horseback, khopesh swords being better for hooking limbs, etc). Instead of damage. Wounded Y/N and then dead. Trait Stout gives the character a extra Wound.

There are magic items that can soak a wound.

This game is called Chronicles of the Outlands by Better Games

I find it to be one of the best systems for big groups.

Sounds nice and easy but what about the range? I dont really get it. Imagine like i am having a spear and some dude trying to attack me with a cestus. I am attacking him with my spear from spear range with a bonus and he acts next, so he is moving to a hand range and hits me with a cestus also with a bonus? Or is there some mechanics what prevents people to change their range so easy? I mean you definetly wouldn't like to hit a spearman or a swordsman with a cestus.

Depends on the game you're playing so I left it out for the purpose of this post.

A lot of times, yeah, two people can weave in an out and strike blows at their preferred range (not the end of the world), but at other times clever players are going to be able to limit the enemy's movement.

As I said, in games without a block this could be changed to a bonus to AC.

A nice time to have a cestus would be, for example, when someone's grabbed one of your arms.