I made my first by-the-book (ok, kinda by the the book, I rolled stats 3d6 in order just to see how that'd go) 5th Edition D&D character last night. Trullvenly the Slav, half-orc barbarian, noble background.

Thinking I might convert my current home game (AD&D/3.5 hacked mash-up) to a hacked version of 5e. Things to consider (and I freely admit I may not know what I'm talking about here, but that's why there's a comment box)...

-Conan can be easily charmed by a 1st level wizard
Unless your class specializes in a save, it doesn't improve as you level up.
Because of the nature of the format, this kind of thing actually happens a lot in serial fiction--the epic hero is laid low by a clever low-level loser who gets lucky. Because Thor's been around for 400 issues fighting epic threats and it's nice to have an ironic reversal once in a while.

-Robin Hood and Gandalf are equally likely to hit the bullseye (sorta)
Robin Hood will do more damage and probably get multiple attacks and Gandalf would have to use a light crossbow but if they're the same level all classes have the same chance to hit. Ok but then Robin Hood probably has a feat that makes him even better with bows and has a better dex. But still, it's a little bit of a thing.

-Gandalf should be using a staff, not a sword
…since one of the things left that separates the fighter from the wizard is the fighter's using better weapons, or at least the fighter gets to add a level-based bonus to a sword attack.
An easy hack around this is to just use class-based damage unless a weapon is specialized. Wizards=d4, Rogue/Druid=d6, Cleric=d8, Fighter/Ranger/Paladin=d10, Barbarian=d12

-I have no practical first-hand experience with the global effect of the spell system at high levels
…on the other hand, the same could be said for the current spell system I'm using, which is totally experimental.
Might let people grandfather-in old spells.

-Random unattached stuff I don't like/care about
This is a catch-all for stuff I can just ignore, so whatever. That's what I do with every other edition.

-Players have new shit to remember
Everybody gets abilities they didn't have before which they need to keep track of. Like my half-orc has the ability to pop up to 1 hp when he's knocked down to 0 hp because he's a half-orc.

-I have to rebalance monster hit points and weapon damage
I usually build monsters from scratch so this is no big deal.

This, by the way, is how I do it at high levels: I want a relatively high-armor, short-combat game.
The unit of damage is The Fireball (an unavoided, average-damage fireball from a caster at 10th level. That's 35 points of damage in D&D Type III or D&D Type V if the caster uses a highest-slot fireball).
A backstab should be roughly equal to a Fireball.
An average successful melee attack from a 6th level fighter should be 1/2 fireball. So if both attacks from a high-level fighter hit, that guy might as well have just gotten fireballed.
A 10th-level fighter-type monster should have about 2 fireballs worth of hit points.
-
-
-
To see how it'd work, I converted Connie's character over to the new system. 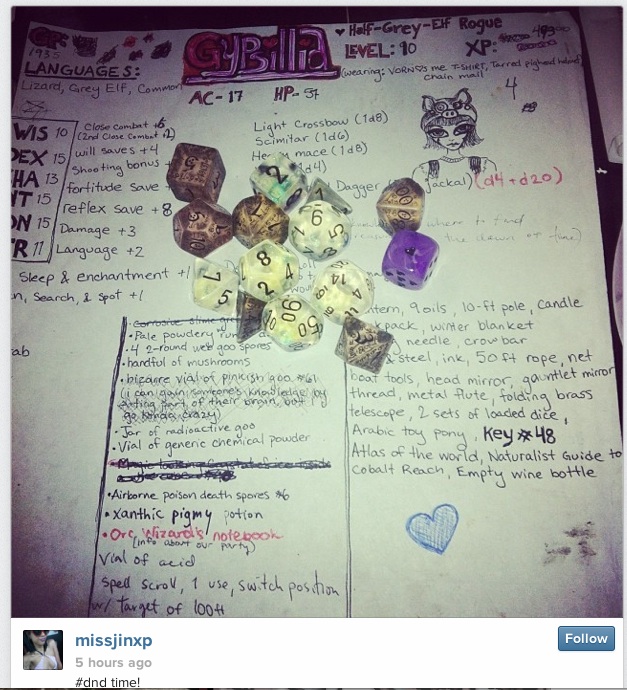 It took about an hour of working together and wasn't totally boring. Trying to retroactively decide what background and archetype you have is a thing.
Asterisks indicate things Connie's going to have to learn how they work.

Notes:
Reliable talent plus existing bonuses means a thing has to be like 22 difficult before our thief even has a fail at her specialties.
Gypsillia is about a fireball and a half worth of hit points tough but uncanny dodge takes a huge bite out of that. So did the old version of Improved Uncanny Dodge.
Gypsillia is a little better at animal handling and a little worse at forgery than the previous version
She can't really climb anymore because she didn't go for athletics and chose the assassin archetype instead of thief
She's averaging something like 7.5hp (a little over 1/5 fireball) on a successful hit, but will be doing more than fireball damage on a backstab thanks to sneak attack plus the Assassinate ability. Without that assassinate ability, she's quickly outstripped by any high-slot fireballs.
I currently add the d20 roll to the damage for every non-spellcasting class, as a Fireball-offset. It adds 10.5hp to every damage roll. I may just keep doing that.

"Because of the urchin thing I now have the song from Aladdin stuck in my head"
"That's another emergent effect of switching over to the new system. I'll have to note that on the blog."
-
-
-

I'm glad the Alladin thing wasn't just my playgroup. For us it was triggered by the Noble background, so probably a different song. This may merit further research.

You might want to double-check that Type V Fireball. By my count a 10th level Wizard casting Fireball does 28 damage on average. Casting it as a 5th level spell bumps it up to 35, but hopefully that's the exception, not the norm.

That makes sense. More-or-less in keeping with how fireballs worked in previous revisions of the main rules.

What is your hit point hack?

The only thing I wish I could figure out how to fairly hack is A) Wizards never running out of cantrips and B) Druids getting to shapeshift so damn early. None of this is for balance reasons but for thematic reasons and the style/tone of game I like to play. I'm a fan of the wizard having to rely on a xbow or staff if they run out of magic power for the day and I feel like a Druid shapeshifting should be a HUGE deal, something they spend massive amounts of time and training to learn how to do, not something you do a 2nd level.

Any quick ideas for those?

i never used cantrips to begin with.
Druid shapeshifting's not a thing for us because we're already in a high level game, so it's a done deal.
If I was you, I'd…hmmm…make transformation a spell? Then it ceases to be a spell at whatever level you think is appropriate. Plus give the druid a simple offset of your choice.

Hey that's a pretty good idea. Thanks. Do you use anything in place of cantrips or do you just count them as 0 level spells which can run out like in 3e?

I've always left out cantrips and 0 levels entirely in my home game. Domain spells too.

If you really like your cantrips, one way is the old Unearthed Arcana (1e, not 2e) way. They're there and a character can memorize 4 at the cost of one 1st level slot. But once used they're gone.

See, thing is I already leveled up and wrote down "Limited Wish" in my spells. Furthermore I cast it and wished that I'd continue to have Limited Wish in 5e.

Cantrips are a super easy hack.

A) As Zak said, just remove cantrips entirely.
B) Remove cantrips and change them all to level 1 spells.
C) Put a hard cap on number of cantrips cast per day (4 is a good number, or you can make it scale with 1st level spell progression.

As for druids, wild shape is a huge part of their power, but if you really want to, you can just delay it by a level or two.

Alternatively, you could restrict druid wild shape to one shape at 2nd level, and then grant additional shapes at other levels (or through training). Pathfinder, for example, grants wild shape at level 4.

I threw a 5th edition pregen character into one of my campaigns along with characters from other systems. I took the advantage/disadvantage roll innovation years ago. other than that, all the systems are the same, aren't they?
convert to V? I don't actually even understand what that means. it would be the exact same game I run now. by the time you get done hacking it, won't you be running the same game too?

It's not whether you hack, it's how much you have to hack through, and from what direction.

I guess, if I could reframe the question. What is the goal of hacking V? just fun? because I believe in that too. hacking is fun.

Is your hacking of V an experiment or test?
Are you test driving it?
isn't V exclusively for new gamers? are you test-hacking it on their behalf?

Why am I hacking it?
I want to use it.
It's really good.

For the charmed Conan thing, fighters get Indomitable at 9th, 13th and 17th reroll which helps them with saves.

And also as their ability scores go up so do their saves.