Space Marines Are The Opposite of Hello Kitty

(or A Biological Homage To Space Marines)

Tom Middenmurk and False Patrick and I were talking about the design of Space Marine miniatures...

I think the key thing about space marines is not simply masculine signifiers (which all kinds of different designs could be said to have in different ways) but the idea of movement as masculinized and, much more importantly Adultified. The emphasis is not on muscles and how muscles move but on the transition between (often muscled) shapes met at joints. 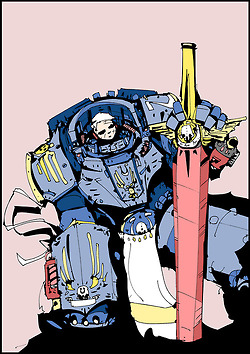 Compare, for example, a Warhammer troll to The Hulk… 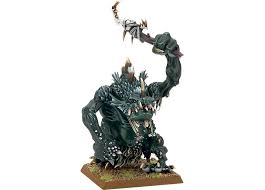 The troll has far more distension at the limbs, because the idea is we have to imagine, with this tiny miniature, how one muscle would move against the next. Imagine strapping pencils to your fingertips--suddenly each movement of your hand is more dramatic. The marine has the same principle: compare the marine to the storm trooper--the shoulder pads don't just make the guys big they theatricalize every arm movement--those pads would move when the guy did anything: reach for a grenade, open a pack, even walk. 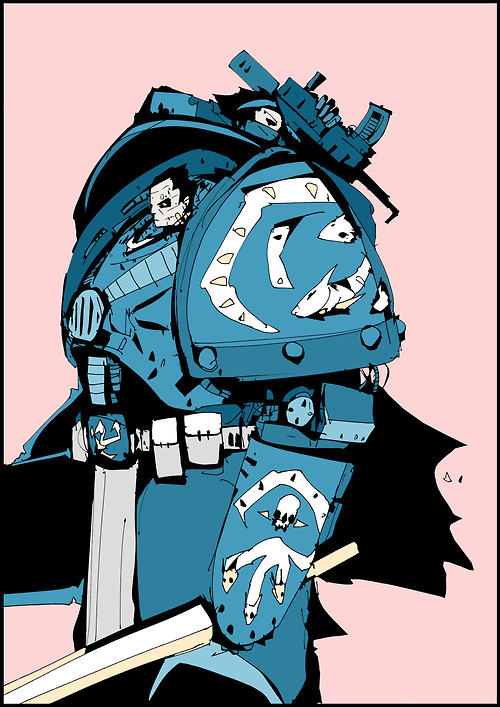 The pre-eminent real-life example here would be the silverback gorilla. Hulking, hunched, utilitarian but also a display of utilitarianness. The gorilla squats like a parked truck. Potential energy. Mass waiting for something to be massive at.
Look at all the parts that are less important in the marine than in a normal figure: the neck, the chest, the crotch, the thighs. These areas are the transition areas--socket areas. They aren't the parts that do things out in the world. 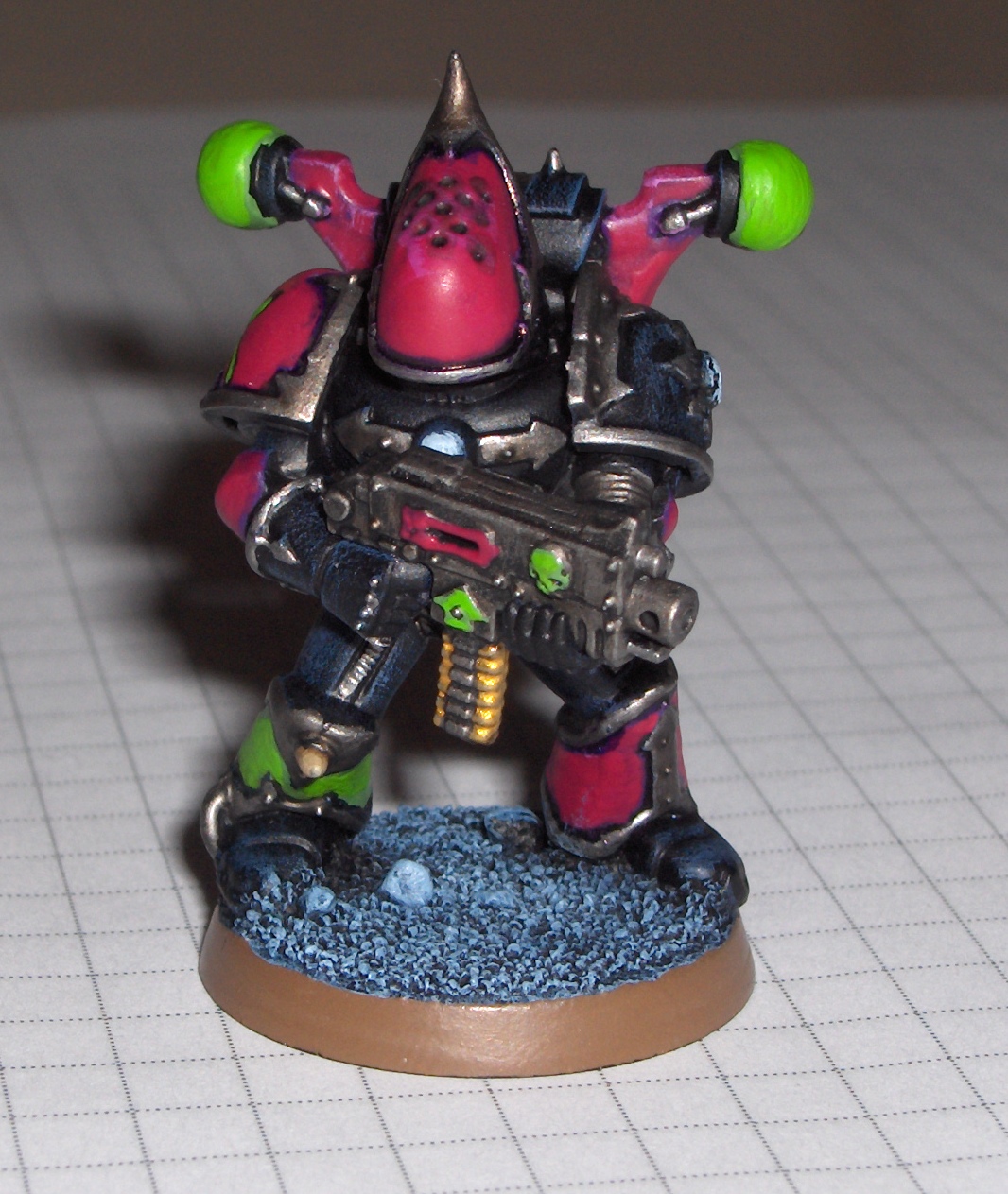 And the medieval aesthetic is an important component of this: medieval european armor does not (unlike the samurai's skirted armor and ballooning pants) hide movement, it dramatizes it, it is, in many senses an exo--skeleton--the strangeness of the skeleton re-iterated inside out--to emphasize each gorillaish gesture. 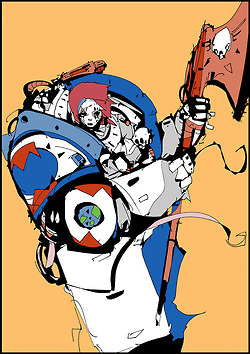 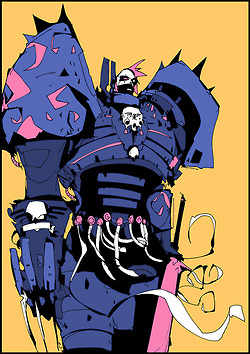 I find it, in general, helpful to try to think of the opposite of what I'm thinking of. What's the opposite of the Marine's movement? Hello Kitty's movement. Her head is huge, her limbs are underdetailed and basically afterthoughts. 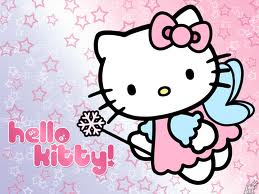 Her movement is implausible and underexaggerated--it's hard to picture those limbs doing most things limbs do (to see what distortions have to be done in order to put that anatomy into action, look at Vince on Rex the Runt).
Her face expresses something but, more importantly, is just hugely a face. Like a road sign "I am a living organism, feel for me". Whereas, of course the marine's head, even when revealed, is tiny--consciousness and life are the marine's control center: interior, not to be advertised.
What is her aspect? Not just feminine, (and barely feminine) but, more importantly, babyish and neonate. Tom no doubt knows (see "A Biological Homage to Mickey Mouse") that "cuteness" is basically about helplessness  not femininity per se . So the Marine is less hypermasculine as hyperadult  hyper utilitarian hyper self-reliant hyper- moving hyper verb (and hyper male adult only secondarily)  . What would hyperfemale adult look like? ... 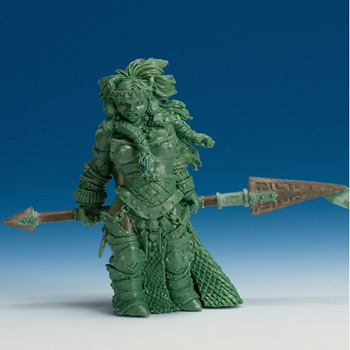 -
-
These extremes do not go unnoticed and, as usual, the idea of reconciling them is too delicious, aesthetically, for some to resist: 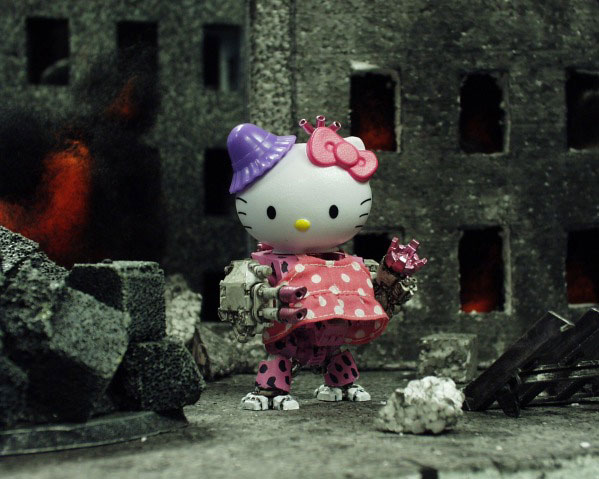 Neoteny is what that trait is called. The retention of juvenile/infantile traits. Mickey and Hello Kitty certainly have it.

Zak how would you fit the following in this frame:
1) mecha
2) anime females in unreasonable armor (say, Queen's Blade)
3) the hyperstylized armor of Wayne Reynolds & imitators

Super interesting. The 'Yellow Kitty' marine in the 2nd-last pic reminds me of Rupert Bear - which I suppose is a sort of half-way critter in your scheme: something cute that goes on adventures.

Maybe more of a wild-woman archetype than hyperfemale, the barbarians of Rebecca Dart's Battle Kittens came to mind. Rubenesque and comfortable in the presence of blood.

Hi, I enjoy reading your site! Is it okay if you consider linking to my website on your page? Please email me back.

I can think of Ripley in the Power Loader from 'Aliens.' Every movement exaggerated, full of destructive force. I can easily see a Space Marine having the same effect, just with smoother motion. Think it would be tough for a Space Marine to learn proper control, so he isn't crushing everything he touches?