The G's in the Folio are really really depressing. The ideas are bad, the names are worse...oh I need a doctor...not even "flumph" funnybad but more like "oh-I-don't-remember-that-one-huh-oh-well-go-back-to-my-knitting" bad but, hey, we're making lemonade here. (clicking these will generally enlarge them far beyond the original size they were drawn at.)

The Galltrit is a little generic gremlin that flies up to you, drains your blood, and flies away, often undetected. It's just a very dull form of GM fiat with stats. I re-did it as this guy who creates an artificial center of gravity (kinda strong) in the room and is called a Gauntlet. It usually appears in the midst of other monsters and is fairly inactive, but any hit not directed at it is likely to get pulled toward it slightly and therefore miss. Missiles at -6, melee at -4, dropped items always hit the Gauntlet (who usually then eats them). 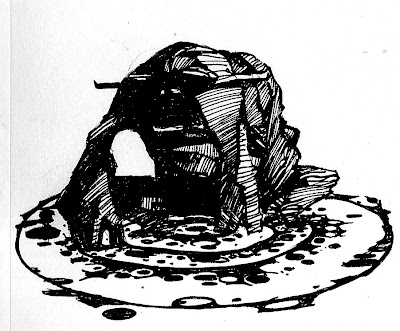 Oh, the Gambado...shoot me and eat my eyes, it's so lame. And the name is lame. It's a skull that's actually a springy jack-in-the-box only no box just the ground. It's so fucked. I re-did it as a thing called an Inhabiter, it's a small demon with oracular abilities and hermit-crab-like habits only instead of using shells it uses heads. 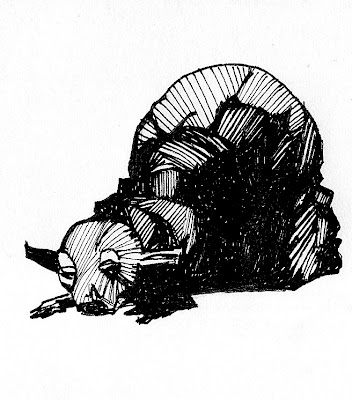 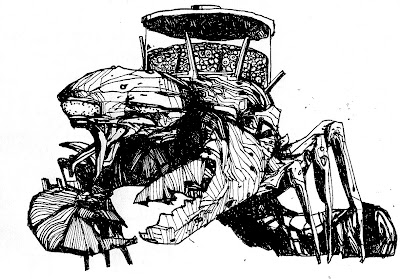 It is now called a Gurgler and it's a foot long and it's like a little Igor and it helps evil wizards and alchemists carry out experiments by like taking measurements and handing them shit. "Clawing" I guess. Its unique attack is if you put a substance into the glass jar fused to its back then its saliva can replicate the effects of said substance.
Giant, Fog and Giant, Mountain are lazy re-treads of the already-suspicious Giant, Cloud and Giant, Hill, respectively. A giant is a giant, ok? That's pretty exciting right there. If you want to get fancy with the concept you need to do a lot better than say "And it lives in Colorado!" 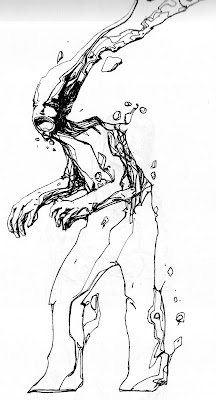 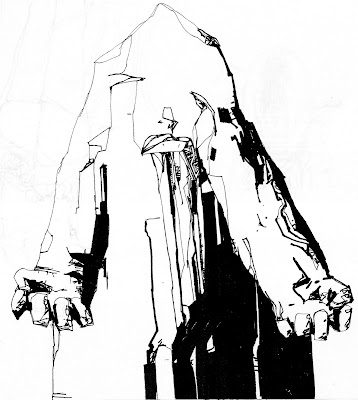 I'll be the first to admit the Mountain Giant looks like a big Galeb Duhr but there's only so much that can be done with these "G" Fiends.

Giant strider. Stop me if you've heard this one before: Fire-breathing repti...oh, you have. Ok, new giant strider:

Gibberling these are like some grubby humanoids with some hit dice and stuff. They make some noises, I guess, which is supposed to make me forget I need more gross subhumans with clubs like I need a hole in my...AAAAH! I'm doing it too, the cliches the CLICHES!!!! fuck. My brain. Ok, calm...The Gibberling is now this: 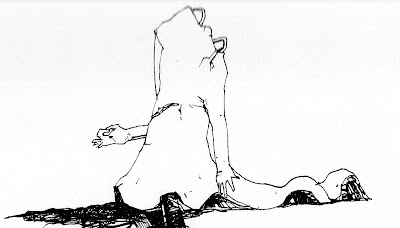 It is an intelligent relative of the Shrieker, it speaks most local languages, is saprophytic and telepathic. It reads the PCs thought and--rather than shrieking--simply tells passing monsters everything it knows about the PCs so that they'll kill them and the gibberling can eat their rotting flesh. Occasionally a gibberling can be convinced by PCs to give them info on monsters so, y'know, vice versa...

Githyanki. I am so happy there's a semi-decent monster here I'm gonna not talk about how lame some of the mechanics associated with them are... 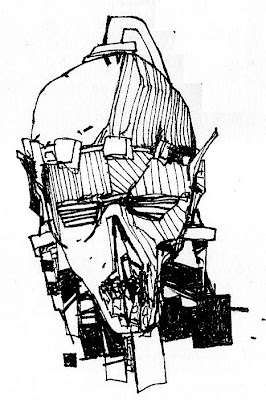 Their less-interesting-cousins the Githzerai need a redesign. They're supposed to be kind of like monks, ok... 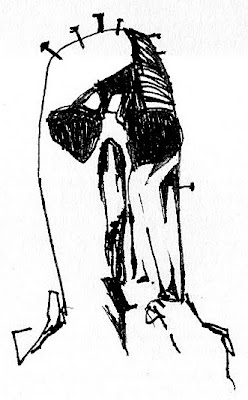 The goldbug is a poison bug that looks like a coin. Let's make it a bug that eats coins..

...or we could make a version of it that's inspired by the Edgar Allen Poe story and make it a bug that's really fucking racist.

Gorbel. Fuck. Fuuuuck. Jesus fucking fuck on a fuck. It grabs and won't let you go. Also, it is a sphere. With 3 eyestalks. And little grabby claws. How I yearn for the green grass of home...What am I on about? That made as little sense as this monster. Ok. It's now a Grasping One and it does the same thing--grabs and won't let go, only it does so over your face. And it has a face: 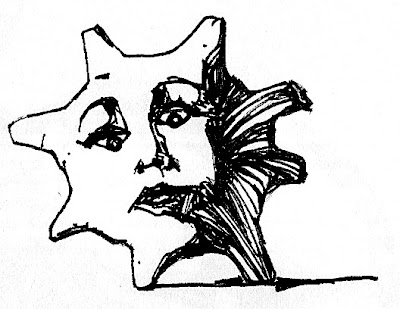 Gorillabear. I lack the energies of disgust the gorillabear deserves here. I'm calling it Grendel and redrawing it slightly and moving on... 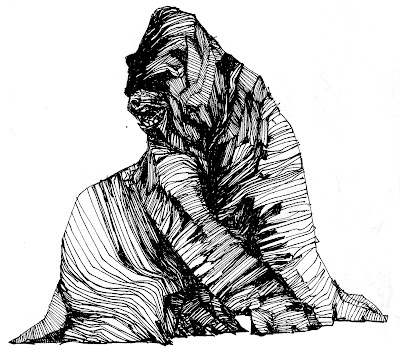 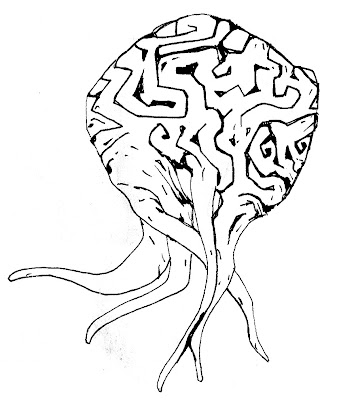 Now the Grimlock. The original grimlocks were indistinguishable from gibberlings only quieter and blind. They should never have been invented. However, the word "grimlock" is good. Here's a new one: 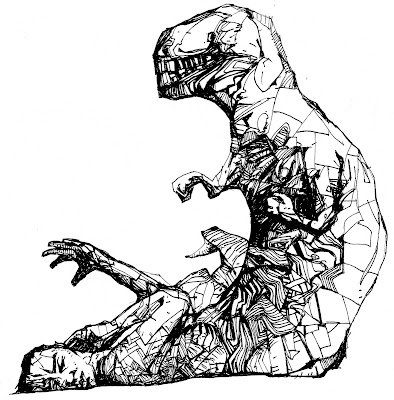 The original Gryph is just a crow with a lot of legs with a laying-eggs-in-you trick stolen from Alien and the giant bluebottle fly in this very folio. Reeeeeplaced: 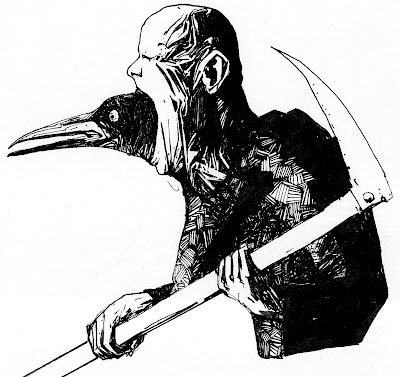 It's hard to argue with the concept of Guardian Demon though the mechanics they give it are some dumb fire powers. Here's a new picture, the rest I bet you can handle. It asks riddles or curses you or makes your entrails try to crawl out of your nose or something: 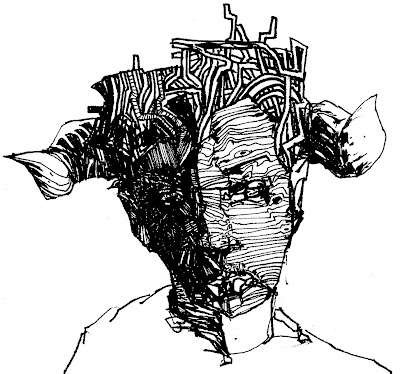 Last up we got the Guardian Familiar which (good news) is a cat with nine lives, each a hit die scarier than the last, but which (bad news) is just a cat, really. I decided that each cat is inside one of those Russian dolls and inside each cat is another Russian doll with another cat in it. 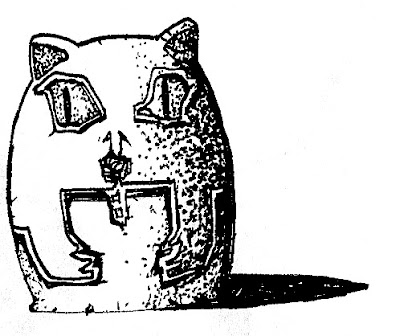 Is your Grimlock a visual Transformers reference, or is the half-human-half-T-Rex thing just a big coincidence?

The G's were awful, and I think you've done well to redeem them here. Also, I have learned a new word as a result of this post.

Congratulations. I have readen many of your entries, and I must say that blogs with people like you and your friends can change peoples prejudices.

Maneki neko matrioshka! Maybe witches give them to their kidnapped surrogate children to keep evil other than the witch away. Maybe in this way
they soak up so much evil that hey exude bad luck to all around them like a jinx, and eventually the little witch children have to send them off on missions to collect the eyes of blessed orphans just to get them out of the house for a while.

I totally adore the new gibberling. And it's a great way to screw with the PCs, either by telling lies OR using "out-of-character" knowledge.

"That's 'Fingers' McElroy. When he's on watch, he steals from the other sleeping party members. He can't believe how stupid they are to trust him...."

"That's Dargrim The Mighty, who doesn't want anyone to know that he's been replaced by a doppelganger..."

Love the Gryph and Guardian Familiar is just awesome.

Good stuff here! I like the new Garbug, the whole wizard helper thing is good, and the potion jar is a neat mechanic.

For the Gorbel, I'm envisioning them actually covering over a player's face completely and taking over the face (they give the player a breathe without air ability). Then the Gorbel turns out to be really smart and a great conversationalist so none of the other party members want to get rid of it.

The Gryph is a pretty awesome picture.

I like the Guardian Familiar. Maybe as they get older and more powerful they grow more "selves"? If you cut it open and count the rings you can tell how old it is. The most powerful are the ones with nine lives (like nine-tailed foxes).

Grells really made it into my "cool book" when someone decided that they have tube-shaped lightning guns. OH WEIRD 60S SCI-FI GUYS OOOOOOH OKAY. Got it.

Believe it or not (and sadly I forget my original source to prove this since it was so long ago that I found it), the Gambado is possibly a poor translation of the 'Gumbadu' (Pronounced Gum-BAH-Doo), a shadowy, wraith-like spirit that can stretch across great distances to grab you but can never leave the place where its bones are buried.

I think it originates from the folklore of France or Normandy but again I forget.

"Jesus fucking fuck on a fuck" has just become my newest favorite turn-of-phrase.

When I saw your new Gryph, my first thought was having one of my players grapple with what they thought was a creepy peasant and then the fucking giant crow face shoots out and tries to take an eyeball!

Oy Zak - I wanna talk to you about something. Do you have an email or something I can use?

ok, shane, it's like a puzzle dungeon. if you have the google skills necessary to find my contact info, you will be judged worthy. if not, oh well.

I actually like the original grell, but yeah, those G's do suck. Love the drawings.

So... the face on the Giant Strider? Were you happening to be looking at a certain some one? Or am I imagining things?

Anyway, keep up the great work.

I've always felt that the Gith races had a lot of potential and could use substantially more development than they got in sourcebooks. There's a Githyanki on the cover of the Fiend Folio. It feels like there should be a lot more mythology out there. I'm sure it's cool for a DM to make up whatever they want, but even as a blank slate, we get "New drawing, moving on" here.

Like I said back when I did the "alphabetical monster thing" (click over there on the right) I feel like everything you need to know about the Gith is expressed on the cover of the Iron Maiden album cover "Power Slave".

Heh... yep the Fiend Folio is a deposit for some truly horrible monsters. However, I do think the Gibberlings (even if the name is dumb) can be used if you alter them a bit. I have a tendency to pattern them after the degenerate clan from H.P. Lovecraft's story 'The Lurking Fear'. My players have come to both fear them and be highly disturbed by them.