Today we'll start with a pair of Something Awful goons that have somehow ended up in the same community they started their online careers helping to harass: Erika Muse and Nickoten.

This is the simple version of what I found out about them over the last three years, if you want more details: vote here.

Since February 2019, I will take any opportunity to talk to any lawyer, especially in person--former judge, current DA, public defender, divorce lawyer, patent lawyer, someone on the side of a bus, whatever. I buy them lunch and ask them questions.

Lawyers--to a one--have never seen anything quite like gamers online. They are confused by this behavior. They are mystified in a near-literal sense: as if they are in the presence of a phenomenon not explicable to mortal reason, to ideas not native to the sublunary plane. Why would anyone do these things?

To put it bluntly, lawyers are used to a world where people:

Not one where they:

This happens in movies, a lawyer will tell you, not real life.

In Australia, I had to explain Ettin to the lawyers over and over. They would be about to file the paperwork, get it wrong, I would have to correct them, then they'd have to re-edit it, and there would be another mistake.

What they didn't get was how little work they needed to do--how little they had to argue or conjecture--the dude had left a paper trail of admitting he did it a mile wide.

"I mean this is a conclusion you've drawn? He didn't say that..."

Goons exhaust the understanding of lawyers, to grasp this shit, you need doctors.

"I don't agree with me but you have to"

Here is one that's really hard to explain:

All of this harassment started because of my opposition to a pair of conservative positions that the majority of people harassing us no longer hold or defend.

The first position I opposed was:

Sexy things in RPGs are either the result of-, or the cause of-, men being bad.

Almost nobody now publicly holds this position because a lot of LGBTQ activists got sick of pretending they don't fuck or don't want to look hot a few years ago. We'll talk more about why later maybe but it's not important today.

The second position I opposed was:

The only reason to play or be interested in an old edition of Dungeons and Dragons was nostalgia or because you have serious personality flaws (racism, sexism, homophobia etc).

Almost nobody now publicly holds this position because a bunch of loud, creative aggressive and aggressively diverse Old School fans and creators repeatedly finally got recognized for existing.

At some point the indie gamers developed enough sense of shame to grasp that it was embarrassing to try to tell Scrap Princess or Fiona Geist that homebrewed old-school D&D games were inherently transphobic or to try to tell Zedeck Siew or Ramanan Sivanjaran that playing D&D was inherently colonialist.

Here are some interactions with Erika from the early years of the harassment campaign:

I asked her why she'd believe I abused anyone online despite there being no proof, she said she believed anyone who is "less privileged" in any dispute.

There are lots of obvious flaws in this system. For example, my ex- Michelle, a major witness in the current cases who says the claims against me are bullshit, is a black woman, and so less privileged than Erika's Something Awful friends. So that's a checkmate. 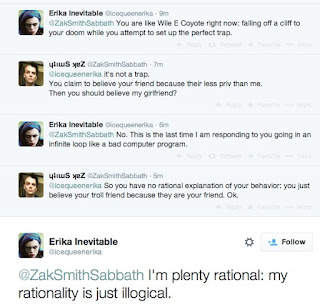 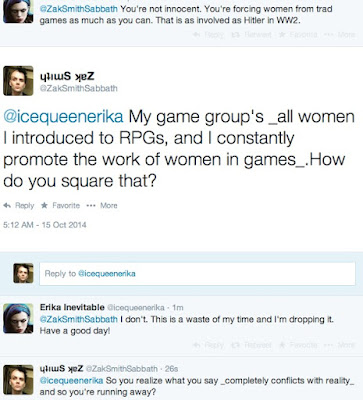 And some more recent reality problems from Erika: 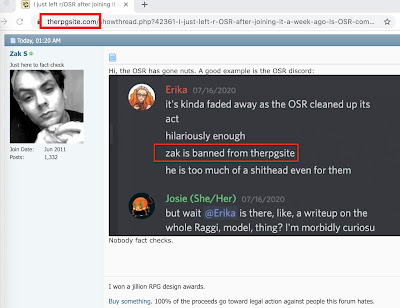 So let's review what we just saw:
And there's way more than this. Erika's not well.
A therapist took a look at Erika's recorded online behavior, here is what that therapist said, verbatim:

Erika's interactions are concerning—there are behaviors here consistent with Cluster A personality disorder symptoms in the DSM*, including (and these are direct quotes):

-suspects, without sufficient basis, that others are exploiting, harming, or deceiving her;

-quick to react angrily or to counterattack;

If she doesn't actually believe the things she's saying that's also concerning and suggests Cluster B traits, like Antisocial PD**. 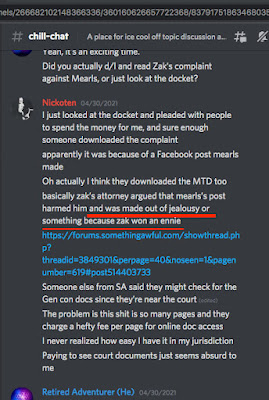 Obviously nowhere in my court documents does it say I think anyone wrote their smear posts about me out of jealousy about awards or anything else--especially not a guy like former D&D head Mike Mearls who has won more game awards than I ever will. Again, the papers are real easy to check.

So this means, either:

Again, Nickoten is not well and not responsible, and admits it:

This is the therapist again, talking about Nickoten's online activity, verbatim:

Again these are also concerning, and we are in the realm of Cluster B traits and Antisocial PD--its characterized by consistent disregard for the rights of others and an apparent willingness to engage in untruthful, deceitful and manipulative actions.

Now you might be thinking that this OSR discord place sounds like a glorified 4chan if they're letting goons post there so it's no surprise that they haven't done anything but, no, actually, the OSR discord purports to be a friendly, hugboxy space that is concerned for its users' mental health--it has a mutual aid channel, the rules reference personal boundaries and cultural differences, and, at least during the founder, Chris McDowall's reign, the community wrote out explicit principles about being "a kind place" and about mutual respect and taking care of people.

This is why it's extra disturbing to see this. Nickoten and Erika (and other users on the site who emulate them) need help. But instead of moderators or their friends on the site talking to them and trying to get them off the site and into therapy--or at least to access some kind of other mental health resource--until they can address their problems, the other people just amplify their claims.

I don't have any illusions that the people on the site care enough about them to do that, but it would at least be nice if they admitted they don't, so that people that do know goons might start to realize they themselves have to step in, because the online communities won't.

Obviously neither of these two trust me, but with any luck they might trust someone who read this.

Nickoten and Erika are goons that the community can directly and relatively easily do something to help (though they probably won't), next time we'll look at some tougher nuts to crack.

Email ThisBlogThis!Share to TwitterShare to FacebookShare to Pinterest
Labels: Goons, People Who Harassed Us Shockingly Revealed To Be Not What They Seem Yet Again

I've got a medical education but I, too, am still surprised by all this.

Great and useful context, especially because I have directly interacted with some of these people, and I have no doubt that I will eventually again.
For now, thanks for the details!

I've worked in mental health settings with many people suffering from various kinds of mental illness. I would never pretend to know anyone's appropriate diagnosis (or lack thereof) on the basis of internet postings. But these people do seem to engage in disordered thinking and abusive behavior. Especially if their behavior IRL mirrors how they behave online, then they do need professional help.

People in any community tend to avoid conflict and pretend that this kind of behavior is just quirky, especially when it doesn't directly affect them or their friends. It's much easier to take the path of least resistance and let each instance slide. People like this are attracted to communities abuse is tolerated under the guise of acceptance.

Thank you for sharing all this, would love to see more!