Patrick Stuart, Maze First Draft, and the Tale of Helboria

Fans of Maze of the Blue Medusa will probably remember Lady Crucem Capelli, who appears just after you enter the painting: 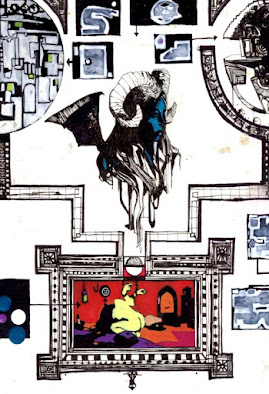 You might also remember the way that the Maze was written was:

1-I drew the whole Maze

2-Patrick wrote what he thought was in the rooms

Patrick's first take on this blue devil-girl was a kind of millennial Elvira:

In the centre of an expansive, yet tatty boudoir, a goth fetish goddess reclines on a black leather couch. As you enter she looks up in surprise, quickly stuffs the crackling packet of a crunchy snack between the sofa cushions and stands up. Chews. Makes the ‘hold on’ sign. Chews more. Swallows, then spread her arms and says

5’9 with wicked ramshorns and little batwings which she will point out to you as being “fucking cool, right?” Helboria has remembered her makeup but forgotten (or not bothered to) brush her hair. The nails on each hand are painted in random individual colours. Nails on the left hand are cracked from casual biting. The straps on her left shoe are undone, leading you to think she is about to become dangerously unbalanced and fall, this never happens. Her PVC fetish dress has forgotten crumbs in the folds. There is a dot of lipstick on one of her upper front teeth. Her breath smells slightly, but not unpleasantly, of cheese and onion. She must be a Succubus as nothing human could stand in those heels. (On examining feet will save to avoid contracting mild shoe fetish)

As a Succubus Helborias job is essentially to be evil. As she is kind of a lazy, flakey slacker, this makes her quite likeable. She will make some attempt to seduce the PC’s, this involves her raising one eyebrow, nudging them and making arch comments. She acts like a cross between a comedy transvestite and a carnival barker. In event that any PC falls for her charms “We’ll have to do it here though, there’s no bathroom, you ok with that?”. The leather couch has numerous packets hidden in it and crackles when in use.

She casts spells by pointing her hands at the target, wiggling her fingers and going “KAZAM!”

Helboria has forgotten exactly why she was placed here. “Maybe to stop people getting in? Or out? Or to make sure people do go in? Or get something? Or not get it?” She has only the vaguest notion of what is inside “like an evil old woman or something? A crone? Oh yeah a Medusa obviously so probably that then” and will alternately threaten/promise things that adventurers would fear/desire. “There’s shit worth money in there. If you see anything important totally grab it dude.”

If Helboria is consistently reminded of the likelihood that she is meant to be guarding the place she may try to fight the PC’s. She is easily charmed, her standards are low.

If asked about the woman in the first room she may say “oh yeah, you defeated the evil Ashen Chan.. oh shit you let her go? That’s pretty wild man, how are you getting out?”

So I wrote:
"Oh Helboria. I follow her on Twitter. And that's the problem.
I feel all NPCs have a kind of entropy of self-awareness and dream-breaking-- they all tend toward Helborism at the table whether or not they are meant to (as monsters tend toward deadness and puzzles tend toward solvedness).
So the trick is to write the NPCs as po-faced as possible so that they slide into a pleasant groove somewhere in the middle negotiated by the GM. That is: the party is funny, the game's job is to be more serious than them.
Also, tactically, if you look at succubus powers (which tend toward deception and quick assassination) she's kind of a tactical waste, as written here, especially if she's not terribly persistent.
"HOWEVER: she's interesting on the page, in details. I think there's probably a sly happy medium."
So then we got the classic LCC:

In the centre of an empty room, latticed with shadow, stands a woman. Her skin glows midnight blue under the bars of shade. She walks deliberately back and forth, weaving through the threads of silhouette. Pauses, looks down at her feet, arms crossed across her chest.

“It would be a shame” she mutters to herself “to burn it all, with nothing left behind”.

Lady Capilli is a Deep Dragon in human form. She has accepted a request from hell. Her mission; to rescue a Daemon from inside a box.  Psathyrella’s father. (See Prince Sheklesh, upper right).

She is also a highly refined aesthete and connoisseur with a taste for strangeness and original beauty.  She regards the maze, its contents and the relationships inside it as a kind of work of art.

Her work will be destructive. She wants to put it off. To save whatever fragments she can. Invading the maze would mean destroying it. But… If she could find someone small, and insignificant, to wander round, collecting things and bringing them to her..

Lady Capelli’s first offer will be to buy from you, anything you bring back from the maze. She stores her purchases in a portable hole. She pays well in gems and gold. After the first transaction, roll 2d4 on the below table.

(I think I also nixed the portable hole? Standard D&D item and solves too many fun problems in a dull way.)

No doubt Something Awful /tg is scrambling to form a contrarian Free Helboria fanclub as we speak and all the members will go on to be very good at making games and not ever be taken to court for being idiots.

Email ThisBlogThis!Share to TwitterShare to FacebookShare to Pinterest
Labels: about books

I searched but was unable to find anything conclusive. Could you kindly explain what "helborism" and "helboria" are?

@cjgeringer
its nothing, just a thing.

patrick may have been influenced by the word “hellebor” which is an abortifacient herb.

I once had this player that had a habit of saying " To hell with that or this." One fine game session I had this brilliant idea of when the player said to hell. Well things went there in game. Till one fine game session the Army of Hell now mostly equipped with items that where graciously sent / donate there attacked the PC's World.

A little history of Hel from Bok Saga

So if I'm reading this right, too much self-awareness in the NPCs is a bad thing?

@kyle t
Not exactly, but it is a meter/dial to keep an eye on. Case the NPC is very important they show up very early in the adventure they are very clearly drawn day there a loadbearing pillar do you want to be careful.

Stop bullying Patrick. Go fuck yourself. I'm sorry I ever supported you.

Bullying is a serious accusation.

I’ve allowed you to publish it so it can be addressed—accusations must always be addressed and investigated.

So, here is your opportunity, Blergman present your evidence that I have bullied Patrick.

I met him once, at Gen Con in 2017 and we got along very well. Other than that our interactions have been entirely on the Internet therefore you must have a link or a screenshot of this alleged bullying.