Why are these notebooks so elaborate?

I get that question a lot now that the Cube World pdfs are coming out and people can see what my notes look like. 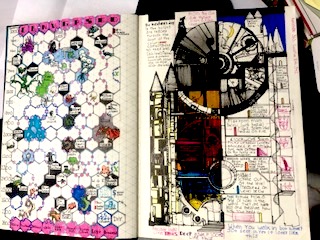 Part of the answer is that while I'm trying to think up an adventure I sit and draw. So while, yeah, I maybe didn't need to have every single hair on the giant baboon's body picked out like that just to remember there was a giant baboon when I use that page to run a game, I did have to spend some time figuring out who the baboon was, why he was there, etc and all that came up while drawing him. 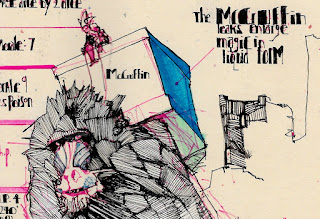 The other part of the answer is basically because of what happened the first time I did a published RPG book, Vornheim: 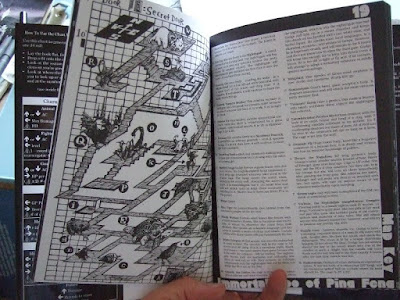 In 2011 or whatever, I got it in the mail and then I felt so relaxed any time I was running a game and the party wandered into Vornheim, because, hey, it was all there. Y'know, organized. Map, monsters, notes, sorted: cool.
I mean I don't remember half of this stuff any more than anyone else does, having it in my face and having each spread look different genuinely saved me time in the long run. So I thought: Ok, why not do all these notes like that? Make everything like that or like the One Page Dungeon Contest.
And it worked, this week's game I had to level someone up (so I pulled out the player's handbook) and the players bought some books (so I pulled out the treasure table) but otherwise I ran the whole game off information in about 4 square inches of notebook.
So, yeah, now that the notebooks are being published: I wasted time so you don't have to.
Two new Cube Worlds are out, 5 bucks each, they're both batches of semi-self-contained scenarios set all over the world, and again most of them were going to be in Lamentations of the Flame Princess' cancelled Violence in the Nympharium.
Cube World 16 is The Sorcerer, The Disintegrator, and The Giant Baboon (thus the baboon) and Cube World 17 is A Legion, A Dimension, A Cave, A Tower (the hydra is guarding the tower, which only exists at night).
You can check them out here. 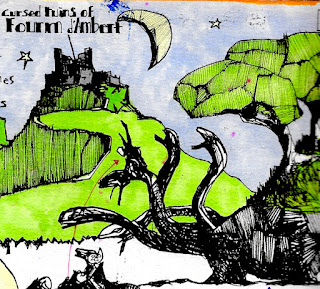 How much time does it take you to create a single page of your notebook? All of them seem to be quite detailed and intricate, I imagine it takes a lot of time!

Probably a day per page, altogether, on average

Follow up question haha, which pens/colors do you use? Curious about the colors especially since they are so vivid.

For fine work I use pigma microns:

The smallest is the .005, I have them in black, pink (for notes and preliminary sketches), then a rainbow of other secondary colors just in case I need to match the background.

The bright pink is often that.

The larger areas of color are either Copic Sketch markers, which are allegedly the ones anime people use. That's most of the light colors (that grassy green, moon yellow, orange, light blue, etc).

The deeper bleedier colors are sharpies -- i bought a Sharpie "electro pop" 24 pack because they were the only markers I could get when the virus started.

Hey Zak!
Sorry to bother you, I know you probably get this question like twice a day... I read on LotFP's blog that the printing rights for A Red and Pleasant Land came back to you... is that true? Are you considering getting it back to print? I'd love to get a copy!
Anyhow, have a nice day!

Never apologize for asking questions or hesitate. The only reasonable purpose of having comments is so that you can interact with what's here.

I have the rights to Red & Pleasant Land.

If you go and post a lot on an rpg forum about work that I've done that you like and how much you like it then I (or another publisher) might republish it, if you don't, then I won't.

It's that simple: it's all on you.

I guess – I hope – I don't judge myself "smart" or "to own superior knowledge" only because I am French. Don't loose yourself with xenophobia and national clichés.
But that's true: I discovered the secret of Brocéliande, the mysterious french country without cheese of their own. How do you know I did that?!
Best regards (and excuse my English).

Anyone who reads 2 languages is supérieure to me, at least in one way.

Sorry for the necromancy (2 times in one day!), but I had some questions.

Kind of a followup to EoN's first question and your answer - how much do you plan your organization in advance on these? I bought one of these notebooks based on your recommendation and I love it, but I'm 10 pages in and already feel "self-conscious" about whether or not I'm using the best pages for the best purposes, and fighting with myself on whether or not I should just fill in the pages in order. Obviously one of the page styles is perfect for hex-maps, but other than that, do you just flip through pages when you're working on something to find the perfect style, or do you more like just go to the next blank page and let inspiration take you wherever it may?

Necromancy is fine--questions are good.

Honestly I have one that is just filled with sketched and gibberish. When I have a more fixed idea I transfer it to the other one.

When I am working on an adventure or something I usually sort of get an idea of what kind of visual it needs and then turn through the pages to find the grid that matches best.

Ah yes, I have a similar process with my Moleskin dot grids - in one of them I just free-write and sometimes (rarely) even remember to put a post-it "tab" on pages I like, then eventually I transfer to my nicer hardback one. I like this new notebook so much though (it feels like I'm carrying around something special that deserves a clasp and gold-foil bookmarks) and I don't want to sully it with scribbles and unorganized shenanigans.

Thanks for your response!