Just got finished texting with Kenneth Hite--he's agreed to do two Demon City stretch goals--one on sacred architecture as horror and one on the Lovecraftian mythos.

It's not on the Kickstarter page yet because I just heard it, but Mike will add it on to the official page soon. 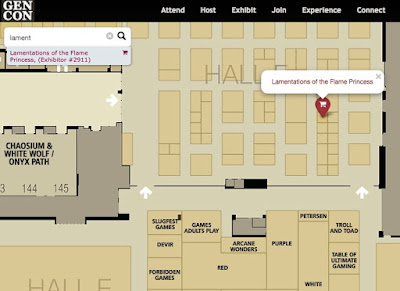 So far me and Stokely are coming from LA, James Edward Raggi IV will be at the booth as well of course. Beyond that I don't know.

Where will you be I want to kill you?

Lamentations of the Flame Princess Booth #2911, at the Ennies when they happen otherwise text me.

When do you roll up so I can murder you because I am terrible?

I'll be at the booth Friday, Saturday and Sunday, usually after noon-1pm because I sleep late and am on LA time. You cannot murder me there will be security at the booth.

Should I go to the Ennies so that I can violently assault all of the many OSR nominees or just angrily leave and tweet about it when they win?

You should not. But if you want to cheer the many many many many deserving OSR and DIY RPG nominees this year you must definitely roll up and sit near us. It's free. Also there will be security at the Ennies this year. It's Friday night at Union Station and Contessa Stacy is one of the hosts.

Will you be throwing another party?

This year's post-Ennie party will not technically be hosted by me, but there will be another party and if you come to the Ennies and ask me I will tell you where it's gonna be at.

What if you don't win anything?

I probably won't because the competition is fierce af this year, but so much of what's nominated is worthy that there'll be a lot to celebrate. I got enough already.

If you buy at least 10$ worth of stuff at the LotFP booth, sure. It doesn't have to be LotFP stuff, it can be from any of the DIY RPG folks who also have stuff at the booth, but you gotta help somebody out. That's the rule.

Will you draw a funny picture when you sign it?

Will there be copies of Maze of the Blue Medusa available?

Some are being shipped to Gen Con. So assuming they aren't sold out by the time you get there, yeah.

What about Vornheim, Red & Pleasant Land and Death Frost Doom?

Will you be selling original art at the booth?

No but they're here.

Do you or Stokely have a thing about having your hand shaken?

Can I get a picture with you and/or Stokely?

Stokes makes her own rules but my price is snacks. Or Dr Pepper. No chocolate--cashews, dried apricots, healthy things are nice. It doesn't have to be big. I don't like to leave the booth while people are there and I talk a lot to a lot of people so I get tired and need energy to hock these fucking wares yall.

What do you do while at the booth?

An extensive improvised mountebank spiel, peppered with anecdotes everyone at the booth has heard a million times. The word "barking" as in "carnival barking" refers specifically to speaking using only the front of your mouth, articulating quickly in a relatively high-pitch using your tongue and not your throat, which allows you to talk loudly and continuously all day without messing up your throat, did you know that? I learned it from Neal Adams on Kevin Smith's Batman podcast. No relation. To Kevin Smith anyway.

Are you running any public games at Gen Con?

Can I run Demon City or something while I'm there?

Can I tell you about my character?

Please tell me about your character.

I like your work except this one thing about it, should I just be polite?

No. I will respect and like you much more and be much less bored if you tell me about things you don't like about my stuff and then we talk about it.

Will you remember my name from last time?

Very likely not because my booth memory is terrible and I meet a lot of people but if you have an online handle remind me.

Will you tell me Borderline Unbelievable Insider Information?

Perhaps if you ply me with drinks.

Will you tell me The Secret Anecdote That You Only Tell People In Person?

If you're nice to people.

Will this blog entry end with an advert for the Demon City Kickstarter?

So many great titles up for the Ennies this year. I could not attend GenCon but I plan to have the Ennies show going while I'm programming that night.

Good luck at the Ennies! Wish I could be there.

Mmmm, sacred architecture sounds kinda ghostbusters 1. Like, if you don't have proton packs and pew pew is only a sometimes option it totally becomes a tense crawl into mystical obsession, ya know some gozer the traveller shit minus the jokes. This is the bill murray from the razors edge, palms damp as he knocks on the door to dana's apartment. He knows that something is wrong here. Something in the walls, or maybe it goes all the way down, deep into the foundation. Bill is to busy with a building that wants to kill him to reflect that deeply, his senses severed at the line where fear begins. He knows his equpment is useless, he questions the effectiveness of the pistol in his pocket.