The Mayor of Demon City 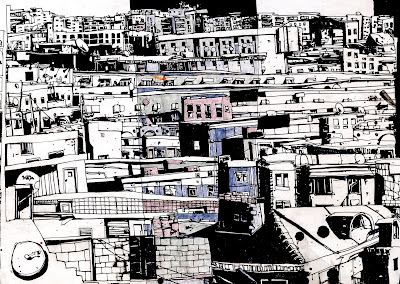 His name is Harold or Leonard or Norman or Gilberto—Rosen or Suarez or Daoud or Hackwell. He started the good way—the way you’d hope a mayor would—crusading on the city council, advocate for the elderly because of something that happened to his aunt in a home. Given what he had to go on: not a bad guy.

There were never any arguments or any fireworks, no broken legs, it’s just: one day you have to meet with the real estate guys. That’s what mayors do. The real estate guys said “Meet us for breakfast” and then their people put a breakfast in front of him: the exact same breakfast he’d made for himself at home for years. It’s not like he’d ever told anyone what he made himself for breakfast. It was right down to the brand of bacon. No bits in the orange juice. The same plate.

They knew everything was the point. We can get anywhere.

The agreement was not complicated: the mayor would go on mayoring but once in a while there would be a “Don’t do that” or, less often, a “This has to happen” always with no explanation why. Sometimes these were easy to understand “The train can’t run through the Garden District” sometimes less so “No free public wi-fi on 18th and Peach”. But he didn’t want to die—and they gave him stuff—club memberships, good coverage in the news, money. He understood they were far more than just real estate people: also newspaper people, the guy that owned that cruise-ship line, the savings and loan people, the oil people…

Sometimes there’s a body they find in a river with their sternum cracked open and their skull cut four ways down the center so it opens like a rotting meat flower and the Mayor thinks “Did they do that?”. And then you wait for the police to not solve it or solve it and then probably it was just some gang or maybe they are halfway through solving it and you get a call to reprioritize.

The mayor was only sure of a few things: