Down and Out In Demon City 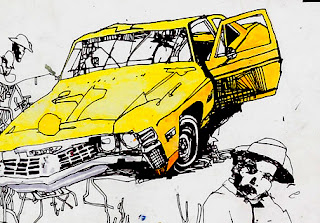 Although it seems chaotic to outside observers, homeless life is actually a highly regulated existence in a lot of ways. Major institutions and trends determine the patterns:

One of the most important is access to social services—cities generally have a wide variety of hospitals, urgent care centers, mental health facilities, testing centers, clinics, women’s centers, welfare offices, housing offices, etc that handle the homeless and indigent. They’re among the worst places in the world: in addition to being of course understaffed and underbudgeted places held together by off-white paint and chicken wire, a surprising number of the employees are just sociopaths happy to have government jobs with benefits rather than rough angels who work in places like this mostly because they want to help people (though there are a few of them). The only thing convenient about them is they’re often clustered geographically together. When they’re not, there’s usually a well-worn bus route “everybody” knows on how to get from Treatment to Housing.

The effect of this is that the homeless—especially the ones most in need of government services like the ones in wheelchairs and the ones who need regular medication—tend to hang out in these areas.

The city knows this. The city also tries to shape its homeless population’s distribution so it’s at least concentrated rather than spoiling tourist’s views all over the map. So things happen like: if someone’s released from lock-up with no fixed address, the police may actually just drop them off in the “homeless zone”. Tents and tarps are tolerated in specific places the city’s decided its not a priority to do anything about.

The other dynamic at work is that panhandling tends to be more lucrative along major downtown commercial streets. This sets up a fundamental tension: the homeless tend to beg exactly where the landlords would prefer they not beg.

The police are the front in this war between the rich and the starving. They are frequently asked to find reasons to arrest the homeless or at least scare them back to where they came from. For a Demon City host, the most important idea is: the homeless and poor are more in contact with the city’s nervous system than nearly anyone else. When they’re outside their “zone” the police are nearly constantly shuffling them off their corners and writing them tickets for blocking the sidewalk. When they’re inside their “zone” they see social workers, nurses, and patients they know constantly. They are locked into the city’s weather, its traffic patterns, its calendar. That pall of incomplete attention that can cling to their eyes isn’t stupidity—it’s sleep deprivation, because they have to match the patterns of sleep to so many factors in an outside world they have little control over.

Brrr. So very good. Things are bad enough in that situation without the extra nastiness of the demons.

Makes you wonder if the nastiness of the demons isn't actually that bad, all things considered. A well-dressed man places a few coins in your very empty cardboard box and offers you a job. Is that money, and that job, any better or worse just because the fellow leaves behind footprints of melted asphalt?