So for a while I've been trying to figure out exactly how to get the tarot card further down into the guts of Demon City than it was. It just seemed like more and more the big question was why can't the game be all tarot cards instead of dice? Why make people use two randomizers if one goes along with the game and the other is basically just the most common option? 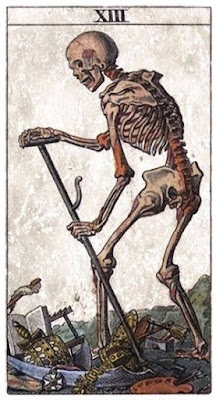 There are a lot of design pitfalls though:

-The cards can generate numbers very much like dice, BUT you don't just want the tarot-ness to be a cosmetic gimmick. Wands and swords should matter and The Devil should not just mean "15".

-Onnn the other hand if the cards are always throwing their symbolic weight around then you risk having a resolution system where someone's trying to do a simple RPG crime-horror task like try to recognize a mugshot and the cards are suddenly like HAHA! THE EMPRESS! and then you have to deal with multiple layers of interpretation just to get through natural gameplay scenarios.

-The whole thing of the tarot is that it tells you what's going to happen, but...in RPGs (at least the kind I make) you aren't ever going to be able to completely predict what'll happen.

-You don't want to create a situation where the system is suddenly less flexible and less convenient than dice but basically doing the same things. Like I don't want anyone cheated out of a fun game just because I want some precious themes stuck in there.

-You don't want to make it a deck-building game. Distracting players from clever things their players are doing in the game with card-management tasks would be bad. Especially because this is not a game where most players throw magic around (except the occasional lone psychic or vampire character).

-I already have a gajillion d100 tables in Demon City, I'm not gonna knock them all back to d78 tables just for aesthetic consistency, that's some serious form-over-function.

-So: the cards need to be as intuitive and frictionless as dice, while still taking advantage of the special qualities and associations that tarot cards have.

And....I cracked it. There are no dice in Demon City now.

(Ok, actually I am building in a "dice option" that covers the same bases in case you're like at a con or game store and suddenly decide to play but there are no cards. But the default uses cards.)

Here's how cards work, basically. These aren't how the official rules in the book work but its a quick rundown of what you'll see in the current draft:

Part of the Hosts job is to take the full tarot deck and make mini-decks out of it to play with.

The first and simplest is the Character Deck, which just randomizes number for character gen. This solved a problem I was having before: I want numbers from 0 to 5 but I wanted extremes to be rare and I wanted the math to be simple. The character deck has 4 Aces, 4 twos, 4 threes, 3 fours and 1 five (of any suit) and The Fool (0). So then you just shuffle and pick your 7 attributes from the deck. Easy peasy. Hack-happy Hosts can even adjust the odds as they like manually to make more-instabadass or more-bathetic characters. This part actually makes dice-for-character-gen seem kinda like a kludge in comparison.

The Host the makes a "Players' Deck" and a "Horror's Deck".

The Horror's Deck has one of each number Ace-10 plus any cards associated with the scenario and the specific Horror for that day, also the specific Ace through ten chosen will be the most thematically appropriate ones for the scenario. Advice on how to do that is laid out.

The Player's Deck sits in the middle of the table face down. Instead of taking set numbers of dice and--when its time to roll the Clash--everyone rolls dice and takes the highest, you take set numbers of cards off the top unseen and, when its time to resolve the Clash, flip them over and take the highest. The math is the same other than certain numbers slowly get depleted until you run out of cards and reshuffle.

The Horror's Deck is just used by the Host the same way. The Host, at least in the beginning, will have a few unbeatable cards (over 10) because hey it's a horror game. But they will pop up randomly rather than when the Host wants them to.

When a Big Bad is taken down, the Host fans out the Horror's Deck face down and each player gets to take one card.

This card is that PC's Significator (old tarot lingo). It gets put into the Players' Deck for next time. When you pop your own significator it's a crit for you, but each one also has a specific reward related to the card's occult meaning that can be called in at any time, which "burns" the significator and takes it out of the deck. You have to trade in your old Sig for a new one when you defeat the next menace anyway. While there's now several in the deck, each player only has one that applies to them at a time, so it doesn't become a whole thing of keeping track of cards.

The Fool also gets mixed in to the decks to act as a fumble (and yes, there's a rule for if the Fool is your Significator).

d100 rolls can be made from just taking 2 cards from the Players' deck (the Horrors' deck makes it harder to get repeated numbers like 44), one for each digit, 10=0 as usual.

And some monsters have a special mechanic for when one of the cards associated with them pops up.

Aaand other occult mechanics can be bolted on around predicting cards, seeing cards, which suits pop up, etc.

on one hand, knee jerk reaction is that I don't really like this decision which i'm bummed about bc i've been super excited for demon city for as long as i've known about it.

the tarot system seems to me like a seriously inventive mechanic but adding that level of mechanical originality and complexity is going to make the system learning curve more intimidating (whether or not it actually makes it steeper is different, but it will make it seem steeper) and thus less accessible. i'm worried the tarot thing will seem at first like a complicated gimmick and that my friends won't want to try this new system with me because it will seem like more of a nut to crack than "hey zak s made a weird modern horror game (which uses dice because it is a game)"

oops apparently i only have one hand

If you want you can run a "dice only" version, it'll be built into the game as an option.

Perhaps Aleister Crowley's Thoth tarot deck would be the most appropriate for Demon City?

It looks so goofy though.

oh cool that was actually something i wanted to ask about

also after reading over your post again and looking at the tarot set image i am less intimidated by the tarot mechanic and now i just want to try it and see how it plays.

The Thoth and the Rider-Waite tarots are the two decks I most admire. Do you have any favorite tarot decks (in terms of the art), Zak?

For a game, its hard to beat the Waite Deck's archetypal imagery--most interpretations are based on the pictures in it and it has a sort of culty power about it

The Hermetic Tarot is the authentically creepiest

There are a lot fo decks that have good art, but don't quite feel Occult--David Palladini's deck for instance

Pre-Waite ones are often interesting, though their number cards are repetitive--I used a variety of decks to illustrate the Tarot Rooms posts

I'd pay good money for a deck of tarot that you painted, Zak.

I like this setup! I've always thought Tarot would make for a flavourful randomizing element in the right RPG but never found the right fit. Breaking them up into mini decks to use specific elements for a horror game is a great idea! I love it!

Wasn't Satine Phoenix working on a Tarot Deck once upon a time?

I'm into the Tarot-based resolution, as it sounds easy to implement, although I am also very grateful for you to keep the dice system as an option since it felt really good in play (I did run a few micro-sessions to try out the dice rolling as I had a hard time figuring it out initially - it's not badly explained, I just suck at grokking new systems).

My friends live in different parts of the country so we usually play with voice only, so Tarot sounds difficult to use in the regular games.

I couldn't love this more!

Wow there are so many new ideas in this post I'm going to have to read it a bunch to fully absorb them. The signifiers loot sound incredibly fun. The mechanic of flipping over cards for resolution will be much more satisfiying for tons of dnd style opposition. How do you tackle card counting, where players know if the rare cards have already hit, it gives players too much info about future odds?

Well nothing stops anyone from card-counting but...

-You're looking for high cards not specific cards mostly so that limits it a bit. It's not really a feasible strategy to sit around waiting for your Significator to come up out of 30some cards and otherwise not act.

-And with 30--35 cards the deck will be reshuffled an average of every 5-6 full combat rounds so that also limits utility.

-A way better "math wizard" strategy is just to get LOTS of cards on each roll which means teaming up on the monster and seeking advantages a lot which is exactly what you want players to be doing anyway.

I've been looking for a way to tie the tarot deck and rpg for a long time. It is definitely more straightforward to use it as an adventure generator than for resolution, but I'll research your method further.

I don't think my players or traditional players would want to drop the dice method, but I already was interested in this game and it just keeps improving!

P.D.: yes, please make your own tarot deck.
P.D.: props on using the marseilles deck instead of raider-waite!

Sorry, you are using raider-waite (strength and justice are swapped). I got confused.

@zak
Could you put a link to this post on demon city kickstarter page? It helped me to understand the tarot system and I believe will help many others that are asking for that on kickstarter. If you already did that, sorry to bother.