Some Things To Know About Cops & Crime 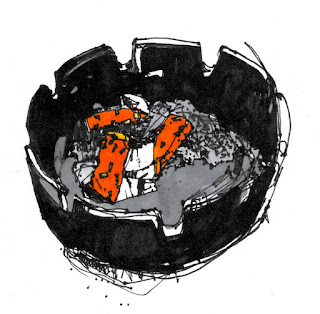 For any game involving modern crime including the one I'm writing...

The best way to deal with the law is: wherever your personal knowledge of real life legal procedure ends, that’s where the horror begins (again). If you don’t know what happens after someone gets to Central Booking and don’t want to look it up then, of course, that’s when the corrupt police or cult-infested gang members show up. If you can’t figure out how a party’s trial would work and don’t want to read up on it, have a zombie eat their lawyer.

Legal procedure in Demon City is conducted not under the sign of Justice (11) or even Judgement (20) but under the sign of the Hierophant (5), the figure of orthodoxy, changelessness, and the lies that feed illusions of continuity. Police think anything strange is drugs, juries resent being asked to care, and neither prosecutors nor defenders want to ruin their records taking cases they might lose.

That having been said, crime is pretty fun, so here are some things about it you can use, straight from our world:

Courts can take forever even to do simple things. If your PCs get arrested, they probably won’t be in court—or necessarily even in jail—the next day.

Estate sales are a bonanza for horror and crime scenarios—they’re full of things left behind by people who nothing left to hide any more.

It can be really hard to get good fingerprints or physical evidence even if the criminal doesn’t actively try to prevent it.

In the USA tracing a gun to its original purchaser is actually hard on purpose due to laws preventing not just name-searchable databases but even computers being involved in the process. All gun traces are done through a handful of Bureau of Alcohol, Tobacco and Firearms employees in one office in West Virginia looking through boxes and microfilm and calling gun stores that may or may not still be in business. There’s a 65% chance they’ll find whoever bought your gun.

Switzerland is one of the first places they look for stolen money.

Police k-9 dogs work with basically one handler—they have a relationship that isn’t easily transferrable. Many police German shepherds worldwide were literally trained in Germany and take directions in German.

There is no rule in the US about how long you can be in Immigration Detention. You can be there for years.

Running a license plate can go wrong—you often have to type it in manually.

Desperate people selling babies is weirdly common, even in the US in 2018.

Big city police are often working multiple murders, 9-5pm or 8-4, it’s easy to just run out of time on one murder if another has better leads to follow up.

Even petty criminals who don’t know much about the internet do about a billion things on the dark web, like buy drugs.

Art theft and rare book theft often go wholly uninvestigated by police, even when the goods are relatively valuable—it’s a good way to bring in amateur sleuths like PCs.

The thing they use to collect evidence from sexual assault victims is called a Physical Evidence Recovery Kit (PERK kit).

Forensic scientists boil bodies to get at the bones—they boil disconnected small pieces like fingertips in crockpots.

Decay of bodies:
-First: Rigor mortis
-Second: Bloating, which takes 3 days to weeks depending on climate and local flies and maggots
-Third: Organs liquify, releasing a black liquid called “purge fluid”
The corpse’s skin will turn dark at some point and the purge-fluid is so nutrient rich that plants will grow well where a body has died.

The private prison system and prison overflow has made prisons in the US a mess. Coed prisons are not unheard-of and there are many anomalies like Sistersville—a white-collar minimum-security prison that was also the last residential center for people with Hansen’s disease (leprosy), the prisoners mixed with the patients.

When police need translators, they may get them from any other unit or even from outside the police force. The person may not be a professional.

Other random police often have interviewed everybody they think is connected to a murder before homicide gets there.

Police on the scene can and regularly forget pretty much anything—they can miss used needles and bullet casings, they can even forget to seal off crime scenes.

In important investigations, the FBI and Homicide really can have turf wars—both sides want the information the other side has, but both sides often think the other guys will mess up the collar (or just steal credit) if they give them too much information.

Getting something special like a helicopter up or a scuba unit to look for evidence in the water is largely a matter of logistics and luck—sometimes people are available, sometimes they’re not.

Murder detectives can be promoted up to that position from any other unit.

Police try to interview the least important people first in order to build a background of minor details they can use to catch bigger fish when they’re lying.

City police departments can be organized in a million ways. Homicide Special, in Los Angeles, handles any murder deemed important (12-15 cases a year) and has no receptionist—so if you call them, you’re talking to a detective.

At least in LA, the binder containing all of a homicide case information is called “the murder book”.

Detectives come in different grades and different departments do it differently—in New York the entry is 3rd and the highest is 1st.

Organized criminals from Europe often get Mexican tourist visas then come into the US that way.
-
-
-

A lot of police officers (not all, but a disproportionate many...) don’t like being cops anymore. They’re disenfranchised and disillusioned. They provide the immediate level of protection required but the revolving door legal system has burned away any other zealous idealism they may have held when they began their careers. As such, many have side gigs, i.e. they own a bar, they’re a handyman, they work night shifts as a store manager, whatever... This is especially true if they are near retirement. This provides two angles: 1. PCs May interact with law enforcement outside the line of duty (Good for favors, privileged info, etc... if the players are smooth and can offer the cop something for their side gig) and 2. A reason for a cop to be distracted in the performance of their duties and miss a beat or not care as much about something they don’t view as a big deal.

Also, many police officers are very poor marksmen with their duty weapons and are terrified when put into use of force situations. It comes from paying very little and unions saving even the incompetent from dismissal.