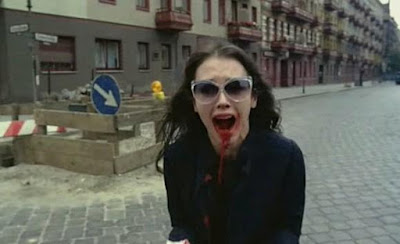 Panic Modes occur when a Demon City character is at exactly 0 Calm. (Not negative calm--at that point total ineffectiveness kicks in, but since you lose 1 Calm point at a time, you will always pass this point on your way to negative calm.)

How a PC behaves when they panic depends on their role:

The curious character's panic will come in the form of fascination. In addition to this general role-playing prompt, in the round after they hit 0 Calm they must try to find out something new about the situation they're in.

Used to relying on method, and here for practical reasons, the investigator in a panic is simply less effective. In addition, they must spend the next round after they hit 0 Calm either fleeing or acting with only 1 die.

The problem will revert to instinct when in a panic. In the round after they hit 0 Calm they must use their special abilities

The victim in a panic is energized. In the round after they hit 0 Calm they will act with 1 additional die if it is against the entity or entities they believe to have hurt them, and will keep that die for that purpose until the menace is defeated or driven off.

This is a great idea! Love the Possession still too!

Does the Investigator's decreased effectiveness manifest as -1 die or is it a narrated situational thing?

After that first round I haven't decided.