So This Art Collector Comes Over... 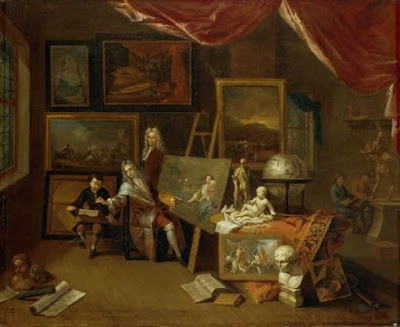 I'm like Do you want me to hide the pictures of naked women?

During lunch at the restaurant that inspired Disneyland, I see why. This child has never seen anything but his phone.

He did look up for his chicken strips. Then he looked for an outlet.

I get it--I was a kid. There are games on that phone, and they looked fun.

So then we go back to the studio (this is what you get to call your apartment if you're an artist) and we're looking at paintings and talking and the kid is on his phone and the art collector's like "What are those books over there?"

I explain how I made the original painting and then gave it to Patrick to decide what the little things in the rooms were and then we went back and rewrote it all to make it a playable dungeon and how it was on Vice's top books of the year and...

...and it becomes clear,  this art collector has rolled.

And the kid is like, But Dad my phone.

And they start asking D&D questions: Do I play every week? Who plays? What are the rules like? Do you have to be good at math?

And then I'm like...Hey, do you guys want to just play D&D right now?

So I ran a game of D&D for an art collector and his kid.

Collector got a pre-gen gladiator he named Cavity, the kid rolled up a fighter named YayDaddy! and was pretty excited to hear he could buy a wardog.

Kid completely forgot about his phone--he did ask if he could stick his finger into the dog's sphincter ("sphinx") so he could make him poo and throw it at the goblins, though. Real strategic thinker.

They almost died but had to go to a basketball game. Kid was like "So, do we get treasure?" and dad was like "Ok, so if you were us what would you have done different? Should we have run away from the goblins?"
-
-
-

My 11 and 10 year old boys just started in the Maze of the Blue Medusa last night. They've done better than my adult friends and are loving rubbing it in. It's a great way to engage with them. You probably just had a huge impact in that kid's life. Imagine how many of us would love a game in the maze run by you or Patrick and he just lucked into it.

Buy a painting and I'll run a game for your kid no problem
:p

Nah, totally depends what they were talking about.

This story made me so happy!

Warm fuzzies. You're a good person.

This is possibly the best story I've heard this year.