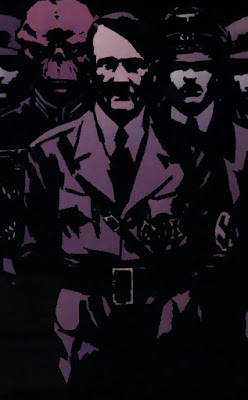 In a typical superhero world, it's hard to have a sandbox campaign. The real superhero normally must always pursue the greatest threat they can, not a chosen target from a target-rich environment.

Not so totalitarian worlds: if the heroes are undermining the regime, you're back in a target-rich environment, where weighing chance of survival versus juiciness of target in an overall plan makes sense.

This does rather tend to undercut both the moral and social order the traditional superhero game rewards upholding here in what Hannah Arendt called "the world of the dying, in which men are taught they are superfluous through a way of life in which punishment is meted out without connection with crime, in which exploitation is practiced without profit, and where work is performed without product, is a place where senselessness is daily produced anew" you're gonna be doing less rescuing kittens from trees and more punching cops and taking their stuff.

So for my new Marvel campaign, I had to rewrite the standard Karma and Popularity awards. This should also work for other similarly terrible worlds like Days of Future Past or Darkseid's planet Apokolips. Aside from "crime" no longer being a meaningful category, I also slightly lessened the karma loss for failing to stop atrocities since basically all day it's atrocity.

I also threw in some things that just reward the players for being cool.

Popularity scores work in reverse when dealing with anyone loyal to the Stadt.

Sounds like a world that is a right fit for the Golden Age Superman, who along with fighting street-level punks, fought against social injustices, even in the opposition of laws and members of authority. Although, unlike later incarnations of Superman, he straight-up murders criminals without remorse!

In your world, the original Superman would be a villain who is fighting to make the crapsack world a better place to live, whatever anyone likes it or not. (Wow, almost like a Bizarro World into itself!)