An Art Lesson From the Late Goblin King

The girls are talking about their first crushes, they're all inhuman and inexplicable--cartoon characters, Boba Fett, bears, tigers, aliens.

When it comes around to Sasha Grey's turn she says "David Bowie in Labyrinth," because Sasha has to be stylish all the time.

Then immediately the girls were like Yeah, definitely, David fucking Bowie in Labyrinth.

Last night a young grown-up in the middle-stages of Bowie-grief told me, quite seriously "Jareth formed the basis of my entire sexuality." This is common enough that magazines have whole articles about it... 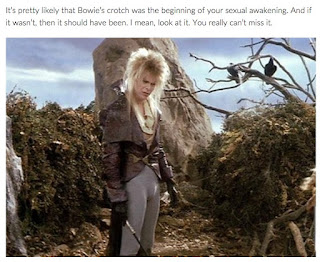 Labyrinth has sexuality in it the way a Pathfinder book with a boob pirate on the cover does--only by implication. Though there's no actual sex at all in that movie (that story), it would be completely different if you kept the text the same but changed the images so the utterly sexualized Jareth was some gnarly unfuckable goblin dude (Dark Crystal) or an older woman (Wizard of Oz) or something else. It would mean and feel and be something different--the theme of temptation, the whole metaphor about growing up, that twilight alone-in-the-big-house-teenager-feeling, all that would've landed with a different impact. And it was a massive impact--when Bowie died, Labyrinth was trending on Twitter right next to Heroes and Ziggy and Moonage Daydream.

This all illustrates something often overlooked and difficult to convincingly articulate in the heat of the mercifully-less-common-but-still-depressingly-possible conversations about barbarian biceps and chainmail bikinis in D&D and its cognates: namely, that sexuality in these stories isn't just a detour from the story dropped in to please (or upset) some segment of the audience. It's not the thing the word "fanservice" tries to suggest it is: it's a functional part of what makes worlds we know are fake resonate in the minds of people who only live in the real world. It is part of the fabric of the story--inevitably and every time. It needs to be inasmuch as any other part of the story needs to be if it wants to be that story.

The fantastic has resonance because it reminds you of something, but transformed, and everyone (everyone) has a time and a place they can go to in their lives when sex was a scary, dark, poorly understood thing.

A great deal of what's in fantastic stories works by accessing the dream- and child- consciousness, by ricocheting around the mind's defenses, and pulling on the mind's strings by coming through a side-door. Sex is not just a thing that's there to bring in the teenagers--it's part of human consciousness and fictions are about fucking with human consciousness, and when any common part of the human experience is too strenuously avoided in a fiction it becomes conspicuous by its absence and the whole thing feels janky and artificial and fails to leave a mark in the mind. How many High Courts full of characters as plausible as Ken dolls do we owe to TSR's mid-80s sexphobia?

It's really easy to point to examples of artists who use sexuality as part of the palette--besides Bowie, there's nearly every other pop musician on the planet, in art there are the Beardsleys and Schieles, in fiction, even the Bible has the Song of Songs--but for some reason people let the geniuses who talk about tabletop games pretend that even in games for adults sexuality is some removable crowd-pleasing genre convention, like katanas or some shit. Can we get over our embarrassment and just point out how frankly fucking immature that is?

If you want more Bowie-sexy and less cleavage-sexy in your game art, ask for it and blame art directors if they don't give it to you--but don't pretend there's something wrong with an artist painting what they want to look at. If the people at your table start getting creepy when sex comes up: kick them out like a goddamn grown-up, put that right there in the rules if you have to. But if you're going to pretend it's only there for horny fourteen-year olds, please fuck right off and leave the world to those who actually live in it. 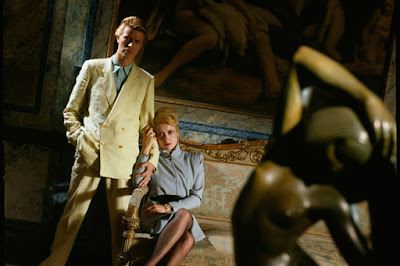 : It's not the thing the word "fanservice" tries to suggest it is: it's a functional part of what makes worlds we know are fake resonate in the minds of people who only live in the real world.:

This really, really struck me, because as far as I know the term "fanservice" comes from anime, and is almost invariably associated with anime featuring adolescent males coming to terms with adulthood. Of course there are lingering shots of cleavage and glimpses of underwear, because that's what 75% of a teenager thought processes revolve around.

And, of course, the way society treats fanservice - titillating but at the same time kind of squicky - is exactly the way many adolescents feel about their sexuality (the ones that never grow out of that conflict become the morality-in-media brigade).

It's all so obvious, once it's been pointed out.

Right. The Fuck. On.

This right here is why I check this site regularly. Well, that and all the cool DnD shit too but when Zac decides to write an essay on a subject it's always on point and says something I wish more people were saying.