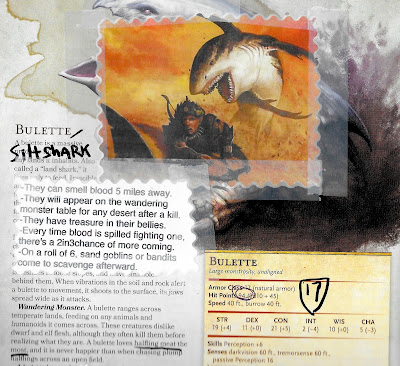 Back to redoing the monster manual...

The bulette never convinced me--the hulking, silver kaijulike creature in the late miniatures have their appeal but (as I've said before) I can't really picture them eating a knight. So fuck 'em for this game.

The silt shark from Dark Sun on the other hand, does the same thing with more charm. I imagine it parting the sand with the prow of its frictionless, pointed face. I love the subtle claws they did on the fins.

And god do players freak the fuck out when they see a silt shark come up. Something about the single fin in the sand seen on the successful perception check--or the toothy suddenness of the attack in the wake of the failed one.

Sharks aren't terribly complex creatures--and I have no desire to make them any moreso. The one twist I added was based on the whole drop of blood thing--like rhythmic footsteps calling sandworms, killing anything in the desert risks bringing more. And, of course, killing a silt shark spills silt shark blood--and risks bringing more. Plus the kinds of predators hungrier for metal than meat.
-
-
-

My players are currently travelling through a desert and I also took the silt shark over the bulette. Two other monsters from Dark Sun that appear on my random encounter table are the Dune Trapper and the Sand Cactus.
I like the twist on blood sense and will steal it from you.

This is rad. And timely, given your recent postapocalyptic posts. I always thought the siltshark was just perfect for After the Bomb/Mutant Future/Atomic Highway. It's a little bit of a gonzo monster in those settings, but then postapoc always seems to naturally drift gonzo anyway.