So I was going through the Monster Manual redoing all of the monsters…then I got to blights.

I hate blights. So boring. I mean: I'll use a creeper vine if I got nothing else, or this grabbing tentacle grass Moebius drew… 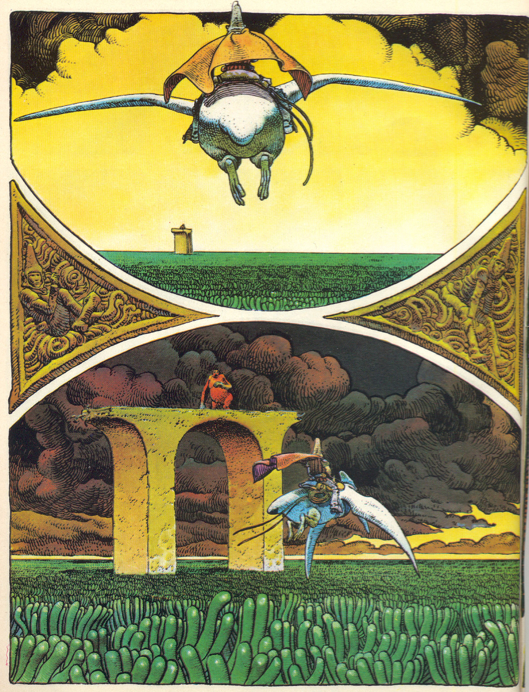 But they're just not interesting to me. I mean--moving plant monsters.
The Alan Moore idea that the plant monster doesn't know it's a plant is interesting. But that kind of thing doesn't really translate to gains at the table for the thing as a foe. I mean--one of them could be that way and you could build a whole drama around this Arcimboldo fucker who keeps trying to live a normal life and terrifying the village. But I already did that with the Hollow Bride--which I like much better.

Anyway point is I have no will to improve or examine blights--and for that I apologize. In compensation, here are like 60 plant monsters people made up when I first hit my blight block.

Seriously--they're good. I like Anthony's fetus in a pumpkin.

So, I am defeated and will just skip to the next monster…

What do you do with that? It isn't a bug it isn't a bear. I always think of this guy: 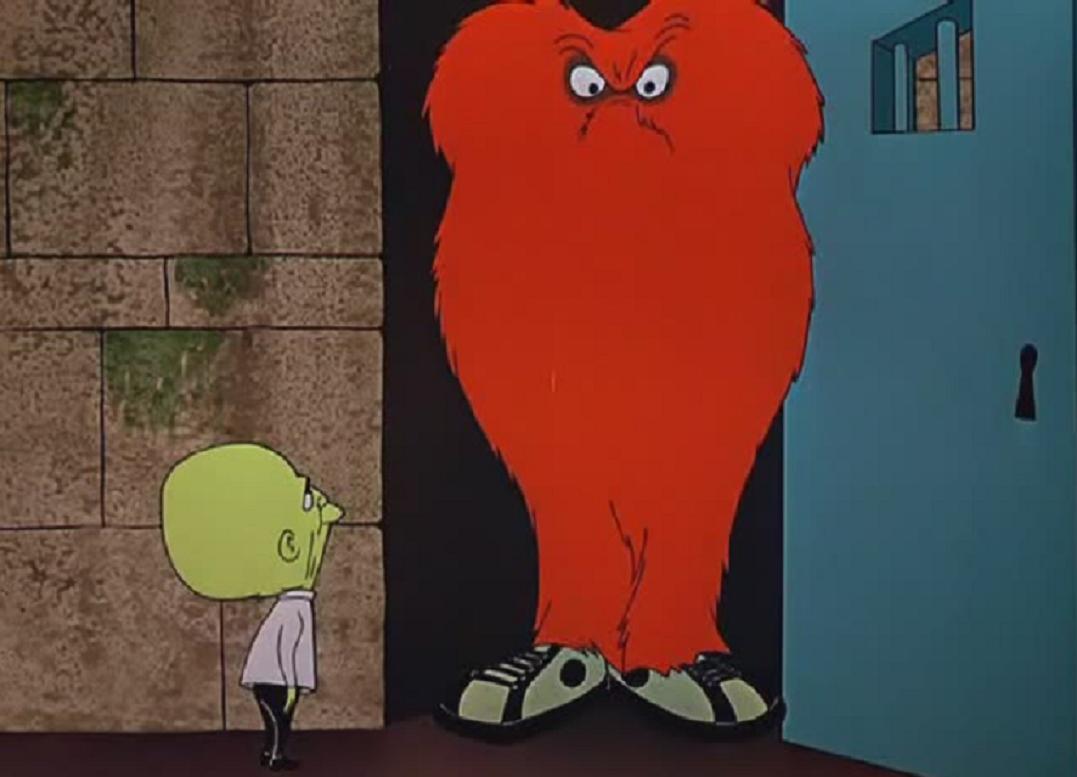 I got enough going on in my life that making that scary seems like some whole extra masochistic suck.

Bugbear:
noun
1.
any source, real or imaginary, of needless fright or fear.
2.
a persistent problem or source of annoyance.
3.
Folklore. a goblin that eats up naughty children.

So this is like a farmer-scaring monster. Which would be fine if we didn't already have goblins, hobgoblins, trolls, ogres…it's a crowded niche.

Natral History has its myths and its ghosts, az well az enny boddy else, and foremost among these iz — the buggbear.
The bugg bear iz born from an imaginary edd and iz hatched by an imaginary process.
They are like a shadow in the afternoon, always a good deal bigger than the thing that easts it.
They are compozed ov two entirely different animals, the bugg and the bear but generally turn out to be pretty much all bug.
They are like the assetts on a bankrupt broker, the more you examine them, the smaller they grow.
I have known them tew cum out ov a hole like a mice, and grow in tew minnits az big az an elephant, and then run back agin into the same hole they cum out ov.
They are like a young wild pigeon in their habits, the biggest when they are first born.
They are common to all country s and all peoples, the philosophers hav seen them az often az the children hav, and ben as badly skared by them.
They are az innocent az a rag doll, but are az fall ov deviltry az a jack lantern.
Bugg bears are az plenty in this world az pins on the side walks, but noboddy ever sees them but those folks who are alwus hunting for them.

So he was drunk.

Here's a picture of one from the play The Buggbear: 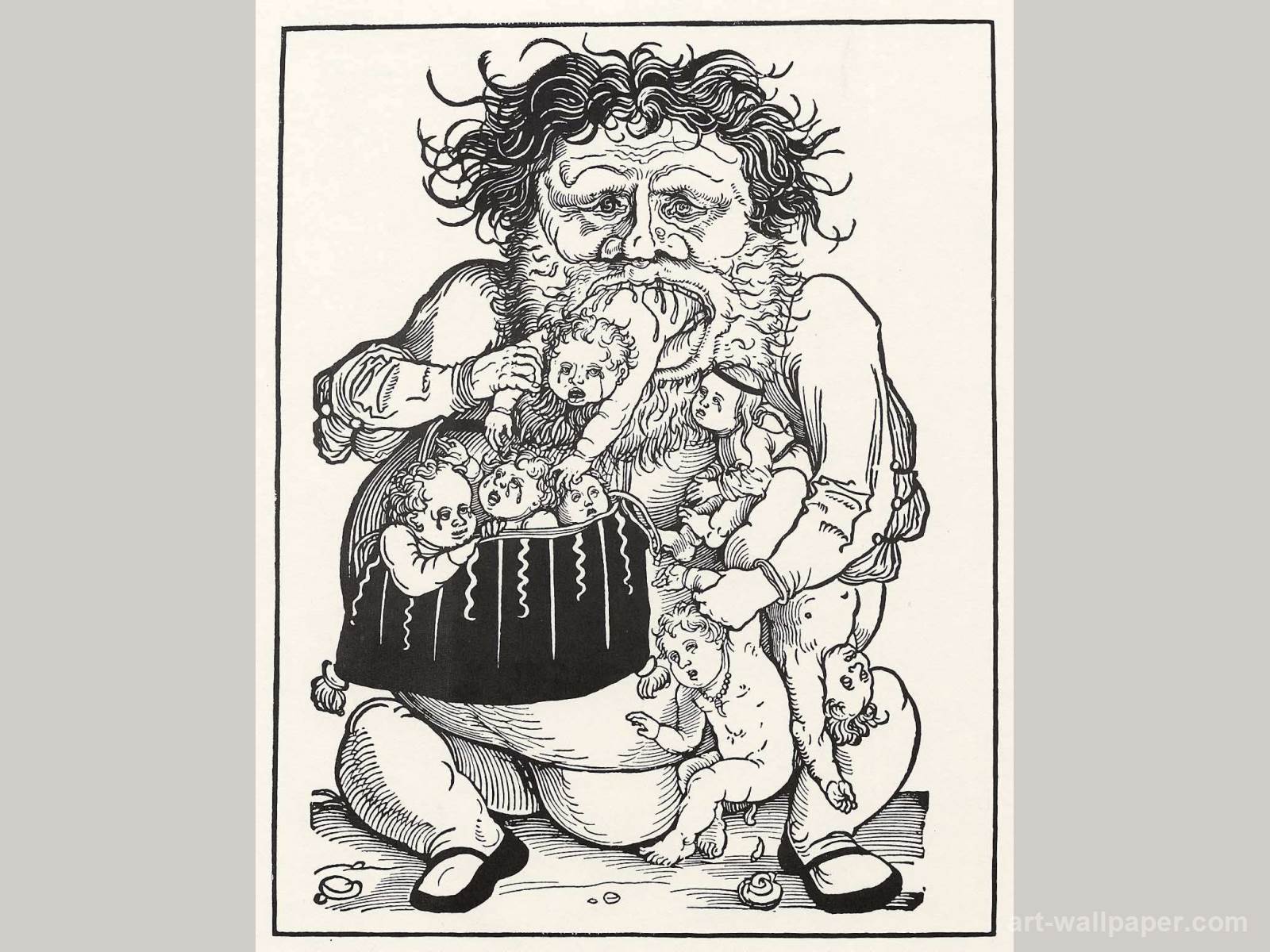 Obviously drawn by someone drunk.

I need a drink. Hold on…

Ok, on further reflection and my third Dr Peper, Dr Pepper Imean and rum. That sounds dumb: "Rum and Cherry Dr Pepper "I mean, I have decided this:

The buggbear is likt hat ogre cannibal guy up there with the saddle shoes on.

So the bugbear sneaks around and eats babies. And had some kind of bad gremlin magic.

You can only see him if you are drunk. But--the more drunker you are the bigger he does become. And the higher level spells he can cast. Also he could eat gooses. 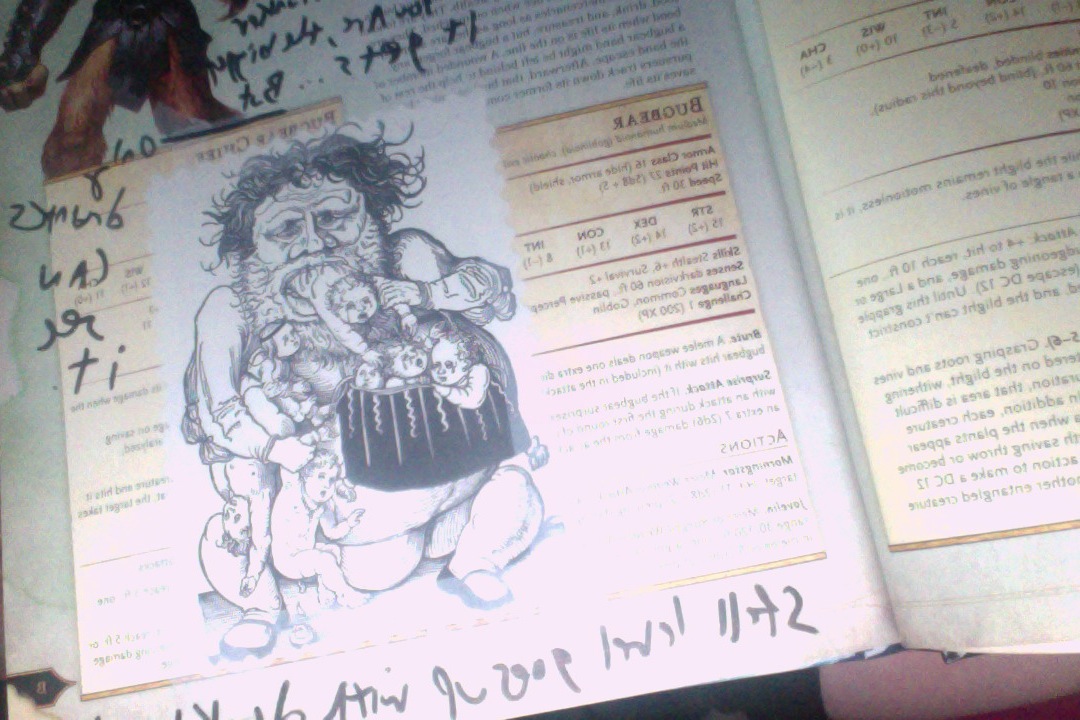 Thank you all for your time, next time is bullettes!
-
-
-

bugbear is also a really good name for a tardigrade

I think the site ate my previous comment, so here goes again:

I was hoping for something that fitted abit better with the amazons of the devored land series of articles.

It is interesting how diferent people get to diferent conceots from the same starting idea(e.g.: reinvent the bugbear).

when I wa sreinventing the Bugbear for my setting I had it that the "bug" in bugbear is the same as the bog in "bogeyman" and "nursery bogies", being it that abogey was a frightenign creature.

the bear parts came from they being Bears, having bear features(heads, claws, etc...) or wearing bearskin.

Thus in my setting Bugbears are supernatural Bears used by nature gods to punish creatures (nromally humans0 for real or perceived ofences (e.g.. not paying proper respect with sacrifices, killing a sacred animal, dessecreting aglove, reproducing too much, etc...)

bugbears look like child sized teddy bears with antennae. they psychicly broadcast love & friendship. this is to lure the innocent children into their lair. older children, tweens & teens, get a save to resist the bugbears charms, adults are usually not fooled. once the victim is in or near their lair, the bugbear opens their impossibly large toothsome maw to devour their victim whole. (later vomiting anything undigestible, bones, jewelry ect.) if confronted or attacked, they prefer to run than fight, hissing and growling ect. they are not very bold unless in numbers or very hungry. they can at any time sprout any number insect-like/evil-looking apendages, most commonly, spidery limbs to scuttle away, bat-like wings to escape, or wolverine-esque claws [snikt!) for attack and defence. like most things in d&d they are the product of magic gone awry or from another plane of existance.
http://images5.fanpop.com/image/photos/31000000/Evil-Bear-random-31036687-600-779.jpg

The 60 plants monsters link seems dead. Or not public viewable.

The Amazons will be getting a whole book to themselves, so don't worry.

You have to be in my Google+ circles to see it.

If you want in, send me a msg or email zakzsmith AT hawtmayle with a link to your Google + page

I always liked the RuneQuest "jack 'o bear" interpretation of the bugbear, based on the pumpkin-headed bugbear illustration from the original LBBs. But a critter that you can only see when you are drunk, and it gets more powerful the drunker you get? That almost sounds like a grudge monster to set after the players whilst carousing...