A Chunk Of Wonderland

Here's a bit from the upcoming thing and a crappy digicam pic of one of the pictures--the piece of board I'm drawing on's too big to fit on the scanner... 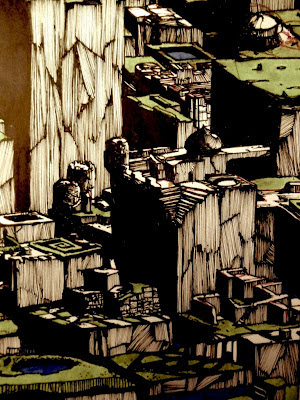 Imagine a grid or lattice laid over the land. The graph paper lines are rivers and hedgerows, narrow as alleyways, running at angles, defining squares the size of city blocks. Now build, in your mind, tall buildings of different heights up from these neighboring square foundations: one big skyscraper in each--in stone and in a medieval style, some ten, some twenty stories high. Give them gardens on their roofs and across their terraced balconies. Now link them with bridges. Now destroy them with time.
Some tumble, some crumble, some rot, some have four stories or five, some are half-left, some are squat, some are flat, some are holes in the ground, exposing the corridors under the Earth's surface. The remnants of the gardens spread over it all like a moss, or the icing on a cake the day after the party, coating Voivode's rainward face in a mask of friendly green, with the occasional window, door or rabbit-hole poking through, allowing access to the layered interiors.
Some say it looks like a house of cards made with too many decks laid out on a chessboard made with too many squares, all covered in grass and dotted with blood.

Email ThisBlogThis!Share to TwitterShare to FacebookShare to Pinterest
Labels: art, Eat Me

Good god, that's sublime. Love the art, and the prose is both spare and evocative. Well done.

I presume you'll be running this as part of your current campaign...

Lovely drawing, woodblock feel makes it very dreamy. Grid, idea and prose remind me a bit of the autocrat's utopia in Bely's Petersburg. Any influence? Worth a look if not, mildly pynchonesque pre revolutionary Russian farce about costume parties and mad bombers.

The description of the city reminded me of the video game Enslaved, which made me think of running a game set in such a place, which gave me a moderate-sized erection.

I immediately began rounding up players.

Through the looking glass into a city of madness and decay - to me, that sounds like Planescape done right. The idea of Sigil always seemed a bit too mundane for my liking. If your players feel like they comprehend what's going on, then something's amiss.

Is there going to be movement restrictions between squares based on class, like in actual chess? This also occurs to some degree in the wonderland stories.