I Am The Weapon (you can have it) 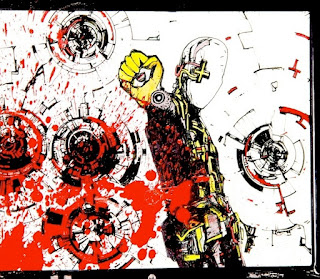 Once upon a time I was commissioned to write a superhero game and I called it I Am The Weapon.

Basically, someone saw the draft rules for Demon City and was like "Hey do you think a superhero game could work like this?" I explained that since Demon City was basically written for a power scale where humans are 1-5 and bad supernatural things are up in 6-10 it'd need some tweaking, but that most of the underlying ideas seemed to translate pretty well.

Instead of using tarot cards, like in Demon City, I came up with a system where different power levels use different dice, but the most fun part was putting together the character generation system:

The basic problem was that because superhero systems are characterized by the wild variety of their abilities, most superhero RPGs had disappointing character generation. You either have systems where you imagine a character and then bang on the system until it spits that character out--which is fine as far as it goes, but doesn't really get the system participating in helping to make the character more interesting, or give you new ideas--or systems where character generation is so random it results in characters that don't really feel like "real" superheroes.

My solution was to take the parts of character generation systems that were fun--you see something interesting within reach, you go for it, you pay for it by adding a twist onto the character you didn't see coming that, in turn, makes the character feel more real--and making the whole system about that. I also drew webs of overlapping "clusters" of superpowers that tended to be thematically tied together and built in options to make those available once you'd gotten a power "nearby" so that nobody was forced into making Rollerskating Ramhorn Man. Character generation in I Am The Weapon involves a lot of random rolls, but the rolls lead to choices, and I made an effort to make the choices the kind that had something for everyone.

It seemed to work out.

I ran playtests in random teams, usually three vs three, first with just my friends and then with people recruited off my discord. It was popular. The biggest fan was Fiona Geist--aka FM Geist aka coilingoracle--I told her "Fiona, whenever you can get five other people to agree to play over videochat all at the same time, I'll run a playtest". Everybody wanted in.

Inside baseball: Since it was discord, a lot of the playtesters were part of the 4channy clique surrounding Shoe Skogen, Emmy Allen / Cavegirl that Chris McDowall brought in through his OSR server, and all those people, who turned out to be basically sociopaths once my ex went insane--Fiona herself very much included. It might've explained why they all had so much time on their hands, I don't know. Anyway, it was very weird--people who'd cheerfully showed up for weeks on end to play supergames, roll dice and trade X-Men jokes with me were, less than a week later, suddenly patting each other on the back for spouting fascist rhetoric and explaining that "facts" and "evidence" were outdated pre-internet concepts and anyone accused was always guilty. Good times.

Anyway the point is:  it wasn't just my friends who liked it--the worst people in the world had to admit it was a pretty good game, and kept coming back for more.

I never got to finish it or do the pictures--the publisher decided it was pointless to release anything once the harassment campaign kicked off--but I did get a lot on paper. I Am The Weapon not only had complete rules and every super-power anybody ever managed to think up from superspeed to whatever the fuck B'Wana Beast does to animals to rules for those guys who just are the world's best at boomerangs, it had rules for superscience inventions and occult rituals (surprisingly similar in comics, actually), sample PCs (instead of making up a fake superhero mythology for the characters, I made up a fake publication history--so there was a psychedelic '60s eurocomics version of The Fashionista and a postmodern pseudo-Vertigo one), every table I could imagine wanting to improvise superhero stuff during a game, from random star-tyrants to crime-bosses, and even some alternate universes:

In the so-called “Transparent Earth” future, 99% of humanity lives in the Polystructure—a tightly-packed lattice of clear, spherical, plastic pods approximately the size of a modern apartment, extending off the surface of the planet-proper in every direction, like layers of bubble wrap around a marble. The concept of privacy no longer exists and collective life mostly consists of conceiving of-, and carrying out-, various schemes for optimizing the flow of various forms of nourishment and pleasure from one part of The Polystructure to the other and dealing with occasional “hookworms” (a catch-all term for people and organizations scheming to disrupt this flow). The Transparent Earth first appeared in Trajectory #1 as the future from which the near-omniscient heroine and her gravity-shifting engines—depicted as a common and convenient piece of technology for moving through The Polystructure—originated.

4. Malfunctioning emergency system has shot 8 pods into interplanetary space, the inhabitants must be rescued in the next 24 hours.

6. Moralizing sector of population discovers they have been secretly (and blissfully) sequestered from contact with more interesting majority.

First Responders In The Polystructure

3. Segmented and worm-limbed security droids that emit stun fields after leaping onto targets.

5. Nothing, but network of gnatlike tracer-drones observes and tracks culprits.

2. Reservoir pod filled with chemical parylitic for use in security system.

4. Site of recent IED murder—blood paints the inside of the pod.

5. Nonconforming artist has rebuilt pod as a cube.

Rules And Play In The Transparent Earth

Anyway, the game will probably never see the light of day now, but I put together a version of all this stuff that was written for the game so that people who were interested could see it and maybe try it out.

So far it works, but with hundreds of interacting superpowers there are probably some things that could be tightened up. 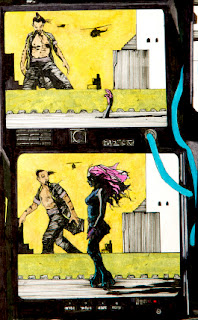 Email ThisBlogThis!Share to TwitterShare to FacebookShare to Pinterest
Labels: i am the weapon, plugs

I still haven't tried out all the cool tricks, but the parts that I checked are very nice. And some just make me go "It's so simple and so cool and should've been used everywhere all the time, so why didn't people do that?"
Another reason to act against the bad people is that if it wasn't for the villains, we could've gotten this in its complete form.

What is your opinion on GURPS Supers´character creation?

It's one of those...
"...systems where you imagine a character and then bang on the system until it spits that character out--which is fine as far as it goes, but doesn't really get the system participating in helping to make the character more interesting, or give you new ideas..."

Erased. Misinformation is not allowed in the comments.

My next step was to take an existing character and try to replicate his abilities using IATW. The result was a file titled "Lord Soth Is The Weapon". Even though he's not from superheroic setting, it worked quite nicely - his undeath, magic armor, ability to move from shadow to shadow et cetera all can be easily pulled out the list of powers, and tweaked slightly (need to get some Boosts for the high stats, after all).
Now I wonder if I could use it to make a bard.

Fair price, I'll hit the store when I can drop the scratch for it. Is this a limited time offer?

Also interested in opinions on better or worse "character banger" systems, because I have a playerbase that have very fixed ideas of their characters and tend not to need systems that provide curve balls in generation.

it’s avaiable for a mystery amount of time.

as for system recs: it depends What else you want from the system

Erased. Misinformation is not allowed in the comments.

If you believe you received this comment in error, provide proof of your claim in your next comment.

looks great from my initial skimming of the game. 2 questions
1) is this a dead project, or will you be working on it more?
2) what is part 3? Part 1 is Basic game, Part 2 is Host Section, Part 4 is the Library, and Part 5 is the Tables

1) I will be working on it more if you--you, specifically--go to unpleasant places on the internet and get to work decancelling me, and stick with it. If you don't, I won't.
2) I think 3 is the powers list.

I would if I could, but I got banned from a lot of those places, because I shared opinions that didn't mesh with their group think on other sites.

If you want the work. If you don't: it's fine to give up.