To Shanna Malcolm (re: muppet tits)

I saw the news that you're going to be in a D&D show--congratulations! I hear there will be muppets.

I'm also scared for you because you're about to be extremely harassed a lot by assholes online. These are assholes I know. The reason is because you wanted your D&D muppet to have big tits: 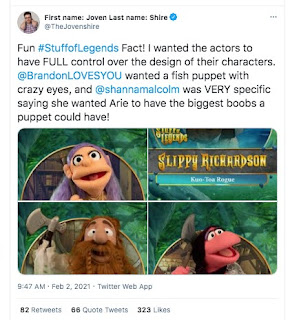 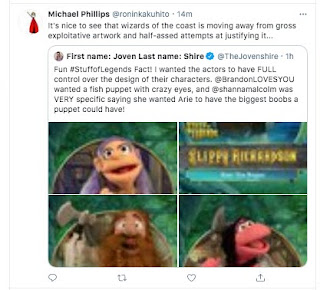 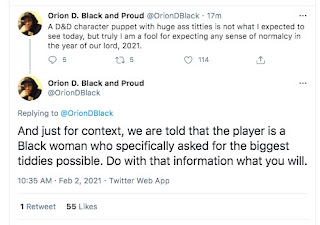 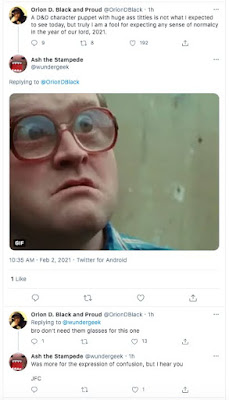 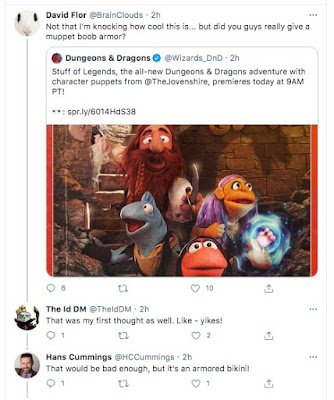 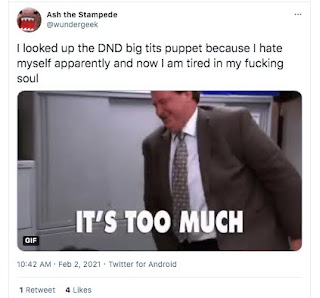 Since I have extensive experience with running a D&D-themed show with women who wanted their characters to have big tits and then being attacked by them about it, here's what to expect:

1. You will be harassed. This goes without saying: you're a woman of color on the internet and you've made a choice about tits that a very nerdy group of mostly-men don't like. However, this harassment might be different than what you've experienced before...

2.  You will be erased. Michael Phillips up there is a good example--your decision about what to do with your character has been reduced to a "half-assed attempt to justify" something your Evil Corporate Overlords want to do. This is because it is morally inconvenient for this white nerd to acknowledge that marginalized people they allegedly want to defend don't care about all their dumb nerd shit.

3. Your friends and allies will be harassed. You'll notice some of them up there do acknowledge you exist. Some of the harassers will be self-aware enough to do that, which means they will default to simply pretending you don't exist and attacking the first not-obviously-marginalized people connected to you and pretending your muppets' tits was there idea. The puppeteer, the DM, but probably mostly the people at D&D. 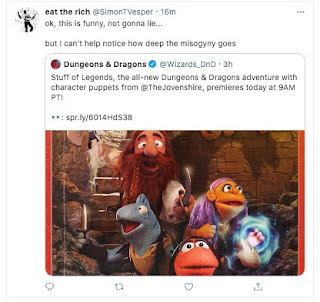 4. Your muppets tits will be considered an important datapoint. Since all indie RPG people are pathologically worried about what the Coca-Cola of the ttrpg industry is up to, your muppet's tits will be used to raise the stakes in any conversation about representation. Your muppet boobs will be used as evidence in arguments about D&D being bad that you will never see. 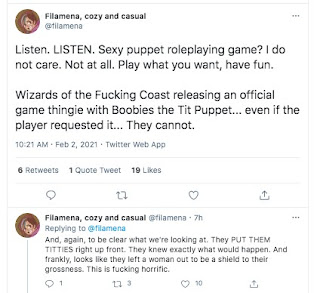 5. Lots of these harassers' friends will be fine with your muppet's tits, but they'll stay quiet. Basically tabletop RPG people have to pretend that women don't have varied and nuanced ideas about how they want to be represented because sacred crackpot Ash Kreider says boob armor is bad and other people in the indie scene can't be seen to public disagree with them. The internet dynamics where the people with the most reasonable take participate least in the discussion unfortunately apply here as well. You will have customers, fans and supporters. They will not help you.

6. These raised stakes will result in a conversation, from which you will be excluded: This is the saddest, stupidest, and most self-defeating part. Your decisions will be fought over, but no-one will talk to you.

A) Tremendous subcultural pressure on respected RPG commentators to agree that boobs are bad or else be quiet and lose work, and

B) Tremendous subcultural pressure not to admit they're disagreeing with the black woman whose choice they are attacking, and

C) You're dealing with online nerds who conflicting needs to always complain and always avoid confrontation with whoever they're complaining about even when it's not someone from a marginalized group they want to speak for and over...

...there will be a raging discussion of the meaning of your muppet's tits and you will be ignored during it. The idea that you are a person who might have had reasons for your decision or might even have already thought about its socio-cultural implications and come to your own conclusions before they did will be ignored. The nerds casually assume they are smarter than you--so much smarter that it does not even occur to them to consult you when complaining about your decision.

Despite the mob's insistence that "debate" is an icky masculine-coded strategy for discussing issues, the idea of employing some alternate soft-coded strategy like inviting you in to have a conversation about their ideas will not so much be dismissed as literally never considered. Repeat: It does not occur to them to treat you as a person. 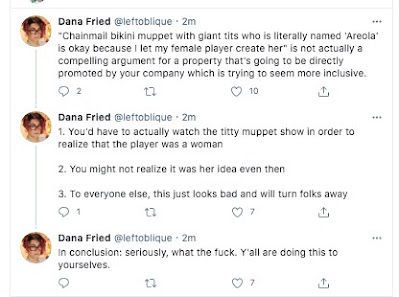 Seriously--why would this white genius not simply talk to you if they had a problem with your decision?

Hopefully none of this will matter. With luck, your show will be popular enough that these nerds will see the fight they're picking isn't worth it and will just ignore you altogether and this can be treated as the unbelievably terrible internet trash that it is. If not, it will suck and you will continue to be discussed and ignored unless you eventually stop working on the show and start saying things the scoldy mob already agrees with.

Although you probably will never see this, I am genuinely sorry we haven't been able to fix this problem for creators down the line. I tried, but not hard enough. I hope your show does well.

And there's nothing to do be done to fix it. Libel doesn't even cover lots of of these, and its not illegal to do any of this shit, just shitty.

okay well i dont know any of that, and also breaking the law is tiered regardless. if you get a parking ticket you broke the law but nobody will publicly shun you the same way they will for being a p*do, for example

luckily for, well, all of humanity since the dawn of time there are other consequences the law can levy besides public shunning

why be vague, zak?

i assumed you knew what the consequences of being sued are. if you don’t you can ask

depends on what you're being sued for and why.

usually involves a check. sometimes people do public apologies, but usually its fairly difficult to force something like that out of someone, depends on the country. rare in the states.

but getting sued and losing doesn't really stop this kind of behavior, lots of people on the internet are stupid. there are people that have gone to jail for cyberbullying because being told "fucking stop, right now" by the cops twenty times didn't register. And then they just get out of jail and start doing it again.

And there’s nothing wriong with getting a check.

Erased. No misinformation allowed on the page.

It seems to me that, given the nonsense we've seen in the RPG community to date, WotC should have been able to anticipate the negative response - do you know if they made any attempt to proactively deal with this type of negative reaction? If WotC made any attempt to get in front of the backlash, perhaps with a public interview with Shanna Malcolm, where they can at least get her on record?

I am so glad you have strong morals, and I hope that this series does well, I hate that there is even a platform that allows such bubbling muck to get sprayed everywhere. I can only hope that she sticks to her guns and doesn't allow this to affect her decision. I have no clue why having big tits makes you more of a target, some people have them, just like a big nose, and to assume that she was forced into it nowadays with such a large company and such a viewed medium is such a pessimistic view. If she wanted it and has said so to many people, and they disregard this entirely, the story of people pushing because of their false views seems to always repeat. Misinformation and ignorance are truly tyrants, and I cannot understand how someone can build their character on such a foundation.
Makes me wonder if they even have fun playing RPGs, or if they just like to ruin other peoples play.
Thank you for putting out a message of positivity despite the odds.

There's no advantage for them to doing that.

Like, my guess is: you (an RPG fan) have posted about this here but not anywhere else. You probably don't want to interact with the mob or fact-check them or take it on yourself to address their hatemongering.

Since you don't (and most reasonable people don't) then any step WOTC takes will fall on deaf ears:

-Reasonable people who care about actual people will just say nothing and watch it if they feel like it, and

By ceding the field to the hatemob, fans have made the company's attempt to stick up for this woman useless.

Until people atart being as activist about really helping marginalized people and creators as they are about promoting themselves via aggressive prudery, then there isn't an audience for company trying to do the right thing. IT will only cost them.

Fine. I'm going to do the right thing and ask those people what's their problem with women who want their muppet characters to have big titties.

Are we still allowed to torture muppets or is that taboo and racist now?

For one, its much funnier than these @name erased posts.

And for two, I personally like it when you dunk on the dumbs.

That being said, I respect you may have lost a taste for engaging with shitheads after The Mandy Incident.

since people into internet drama as entertainment are usually evil and always boring, those seem like good reasons to keep just erasing misinformation

please dont send me a blind link and ask me to comment on it and then ask me to erase your comment.

email me at zakzsmith AT hawtmayle dawt calm, say what you’re talking about and what the link is (either by writing it out with a cut and paste) then ask a specific question.

Erased. You were told months ago "You're banned until you correct your incredibly lonnnnnnng record of misinformation and first-strike personal attacks"

Why are you still trying to comment? Did you think I'd just forget?

That Venger? The fuck does he want? Were you two ever friends?

No, we were never friends.

3. Which thing is admin abuse and why?

Why wouldn't you help me out?

You're banned until your motives stop being evil.

Nothing you say can ever be relevant or meaningful until you apologize and make real efforts to stop being a jerk, so if you send a comment and it doesn't contain that, you might as well be sending it into the ether.