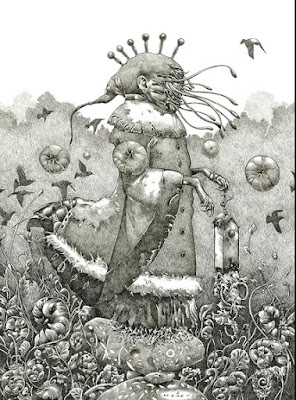 -Zak, why so few updates? Because I'm writing 3 RPG things at once: Edits for Demon City based on playtest feedback and going back and forth with the graphic designer, a secret project for Lamentations of the Flame Princess, and a brand new superhero RPG with a new system kinda based on the Demon City system tentatively called I Am The Weapon. If you got questions about it, ask in the comments. Plus waiting for James to get back to me about Violence in the Nypharium. 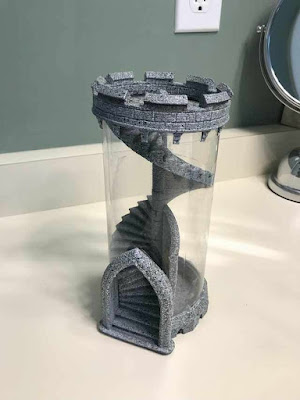 -This is the only dice tower I have ever seen that made the idea seem worth the table real estate. And it's home-made. 3d printed plus a soda bottle I think.

-At Gen Con, because there's usually a lot of people, I usually run an informal player-vs-player D&D game (and jesus is it fun), and Michael Pfaff (player in the last one) has pretty well laid out here how I run it.

-Podcast interviews! Many interviews on many topics, surprisingly few repeated things:
-Speaking of, James Raggi has gotten better and better at being interviewed over the years and this is a wonderfully cogent one he just did. Really speaks to why I love working with him and you should enjoy it now while it lasts.

-I guess I might be kinda sheltered since most people I know who are professional writers of any kind read a lot or were people I met while reading but I was...shocked is the wrong word...I was surprised my suspicions confirmed on levels I didn't know were possible by this question from a grown up RPG writer on twitter.

-OSR dude Chance Phillips is 15 years old and is on his third successful RPG kickstarter kind of blown away by that. He also won Lamentations of the Flame Princess' Brutal Youth contest. The world is kind of a great place, in its way.

-A hour of spooky organ music seems like a useful thing to have at a game table for like Death Frost Doom or something.

-There are job openings on the Warhammer team.

-Someone started a Demon City subreddit, which is weird since the game's not out yet but I'm not complaining.

-David McGrogan, author of Yoon-Suin and maybe the best world-builder in the OSR? has some notes up on a new thing. From what I said on Google +:


Aside from just sounding like it'll be an interesting project, I like how the factions work. The tree is undeniably there and has every quality the different factions claim it does, but the different ones care about different parts of it.That seems to be a metaphor with a lot of legs in terms of fantasy worldbuilding, which usually goes the other way and emphasizes many gods and each god having one set of attributes. Or which hides this structures under a more normalizing Christianity or equivalent.

-His take on Lamarckian orcs was also next-level.

-Comments on the last post have been pretty interesting. Some good, some among the most insane you'll ever find on the RPG internet.

-More Demon City designs from Shawn Cheng coming in. His layouts are such a force multiplier, every artist should have somebody like him on their side: 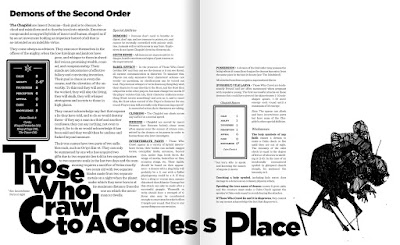 Email ThisBlogThis!Share to TwitterShare to FacebookShare to Pinterest
Labels: art, i am the weapon, plugs

As it's "kinda based on the Demon City system" will the new superhero game be utilizing dice rolls? Or are you envisioning a different style of play (a la the tarot system in DC)?

Dude. That dice tower is awesome!

Thanks for the shoutout. Hope we get to play again at some point!

Really excited about the nympharium.