A Red and Pleasant Land, also known as Eat Me*, also know as The Alice in Wonderland setting I'm doing for Lamentations Of The Flame Princess is being laid out.

Uncertainty sucks, of course. It's supposed to be out this summer. It's very close, but we're also trying to make it perfect. Completely perfect and bound in some kind of gold-embossed insanity and just generally long-lasting and exactly right head-to-toe because it's gonna look like nothing anybody ever saw.

So anyway, it's coming, but since I'm not doing the layout myself I don't know how fast.

Meanwhile, my players have sailed to The Red and Pleasant Lands themselves.

After a few hours in the forest, they've stumbled on a wedding. Here's how weddings work: 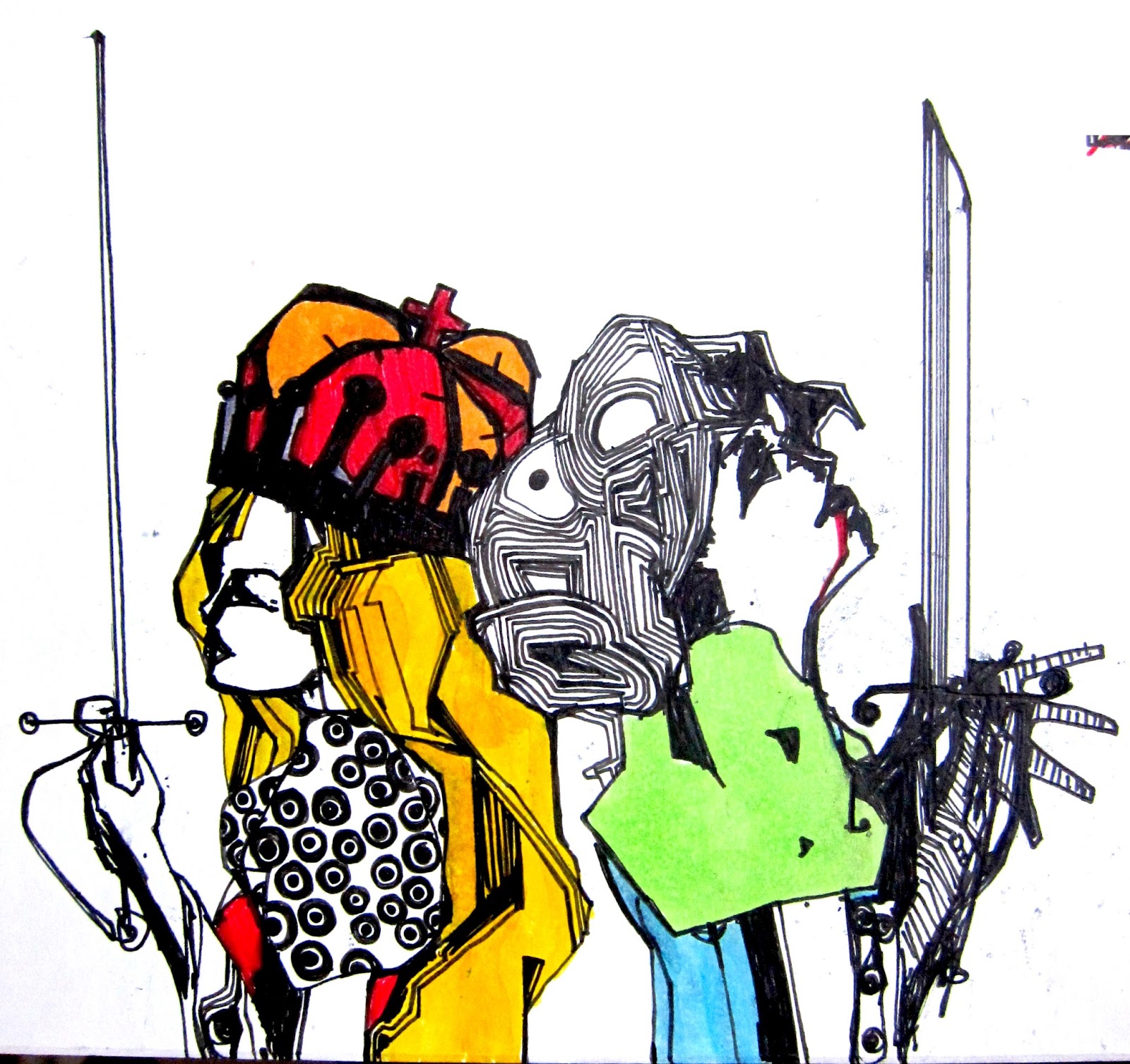 Rites of Engagement and Kidnappings
The vampire houses have weaponized the institution of marriage. Unions are not considered valid unless the partners slay a member of an enemy house in fair combat during their own wedding. In practice, this means couples planning to wed must contact another couple of a rival house and agree to have a duel/wedding called a Rite of Engagement. Antipriests of both houses preside. The surviving pair (if there is one) anoint each other in the enemy's gore to consolidate the union. Polygamous marriages are not unknown in any house, and their announcement causes even greater anticipation and consternation than standard marriages--being, of course, bloodier affairs.
The Nephilidian rite is slightly different: foes must be slaughtered at a wedding, but they may be captured beforehand at any time and need not be able to defend themselves.
Kidnappings of brides- or grooms-to-be for ransom are common and the task of rescuing them is often hired out to outsiders, as the incestuous nature of Voivodjan society and volatile state of its politics can make the discovery of the culprit embarrassing. (The agent behind the kidnapping frequently turns out to be the betrothed him/herself, attempting to avoid an arranged marriage or death at the hands of a rival couple.)
-
-
_
*For more information click the Eat Me tag.
-
-
-

Email ThisBlogThis!Share to TwitterShare to FacebookShare to Pinterest
Labels: campaign, DnD, Eat Me

Thats the same thought I had while reading it. It would result in some interesting family relations and some potentially very unhappy marriages.

Not nearly as unhappy as when both brides don't survive. Unless that was the plan - vampires are devious and forever is a long damned time to stay in the closet.

Completely perfect and bound in some kind of gold-embossed insanity and just generally long-lasting and exactly right head-to-toe because it's gonna look like nothing anybody ever saw.

Two things: first, I completely support you in this quest for unreasonable perfection, and you and the LOTFP folks should take as much time as you need to achieve it, and second, and seemingly contradictory, OMG just hurry up and take my money!

I can't wait to read some actual play reports from Voivodja. Some questions come to mind. A group of PCs comes upon a bunch of well-dressed people trying to kill each other. At what point do the PCs become aware that the spectacle they are witnessing is in fact a wedding, and not some kind of complicated duel? If the PCs try to jump into the fight, will the Voivodjans think that they are declaring their availability as potential spouses?

If a wedding requires combat, does elopement imply assassination?

thank you for the update about the book! I am paranoid that I am going to miss it.